Mitregi with compounds of duals

These variants put an extra border around the Gnu Qi and Wildebishogi array in much the way that Wildeurasian Mitregi does the Wildeurasian Qi one, adding forward-only (FO) versions of the pieces. GNUQI MITREGI differs from WEA Mitregi in its smaller board and lack of Hopping pieces and each army having its own River. WILDEBISHO MITREGI differs further in having no Rivers, allowing everything to return from capture, and allowing promotion of simple symmetric pieces.

My first thought was to put an extra border around the Wildebeest Chess array, but this made for an excessively large board. These variants include none, for example, of the Wildeurasian Bestiary long-range leapers but have several short-range pieces, especially as promotees. The positioning of simple FO pieces a file outwards of, as well as a rank behind, their symmetric counterparts leaves a large enough empty middle of the new rank far enough to fit compound ones in. One decision unaffected by expanding a smaller board was that of putting FO forms of left-side pieces on the right side and vice versa, to reduce the imbalance.

I have since developed this idea into a whole series of variants, inspired by Mitred Framing 1: 8x8 to 10x10. As a back-formation of these I have realised that Gnuqi Mitregi can also be played with Frontofhouse (FOH) promotion and reintroduction rules. I also add what I term TOYANG promotion rules, designed specifically for a large board. This name refers to adapting Mitregi armies for use on a larger board by remocing short-range pieces, substituting larger numbers of longer-range ones, and promoting FO ones to Yang Qi Hopping-capture pieces (and their compound). As Pawns are not a Shogi (or traditional Shogi variant) piece, Pawn promotion is a special case. Since I devised Toyang promotion I have used it further in Yonin Toyang Mitregi. Daniil Frolov used a modified version of it some years later in his Gi-Qi-Game. 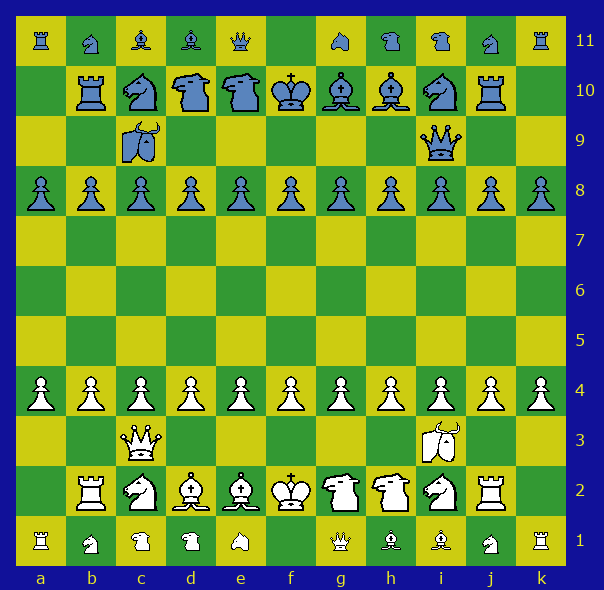 Array pieces, unpromotable in all variants:

Array pieces, promotable in some or all variants: Promotee-only pieces, all returning as whatever they were promoted from:

In all variants a promotable piece may be promoted on entering, moving within, or leaving the four ranks of the enemy camp. A piece with no further unpromoted move, or in Gnuqi Mitregi a Pawn entering the enemy camp, must be promoted.

In Gnuqi Mitregi the King, Queen, and Gnu cannot enter the enemy camp. They can however interact with their enemy counterparts in the initially empty ranks.

A player may reintroduce pieces captured from the enemy in place of a normal move. They must return forward-only in FOH Gnuqi Mitregi, and unpromoted in the rest, on a cell whence they have an move in that form.

Check, Checkmate, and Stalemate are as in FIDE Chess. Variants with Princes inherit Wildeurasian Mitregi's rule that a player wins if they have the maximum 4 Princes and the enemy does not immediately capture one.

These variants can be played with two Shogi sets distinguishable by size - large for symmetric pieces, small for their FO counterparts, and a mixture of Points for Pawns. When these are promoted one size can be used for each kind of promotee, with a swap being made with a Point of the other size if the chosen promotion calls for it. A common pool of the 16 spare Points could be set aside for this. Note that one kind of symmetric piece and its FO counterpart - probably the Camel and Hump - will be represented by the physical Goldgeneral piece and therefore require special treatment for promotion. This could be represented by putting a spare Point underneath - only half the pool could ever be required for this purpose. FOH Gnuqi Mitregi can be played with two identical sets, with the promoted/unpromoted distinction replacing the large/small one.