Over the years I have taken more interest than many, even among Chess variant enthusiasts, in Chess in different geometries. It was to my interest in hex geometries that JÃ¶rg Knappen attributed my use of the Knave and Debtor in square-cell variants, and I am inclined to agree. With the help of comments from Ezra Bradford I have been able to meaningfully equate certain pieces on the geometry pioneered by Mark Thompson in Tetrahedral Chess with m:m:n and m:n:n leapers in the cubic one. However it is to the cubic geometry, the one first inspiring me to stumble upon the Chess Variant Pages all those years ago, that I keep returning. Here I look at adding Shogi-style pieces (and other Shogi features) to a game with pieces more familiar in 3d.

Existing variants can be modified without array modification, first by allowing return from capture and second by the Frontofhouse principle of symmetric pieces returning with only their most forward moves and having to recover the rest by promotion. Thus Rooks return as Wings, Bishops as Mitres, Queens as Princesses, Unicorns as Horns, Duchesses as Countesses, and Governors as Missionaries - and it is that last, 3d-specific, FO piece that gives this page its name.

Actually including FO pieces in the array - along with generals - is something that I did with Tunnelshogi, but that was dominated by relatively weak pieces. One way that I saw of using the full range of pieces was by taking the 6-rank version of Simple Tunnelchess and putting another layer of cells around it on every side, with the forward-only pieces added not directly behind their symmetric counterparts but behind and outward in the style of Mitred square-cell and Horn Rimmed cubic variants. Generals are then fitted in to fill out the back rank. Ranks being planes of 6x6 cells as a result of the added rim of cells, the front rank is filled with the Stockbrokers that I have made my usual front-rank piece for cubic-cell ranks this size or over.

The board has eight ranks numbered 1 (White's back rank) to 8 (Black's back rank), six filestacks lettered a to f, and six levels lettered u to z. Cells are designated by the level, then the filestack, then the rank. For example, White's Emperor is on wd2. The same array is use for three subvariants depending on how pieces are promoted. The following is a representation of each player's back and middle ranks, using the first three letters of each piece type. 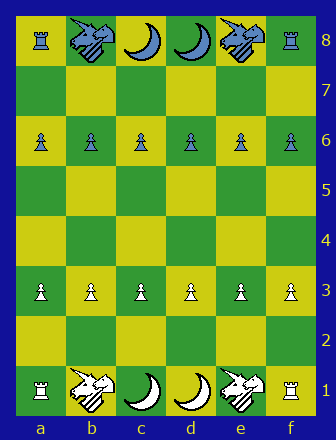 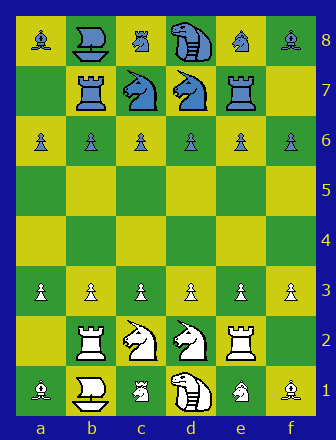 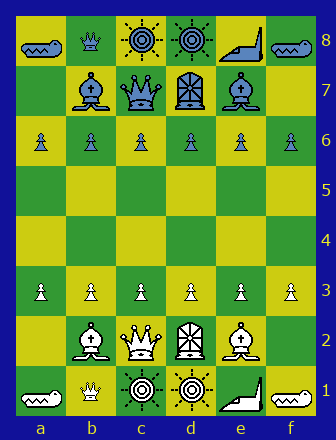 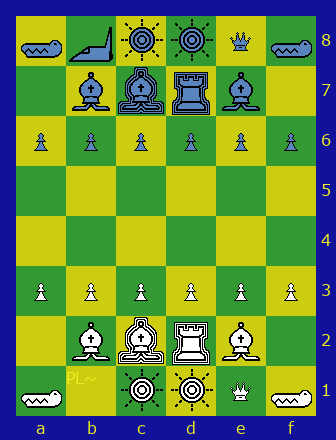 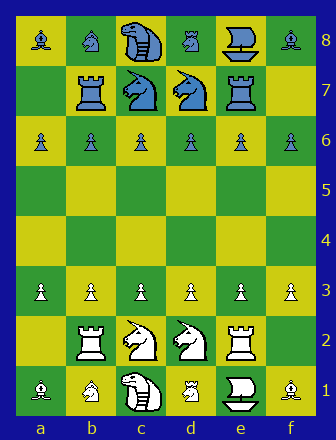 Level z
same as level u

Other middle- and back-rank pieces are grouped in six families. Each family comprises a symmetric linepiece moving any distance through empty intervening cells, after which it is named, a general moving just one step in the linepiece's directions and all other forward directions; and the original linepiece restricted to its forward directions.


(1) noncapturing if orthogonal (from Point via Broker);
(2) noncapturing if SD and to a file the same distance in/out;
(3) capturing if SD and to a file further in or out;
(4) capturing if ND, including "cutting a corner" with no change in distance in/out (from Saltire via Broker).
For examples of how its moves break down in individual files, see Brookschach or Courier Leapale. Its promoted form is the STOCKBWAITER (the B stands for Butler), which is the Steward analogue. The Stockbwaiter can move as both player's Stockbrokers, and also make a one-step noncapturing move along a same-rank SD or inward/outward orthogonal.

There is no double-step initial move, En Passant, Castling, or Cathedralling.

Promotion occurs on entering, moving within, or leaving the three ranks of the enemy camp. Pieces are promoted to, and return as, the following members of the same family:

Promotion rules have been designed so that Missiogi can be played with two distinguishable groups of four identical Shogi sets, and the other variants with two FIDE sets and four identical Shogi sets. The FIDE King is used for the Emperor and Shogi Points for Stockbrokers. The following Shogi/FIDE pieces are used for promotable/unpromotable pieces in each family. As the Goldgeneral is unpromotable in Shogi, promotion of the piece represented by it involves substituting the Shogi King.
* Queen family: Gold/Queen;
* Duchess family: Rook/Rook;
* Rook family: Wing/Pawn;
* Governor family: Bishop/inverted Rook;
* Bishop family: Silver/Bishop;
* Unicorn family: Helm/Knight.