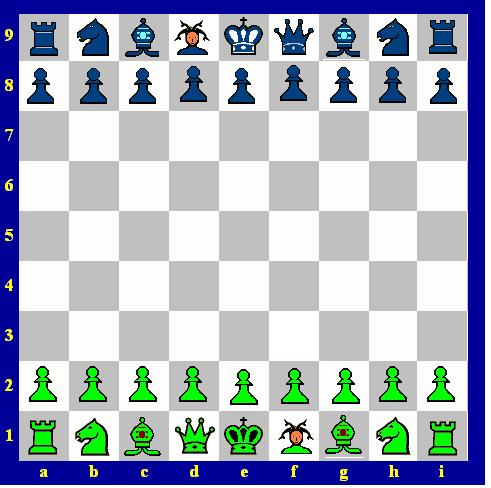 IMPORTANT: Each player can switch places of his (or her) Medusa with either Morph-Bishop. This counts as a move, and can only be done once. This positional swap has the advantage of giving you both a light and a dark-squared Morph Bishop. Once the Morph or Medusa move, this switch cannot be made (But if only one Morph moved the switch could be made with the other which has not moved).

If a King is in check, a Medusa moving next to that checking-pawn or checking-piece will effectively turn that pawn of piece to stone, nullifying the check. It is important to note that if a Pawn is about to promote, it is a mistake to think you could move a King next to the square of promotion and capture the Pawn just as it promotes to Medusa. The reason: The Medusa would instantly turn the King to Stone (effectively checkmating the King unless another piece (not adjacent to the Medusa) could capture it. A pre-set link is at this location: /play/pbm/play.php?game%3DMini-POM+%28Mini+Pillars+of+Medusa%29%26settings%3DMini-POM Also See: Pillars of Medusa. (c) 2006 by Gary K. Gifford