This page is written by the game's inventor, Nick Wolff.

Lately, I have become intrigued with developing ways to eliminate "opening book" play in games, but trying to avoid randomization. One of the most effective ways that I have found is to have pieces who's movement and capturing abilities are dependent upon conditions on the board. To my knowledge, two of these pieces, the CopyCat and the Mimic, I have developed on my own (though the Mimic closely resembles the Morph in Gary Gifford's Pillars of Medusa), and the last piece (the Chameleon) was borrowed from the Ultima games. This creates a rather in-depth game. I chose the Mimic as this game's namesake because out of the three, it is my favorite.

Mimic Chess is played on a 10x10 board setup as in the diagram below. Honestly, the king and queen are in reverse symmetry by accident, but I have already published a Zillions of Games file with that setup so here it is to stay. Chameleons rest on the first rank of each side at d1, d10, g1, and g10. The Copycats start at b2, b9, i2, and i9. The Mimics start as Mimic Kings and are at c2, c9, h2, and h9. 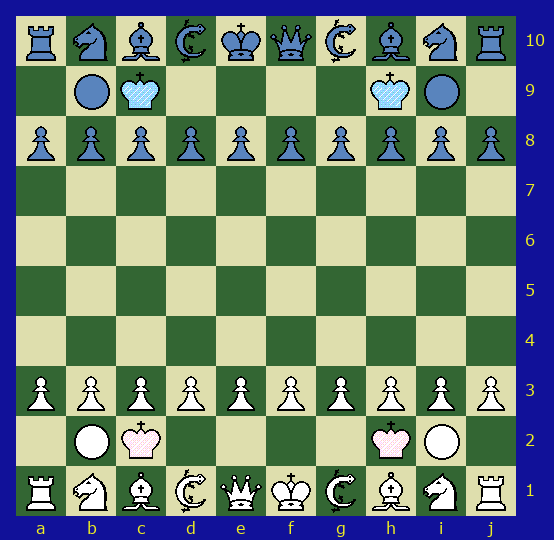 The most basic of the new pieces is the CopyCat. The CopyCat moves and captures with the current abilities of any piece that is orthogonally or diagonally adjacent to it, including other CopyCats. A CopyCat can capture en passant or even double step if on the 3rd rank of the board for the perspective player. A CopyCat that is not surrounded by any pieces cannot move or capture. CopyCats can't promote.

Mimics appear as a pink (for white) or blue (for black) shaded piece with the outline of the piece it is Mimicking. Mimics start on the board as Mimic Kings. They move and capture as the piece they are Mimicking. Unlike the Morph in Gifford's Pillars of Medusa, a Mimic is mandated to Mimic the piece is most recently captured, changing the way it looks, moves, and captures until it attacks again. Upon reaching the last row, Mimic Pawns must promote, but only to another Mimic piece. Mimic Pawns can en passant as long as all conditions are met to make this moves with a regular pawn. Mimic Pawns can make a double jump as long as they are on the 3rd rank of the board for the perspective player. Mimic Kings are NOT royal pieces. Mimics are all independant of each other - if a Mimic captures a piece, ONLY that Mimic makes the mandatory transformation. The other Mimics on both sides remain the same.

The Chameleon moves, but does not capture, as a FIDE Queen. It captures a piece by moving exactly how that piece captures. For instance, if it wants to capture a Knight, it must attack the Knight by jumping exactly as a Knight does. This extends to being able to capture a CopyCat with the potential that CopyCat possesses. Chameleons can't capture other Chameleons.

All FIDE pieces move and capture as they do in a normal game of chess.

The object is to Checkmate the enemy King.