This game combines various strands of Jewish-themed hex variants on a large enough board to include nearly all their pieces. I would say all, but the General from Anglojewish (AJ) Chess and Flatstar is not included, as this is only a King stripped of its diagonal move on a board lacking the relevant diagonal. What it does have specifically from those variants is the Finch and Cohen. The latter also occurs in the Proto Prelates Jewish army and one version of Star of David 2 Level Chess while another piece used here, the Sling, appears in the other version. The Fortnight from the Armies of Faith 2 and Proto Prelates Jewish armies is also included, although the latter's Levite is not as it would require at least 3 levels and this variant has only 2. Other pieces are common to all the 3d variants. As several Sinojewish Chess pieces - Duchess, Cannon[ade], Unicorn, and of course its royally-restricted Grandduke - are neither Jewish-themed themselves nor common to many variants that are, I do not include such pieces. This variant can be played using the same 2 large and 2 small FIDE sets that Sling Star of David can, but with fewer pieces left over.

Inherited from Star of David is the form of the board, which is two triangular levels pointing in opposite directions, the central hexagonal areas overlapping to form a 2-level version of the AOF2 Drum. Moves switching level must occur entirely within this latter area, so that Knights and Fortnights - and by dint of where promotion happens, unpromoted Pawns - are confined to it. The two overlaid form a Star of David shape, especially if you notice the edges of one level through the other, and the David in question was of course a King, a piece available in 3d but not 2d hex variants.

In order to accommodate the wider range of pieces the triangles are enlarged compared to the original Star of David variants. This is an increase by nearly two-thirds, The smallest increase preserving both the equal sizes of the triangles and the hex-prism geometry from side 10 (55 cells each) to side 13 (91 cells each) - hence the title. Triangles of side 11 or 12 with a common centre would not line up and would give a Tetrahedral Chess geometry, which would be a greater change from the original Star of David variants than I would wish for. The hex-prism geometry could be preserved with one triangle of side 11 and one of side 12, but this would detract from the star shape. This reduces piece density to just below 50%, in contrast to the denser occupation of the 110-cell Star of David. 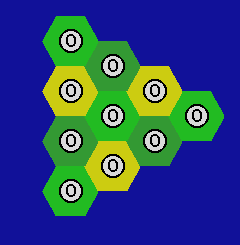 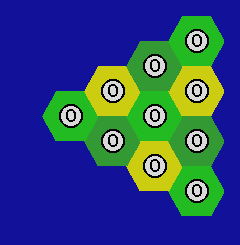 indicate groups of cells only on the other level. The two triangles are put in a Glinski orientation but overlap only partly: from White's viewpoint the empty part of the upper one points left and that of the lower one right. This gives 26 files - 6 initially empty ones bordering others only horizontally, and 14 in 7 two-level filestacks with pieces at each end.

The upper level has the Kings, the Finches, and most of the non-Pawns on the equivalent of FIDE Kingside. 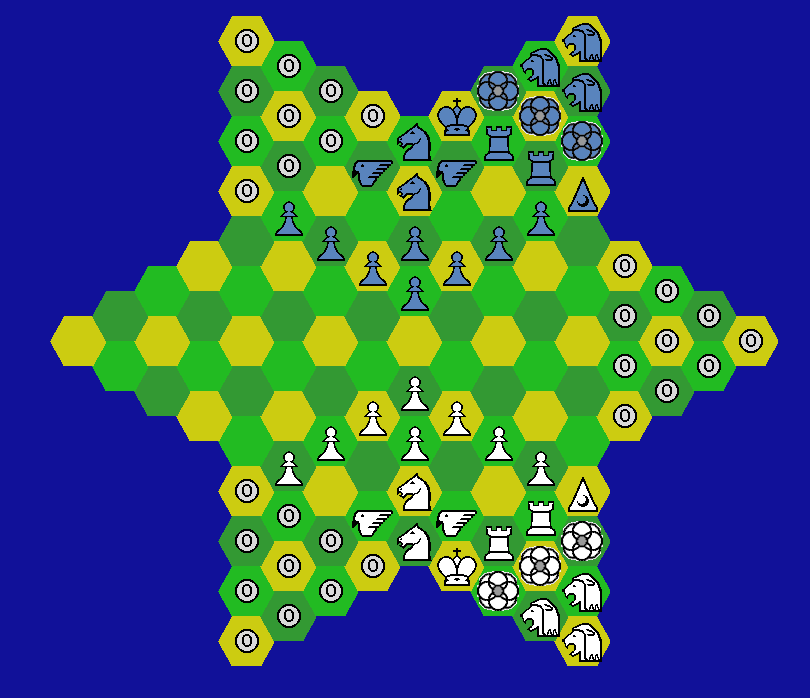 The lower level has the Cohens, the Fortnights, and most of the non-Pawns on the equivalent of FIDE Queenside. 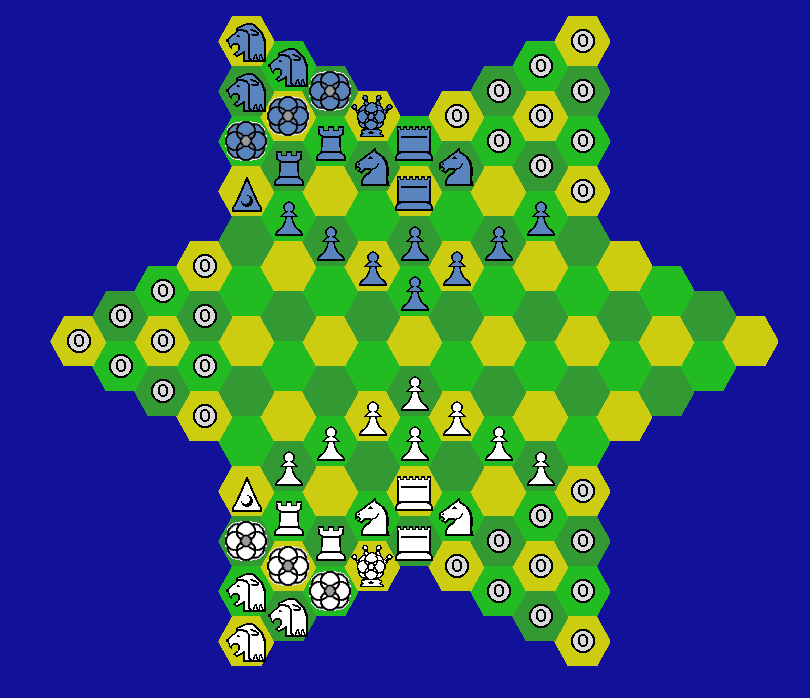 Pieces constant in the Occidental game, represented by themselves from the large sets: Jewish-specific pieces:

A Pawn has an optional double-step noncapturing move from its own or another Pawn's starting cell. Suitably placed enemy Pawns can immediately capture it En Passant as if it had made only the single step.

Pawns with no further move within the Drum, even if they would otherwise be able to leave it by a noncapturing move, must be promoted to any other capturable piece.