This variant is inspired by the divergence between the Pawn substitutes in three long-standing forms of hex Chess. Siegmund Wellisch extended the POINT of Shogi and Xiang Qi to the two forward orthogonals of his hex orientation, an approach also used in Fergus Duniho's family of hex Shogis. Wladyslaw Glinski used a piece diverging between the single straight-forward orthogonal of his orientation when not capturing and the two part-forward orthogonals when capturing; this I term a MIGRANT after Glinski himself. Dave McCooey used a piece diverging between the same non-capturing direction and the two forward hex diagonals, which (along with its cubic-board counterpart) I term a BROKER as a pun on the word Pawnbroker.

These coinages were to distinguish these pieces from the square-board Pawn on a hex-level hex-prism board such as my 3 player Honeycomb Chess uses, but they serve as well in distinguishing them from each other in comparing them. Points work far better on a Wellisch orientation than a Glinski/McCooey one, where they are as weak as in Shogi and Xiang Qi (prior to promotion in all cases). Migrants and Brokers are more Pawn-like but capturing has a tendency to slow Migrants and speed Brokers toward their promotion rank, whereas it has neither effect of Pawns. I eventually resolved this in Chevron Ranks, but that was some while after this variant was first posted. As Glinski and McCooey both use the hex radial for analogues of the Bishop, Queen, and King it is Brokers, whose use of both kinds of hex radial better mirror Pawns' use of both kinds of square-cell radial, that are considered more consistent.

This made me search for some context where the maligned Migrant might be the consistent piece. Having worked so much with the Wellisch interpretation I speculated on how to apply it to FIDE Chess - or perhaps I should say to the Bishopless Los Alamos Chess - in combination with the Glinski/McCooey orientation. It struck me that for this, with only orthogonals being used as square-radial analogues, the Migrant would be ideal.

This gave a variant with Wellisch symmetric pieces and Glinski forward-only ones. With the former so few an attempt to lay a camp out Glinski-style would be ludicrously sparse, so I include the McCooey element of a compact camp. It is these elements from all three variants that inspire the name McGlinWell.

I show the 2-player array, but the 3-player one is easily extrapolated from it: 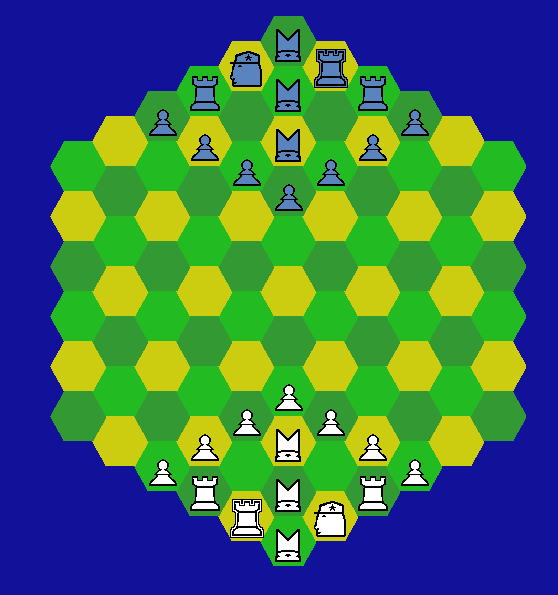 A Migrant on any Migrant starting cell of its camp except the middle one may make a double-step noncapturing move, regardless of whether it has already made one or more capturing moves to get there. It may however be captured En Passant by an enemy Migrant poised to capture it had it moved only a single step.

Migrants reaching the far edges or the cell just before the far corner can be promoted to symmetric pieces captured by the enemy if any have been. Promotion on the far corner is compulsory.

In the 2-player subvariant Check, Checkmate, and Stalemate are as usual. In the 3-player one a player is Checkmated when their General is threatened by the player about to move. That player's pieces are removed from the game and the remaining players then alternate moves starting with the Checkmating one. The last player not Checkmated wins. A player can also win by getting a Migrant to the far corner while having a full complement of symmetric pieces, in both subvariants and even if both 3-player enemies are uncheckmated.

My terminology does not distinguish hex and cubic root-3 diagonals, as the xyrixa geometry establishes them to be the same thing - the combination of the same number of steps simultaneously along an orthogonal and a root-2 diagonal at right angles to each other. One of my earliest variants, Tunnelshogi, uses cubic Vicereines (albeit as promotees) and enhanced Viceroys alongside their square-diagonal counterparts.