This page is written by the game's inventor, Vitya Makov. 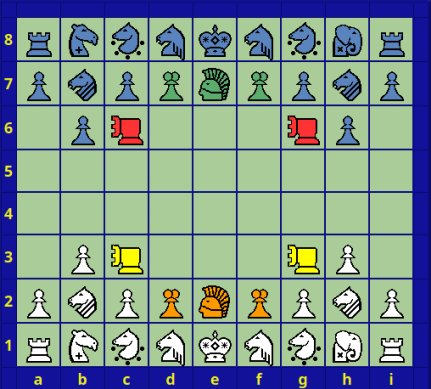 The game is played on a 9x8 board.

Chinese Camel - b1(8). Moves like a wazir or dabbaba, but without leap-ability.

Elephant - h1(8). Moves like a ferz or lame alfil (cannot leap over a piece).

Mao (Chinese Knight) - b2(7), h2(7). Mao is considered to move first one space orthogonally, and then one space diagonally (away from the starting square) to its destination. The intermediate square must be empty.

Charging Knight - c1(8), g1(8). Moves like a Knight for its four forward moves, or moves like a king sideways and backwards.

King - e1(8). The king moves as usual king. The king cannot capture opponent pieces but can recruit (see below).

Pawn - a2(7), b3(6), c2(7), g2(7), h3(6), i2(7). The pawn or soldier moves and takes as a usual pawn, but may not make a double step on its first move. Pawn promotes to gold general at the last rank. The Gold General may move one square vertically, horizontally, or diagonally forward. (In all directions except diagonally rearward).

Silver pawn- d2(7), f2(7). Silver pawn moves like Korean Chess pawn. It can move either one step forward or one step sideways. It can never move backward. Silver pawn promotes to silver general, but to non-colored Silver General, as it can not promote to king.

Silver general - e2(7). The Silver General may move one square diagonally, or straight forward. (In all directions except horizontally or straight rearward.). Silver general promotes to the king at the last rank. So the player can have two kings.

Recruited Silver General - Can not promote to king, so will be non-colored.

Note on Cannon: If there is an intermediate piece, at the wazir position, it can still shoot, dababa-style over that intervening piece.

Another note on Cannon: Frozen cannons can not shoot.

Object of the game is to mate or stalemate opponent.

There is no castling in this game.

Kings can not capture but can recruit (change color of opponent's piece to its own color) opponent piece that stands adjacent to the king, if the king is not checked.

For example: white king on a1 is checked by black pawn on b2. The king cannot recruit this pawn, because the king is checked.

1) Recruit is one separate move. If the king moves adjacent to a piece that piece is frozen. They carry on negotiations as though. :)

2) The King cannot recruit (or freeze) a piece that stands adjacent to its king.

3) The king cannot freeze or recruit another king. Kings are allowed to be adjacent to each other, since they can't capture.

5) Multiple pieces adjacent to a king can be frozen, but color changing (recruitment) needs to be done one turn at a time.

6) Adjacent frozen pieces can remain frozen and unrecruited for an unlimited number of moves.

When your opponent has two kings you need to mate or stalemate both kings to win.

When you have two kings and one of your kings is checked you need to protect this king from mate. You cannot leave it under attack (check). When one of your kings is mated, you are obliged to suicide it (remove from the board). Suicide is one separate move. Your opponent turn to move is after suicide.

When both of your kings are checked, you can save only one of your kings (if you cannot capture or freeze the piece that checks). Your opponent can capture the king left under attack after you saved one.

When one of your kings is mated and another one is checked at the same time, you can save your unmated king (not suicide another). Your opponent can capture mated king or make another move. If he makes another move and your king is mated you are obliged to suicide it by removing from the board.

I think there are three groups of pieces in this game.

Charging Knight is very dangerous in back of the opponents king because of its backward and sideways moves. Also its four forward knight moves cannot be blocked (Mao and Maorider can be blocked).

Maorider is the most long-ranged piece in this game. Gold General is very dangerous against king and it's complicated to recruit it. Chinese Camel can stalemate alone king.