The Piececlopedia is intended as a scholarly reference concerning the history and naming conventions of pieces used in Chess variants. But it is not a set of standards concerning what you must call pieces in newly invented games.

The Manticore (a.k.a. Rhinoceros, Aanca, Spider, i. a.) is a Bent Rider, which moves (most commonly) one step orthogonally, then outwards as a Bishop; and may be considered the counterpart of the Griffon. However, where the griffon seems to be mostly well‐established as a piece in its own right, the manticore has a much more varied attestation.

A version of the manticore is first attested in the Grant Acedrex of Alfonso X's Libro de los Juegos of 1283, where it is referred to as a Rhinoceros (though the word used in the Spanish text is ‘Unicornio’ — i.e. ‘Unicorn’ — the description given is clearly of the rhino) and appears alongside the griffon, which is referred to as an Aanca. This version, unlike modern incarnations, leaps over the first step of its move, making a knight leap followed by an outward bishop move (This ‘ski‐manticore’ move is considered likelier than other proposed translations, including a knight move on its first and bishop move on subsequent turns, or knight followed by forward bishop.).

A reversed manticore, making the bishop move first but with a mandatory orthogonal step, replaces bishops in a variant described in Tim Harding's 1998 article Bring Back Free Castling!; this version is here called the Transcendental Prelate, and its invention credited to George Botterill in the 1960s.

Eric Greenwood's 1980 variant Rennaissance Chess features the Duke, which can make a single orthogonal step followed by a bishop move, as a modern manticore, or vice versa — though here not to an adjacent space. Again, it appears alongside its counterpart, which, appearing as the Cavalier, may also make the stages of its move in either order.

The modern manticore, beginning with the wazir step, appears to receive its first reference from Ralph Betza in 1996, in defining an extrapolation of it into 3D for his Less‐Is‐More 8×8×8 3D Great Chess. Here he refers to it as an ‘Angriff’ (short for Anti‐griffon).

Adrian King's 1999 Scirocco, as well as its sequels and (probably deriving thence) Mark Hedden's Io Chess, uses the modern version (albeit unable to capture with a wazir step in King's variants) under the name Spider, alluding to its eight lines of movement. King attributes this usage (along with Octopus for the griffon, which he, but not Hedden, also adopts) to unpublished material on ‘Generalised Chess’ by R. Wayne Schmittberger — this source may predate Betza's 3D game.

Betza later describes it together with the gryphon, the historical rhino (as the Unicorn), and a number of others in his article on Bent Riders. Here he calls it, “for lack of a name”, an ‘Aanca’ — arguably an unfortunate choice as that is the word, as he himself acknowledges, used by Alfonso X's text to refer to the Griffon! Nevertheless, this has been the most popular name since, having seen use in a number of other variants by various authors.

Charles Gilman, apparently the first to explicitly object to ‘Aanca’, as Spanish for ‘Gryphon’, substitutes “the similar-sounding ANCHORITE, after a kind of religious hermit” (replacing earlier ‘Archdeacon’ — both, like Prelate above, being religious titles maintaining a reference to the Bishop component), using it in several variants, starting with 4 Linepiece Fusion. His Grande Timur Acedrex (GraTiA) features an anchorite which “must make both stages of its move”, presumably meaning, as with the RennChess Duke, a non‐zero diagonal component, while Mighty Like a Rose, the ninth of his seminal Man and Beast articles, describes not only the anchorite (alongside a variety of other bent riders beyond the gryphon), but also the contraanchorite and double anchorite, corresponding to Botterill's Prelate and (in its lame ski‐ form) Greenwood's Duke respectively.

Jean‐Louis Cazaux follows Grant Acedrex in using this piece as the rhinoceros in a number of his variants, starting with Zanzibar‐S and subsequently increasing in size; the original version of Terachess used Grant Acedrex's original knight‐then‐bishop move.

An intermediate form between Grant Acedrex's rhinoceros and GraTiA's lame anchorite, able to leap but only to the knight destinations, features in Jörg Knappen's experimental Seeping Switchers army for Betza's Chess with Different Armies, once more as the Unicorn.

This piece has also been used as the Dragon, in Daniil Frolov's 10×10 game with some popular pieces; the Griffin, in Aurelian Florea's Apothecary Chess — Modern; Wing Chun (after the martial artist), in Tim Bostick's Kung Fu Chess; and the Acromantula (after a species of man‐eating magical spider in J. K. Rowling's Harry Potter series of which Aragog is the best‐known member, and, like Gilman's Archdeacon and Anchorite, retaining the initial A of ‘Aanca’), in H. G. Muller's Team‐Mate Chess. A number of alternative name suggestions, albeit mostly unused in games, are also given in a footnote by Greg Strong to Betza's Bent Riders article; ‘Manticore’, suggested by Fergus Duniho for its reference to another mythological hybrid animal like the Gryphon, is among these, and while thus far unused in published variant descriptions there appears to be a concensus that it is appropriate for future use.

Additional variants of the manticore appear from time to time, but not frequently enough to warrant their own Piecelopedia pages: the compound with the gryphon appears as a Gorgon in both 4 Linepiece Fusion and Frolov's 10×10 game, and (albeit probably as an erroneous description of a move matching the RennChess piece) as a Cavalier in these pages' account of Mideast Chess; Ralph Betza's Tripunch Chess compounds it with the bishop to give the Harvester (alongside the orthogonal‐ranging Reaper and the compound of both, the Combine), which also features in 4 Linepiece Fusion, as well as being the promoted form of Kung Fu Chess' Wing Chun and (as a Tarantula) in Io Chess' Spider; 4 Linepiece Fusion additionally features the Ancress as its compound with the rook. On the weaker end, some variants by Charles Daniel feature a version limited to making at least three steps as a ‘Stealth Anti‐Gryphon’ — in Holy Grail as one form of that game's ‘mutating serpent’ — while his Zigzag Madness has a double‐ended version thereof as the ‘Zigzag Bishop’; Frank McCrory's Horseman's Chess allows its knight move as a lame ski‐manticore, but only when mounted on a Charger; and H. G. Muller's Bent Bozos Chess‐with‐Different‐Armies army features a pair of Chiral Aancas, which are limited to making the turn either clock‐ or anticlockwise.

The most widely‐used move for the Manticore is one step orthogonally followed by any number of steps diagonally outward: a Wazir step followed by an outward Bishop move. Attested variants include leaping over the first step, giving in effect a knight‐then‐bishop move; skipping the first set but still being blockable there, effectively mao‐then‐bishop; swapping the long‐ and short‐range stages (bishop then wazir); and making both stages of its move in either order.

The Manticore may move onto or capture on any of the marked squares, provided all nearer marked squares in the same line are free. Grant Acedrex's rhinoceros ignores (and cannot move to) the blue‐marked squares; GraTiA's anchorite cannot move to the blue squares but still requires them to be empty; the contraanchorite/Transcendental Prelate requires instead the central diagonals to be free (up to the target square) and the Double Anchorite/duke one may take either path. 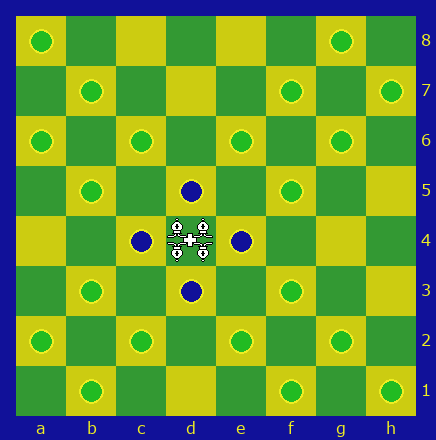 The manticore is colourswitching: it must always move to a square of another colour (on a standard checquered board; corresponding to a bishop binding). It is thus unable to triangulate, or indeed lose the move in general. This also deprives it of mating potential, but it is otherwise powerful enough that it can probably force mate with any other piece that can access the entire board.

The prefix Contra‐, as used for the Contragrasshopper as well as by Gilman, may be adopted in general giving the name Contramanticore for the Transcendental Prelate.

Manticores share with griffons what John Williams‐Brown calls an asymmetrical retreat: on an empty board it can return to a square it left in the previous turn, but since it does so by a different path it may be blocked from doing so in practice. Similarly, it is possible for a manticore to attack an enemy manticore without a reciprocal threat. These properties are shared by the ski‐ and contramanticores, but not the two‐path one (which may be part of why the latter was chosen for RennChess).

H. G. Muller has measured the (modern) manticore's value (in the context of both FIDE and Team‐Mate Chess) as approx. 8 pawns on an 8×8 board.