After applying my Nearlydouble principle to FIDE Chess, to an established large variant, and in modified form to a 3d variant, I wondered about applying it to East Asian variants - and ultimately decided against it. They simply did not have enough long-range pieces, and I could not find the extrapolations of short-range ones to solve that. Indeed the Xiang Qi camp could itself accommodate its own army enlarged (see notes).

That might have been the end of the story, but I then recalled a variant replacing Xiang Qi's short-range pieces with long-range ones on its own board. I refer of course to Fergus Duniho's excellent Yang Qi. Well if the original pieces made a satisfactory game on the original board, I deduced that the replacements would still hold good - along with my usual Nearlydouble Knight enhancement - on a board nearly twice the size.

The next question was the exact size of said board and the related question of its shape. 13x14 was too large, being just over instead of just under twice the XQ/YQ board's size. I considered 13Â², but could not initially find a satisfactory array Pawn structure using fewer than 19 Pawns - again the wrong side of twice the original. I have now solved that problem with Strong Yang, which due to its different board shape has its own page. Eventually I settled on 11 files by 16 ranks, which at 176 squares is nearer twice the original 9x10. To compensate for the effect of this on Pawns I lengthen zones for both double-step moves and promotion.

That just left the matter of a name. Firstly there would be no Qi because:
(1) it really has little connection to Xiang Qi (I have not even ticked the XQ box), and
(2) as I have no connection with the U.S.A. the pun would be inappropriate.
As there was now the potential for two versions, Yang Nearlydouble was not distinctive enough. For this version I therefore settled on Long Yang which has three things to be said for it. Firstly it's (paradoxically) a nice short name. Secondly its end-of-word alliteration echoes such major Chinese conurbations as Chongqing and Hongkong, and the latter's Hang Seng financial index. Thirdly it accurately describes the drawn-out nature of the board, with players sitting at opposite ends. I am not aware of Long meaning anything in Chinese, but I would not be the least surprised if it did. 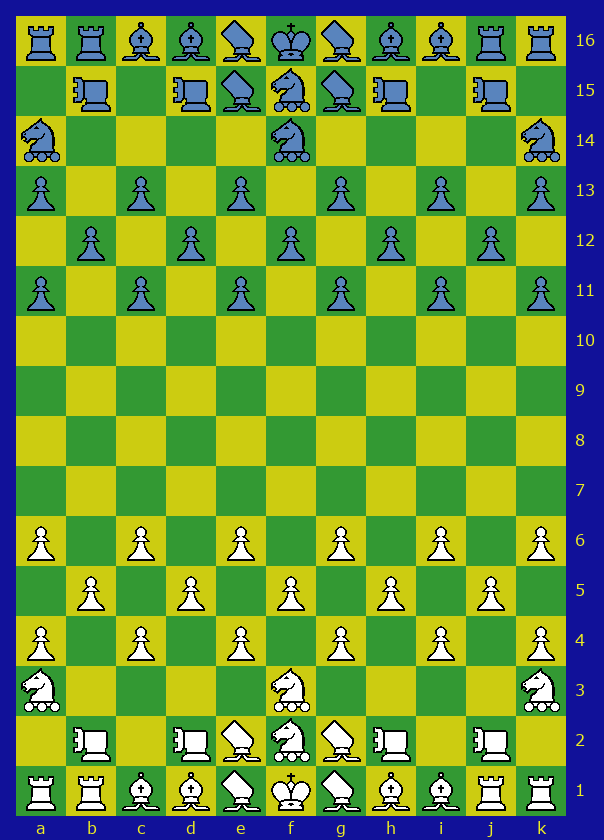 Just as Yang Qi can be played with a Shogi set (a Xiang Qi set has too sparse a front rank), matching piece for piece (except with Shogi's Rook and Bishop representing a single piece type, and a sparser front rank), so Long Yang can be played with most of two Shogi sets. It can also be played with two identical FIDE sets, with each piece as itself, plus one Pawn and the non-Pawns of a smaller FIDE set, with for example its King/Queen/Rooks as Cannons and Bishops/Knights as Arrows.