It is surprising that I didn't have the idea behind this variant sooner after first looking into the area of hex variants with an East Asian influence. Perhaps even more surprising is the fact that Fergus Duniho, inventor of Yang Qi itself and a family of hex Shogis, did not beat me to it! All the problems of a hex Xiang Qi - a satisfactory Elephant analogue, a River suiting the geometry, promotion by adding sideways moves - are irrelevant to a hex Yang Qi.

On starting to devise such a variant I thought that I saw why it had never been done before: fitting in three each of the colourbound pieces, one to each binding, proved fiendishly hard. Then I realised that there was no need to! Yang Qi deals with colourbinding with the King Swap, and has an array with each player's Bishops on one binding and their Arrows on the other. Logically a hex version should have an equivalent rule. On that basis I did not even require three of any piece, so I began again with the same number of each piece as its Yang Qi analogue, placed without regard to binding. This realisation gave me a great sense of liberation. With 1 King analogue, 2 each of five other piece types, and 9 Pawn analogues the set could even be physically represented in the same way as Yang Qi. The most economical approach is a Shogi set with the Rook/Bishop distinction ignored, but others include 2 identical FIDE sets with half the Rooks inverted or 2 Xiang Qi sets.

To give a similar piece density to Yang Qi I decided to use the commonest size of hex board, which has only one more cell than the XQ/YQ board, and stick to only a 2-player game. The orientation was always going to be Glinski/McCooey as this gives the Broker the same ratio of capturing to noncapturing moves as the FIDE/YQ Pawn. Contrast this with Dr. Duniho's hex Shogis and my attempt at a hex analogue of Xiang Qi, Trebuqi). These use the Wellisch orientation to give pieces restricted to the forward orthogonal two such orthogonals. It is on the hex diagonal that forward-only pieces have multiple directions, as they do on the standard one (SD) in Mitregi and on both kinds in Tunnelshogi and the Missionary variants.

It is also worth comparing with my 3d variant Weltschach, which features pieces with many of the same names as I equate the 3d nonstandard diagonal (commonly called triagonal) with the hex diagonal. I justify this based not merely on their having moves of common length but on the fact that steps of each can be expressed as an orthogonal and a standard-diagonal step at right angles, the first on the cubic board itself and the second on a Tetrahedral Chess one. I also justify it on the grounds that the Bishop and Arrow of Yang Qi reappear, unbound automatically by the geometry rather than by any square-board King Swap or equivalent, to join the Unicorn and Sling in the 3d 5 level extrapolation of Liu Yang. 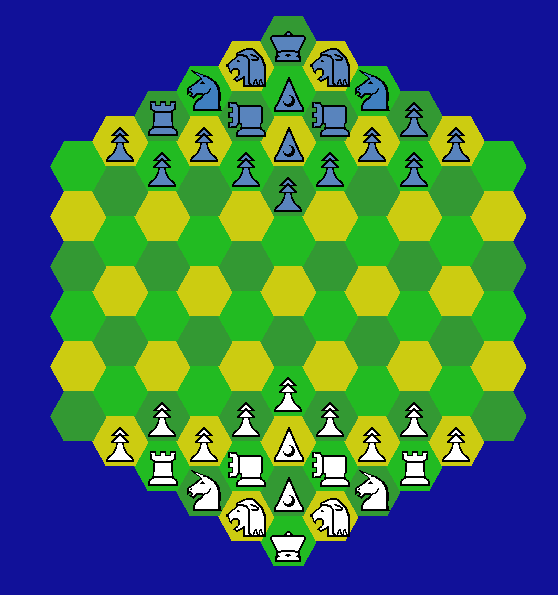 The five middle Brokers have an optional initial double-step noncapturing move, but the rest do not. This is analogous to some but not all YQ Pawns having such a move. A Broker so moving can immediately (but no later) be captured En Passant by an enemy Broker, regardless of where that enemy Broker started.

The Grandduke, if not in Check, can swap places with an adjacent piece of its own army, other than a Broker, in place of a normal move. This is how Unicorns and Slings get to move from one binding to another. This is analogous to the YQ King Swap. An oddity is that on the hex board pieces can be adjacent only on the orthogonals.

Brokers ending a move within the enemy camp can be promoted to any piece captured by the enemy. If there are no such pieces, Brokers cannot be promoted and cannot move to the far rank, although they can still put the enemy Grandduke on that rank in Check by being a diagonal step away. This is analogous to YQ Pawn promotion.

Check, Checkmate, and Stalemate apply to the Grandduke as they would to a FIDE King.

If anyone wants to try a win-by-marriage subvariant, the appropriate promotee is the Duchess, the compound of Rook and Unicorn.

Since I posted this variant the same combination of letters (I do not know what the intonations are in the original) have come to prominence as the name of China's first woman in space. The following links mention more of the launch of her flight and her background.