This page is written by the game's inventor, Michael . 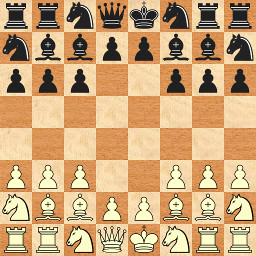 An alternative starting position, where each player starts the game with 4 rooks/bishops/knights, 1 king and queen, and 8 pawns. The standard chess board is used.

I have found the play to be fun and well balanced. It is challenging both strategically and tactically. The opening stage requires a fair bit of maneuvering, with much scope for self expression and creativity. Castling can be a tricky challenge, due to the crowded board, especially with the extra rooks being obstacles. However, I have found this to be an interesting strategic consideration, which depending on the position can make castling just as critical to the outcome of the game as with normal chess.

* It is possible to play Latte Chess against chess engines. I have played it using several different engines (although a few I tried seemed to be unable to play it, complaining of illegal moves after the first few moves).

* Play Latte Chess in your web browser at apronus.com

1. Luft Castling: involves picking up the king, then moving the rook on the B or G files forward one square (without capturing), then castling as usual. As you would expect both rooks involved must not have moved during the game. Luft Castling is available in addition to normal castling; and instead of, or in addition to Two Rooks Castling. When Luft Castling on the queen side, the B file rook must perform the Luft Manoeuvre - it cannot stay where it is, even though it is not technically an obstruction. Apart from the Luft Manoeuvre, Luft Castling is essentially the same as normal castling, and all of the usual castling restrictions apply, e.g. no Luft Castling through or out of check, etc.

In addition to the usual castling restrictions, Luft Castling has a further restriction: this being that Luft Castling is not allowed when the target landing square of the king is attacked by the opposing side. This applies regardless of whether the kings landing square is occupied by a rook (for king side Luft Castling) or is empty (for queen side Luft Castling). The idea behind this restriction is that the king cannot transition through check while Luft Castling, even though it could be interpreted that the rook performing the Luft Manoeuvre would in some situations block the check to the king on its landing square. Interpreting this situation may seem arbitrary, however I feel that disallowing Luft Castling under these circumstances is in keeping with an apparent principle of castling; being that castling should not invalidate the opposing pieces lines of attack to the king that is transitioning via castling. (rule-set updated: 2015-09-17)