This page is written by the game's inventor, Glenn Nicholls.

The game of LancerChess (one word) is a basic variant of Western chess and the object of this game is to provide a few simple changes to the standard game of Western chess such that provide additional scope and some new and interesting complexities to the game whilst retaining the overall feel of the standard game. Of note is the increased individuality of the minor pieces and particularly that of the movement of Queens’ Lancers on opposite coloured diagonals giving an initial advantage for each side on one set of diagonals – advanced players may find this feature of interest.  Also included is the Game variation of Clash and a beginner's Tour puzzle.

The background of the game of LancerChess can be ignored by those who wish to play the game in the traditional way of Western chess whereby there is no background or settings etc. For those who would know what little background there is though, there is only the following: There are very brief details only of this battle that are known – it is known that the battle takes place in the Disputed Realm and that this is the now re-named Fractured Realm (see Touchstone in the page Stepping Stones of Chess ) at a time of probably several centuries after Touchstone, though this is still Long Long Long ago. Reasons and causes for the battle are not known and little else of these mysterious times in this Realm is known either.

The object of the Battle (game) is to Checkmate the opposing Queen and this wins the battle. 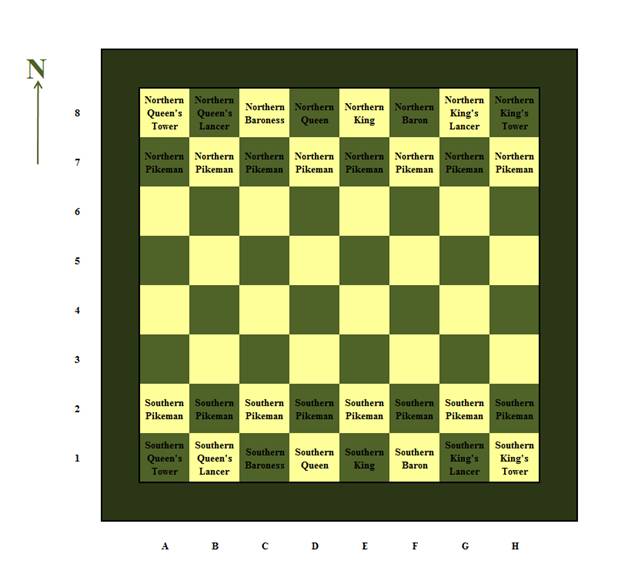 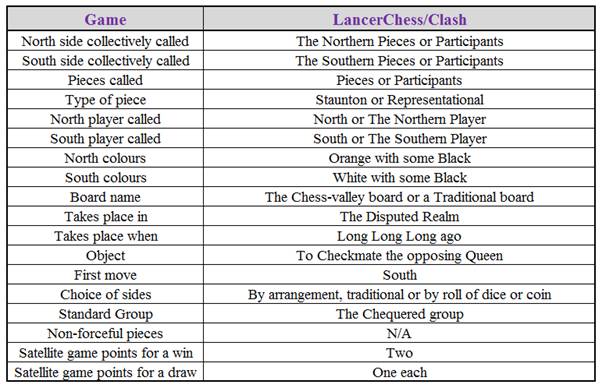 Note that the above colours can be varied e.g. Dark orange and Cream white.

Initial deployment of the pieces is as shown on the board and together with their names and their moves as per Western chess comparisons (mostly) are as follows:

The roles and powers and vulnerabilities of the King and Queen and therefore Castling (called Protecting or Safeguarding the Queen) are reversed from Western chess as they are in Touchstone and others of my games.

The Knights on G1 & G8 are replaced with Kings' Lancers. These can move to any square either one or two squares away in a vertical or horizontal direction and can jump over any intervening piece if moving two squares. They can capture on any of these squares. For example, if a King's Lancer were situated on E4, he could move to or capture on E5, E6, E3, E2, C4, D4, F4 and G4. He must capture on the square he moves to and not any square he moves over when moving two squares.

A King – he is identical to the Queen

A Queen – she is identical to the King

A Baron – he is identical to a Bishop

A Baroness – she is identical to a Bishop

A Pikeman – he is identical to a Pawn except for minor promotion changes that are:

Once a Tower has been or can no longer be used to Protect the Queen it becomes a King's or Queen's Siege-tower to reflect its greater freedom to attack and fittings should be added to the piece to show this - it is no different in effect from a Rook of Western chess though.

It can be seen that at the commencing position the Queens’ Lancers guard the equivalent of the weakly protected (in Western chess) Kings’ Bishop two squares.

And also with the Queen's Lancer players who are ambitious to win as north may find it a key piece for the reason mentioned in the introduction.

Also of note is that the King’s Lancer can force Checkmate with only his Queen’s help against a lone Queen within a reasonable number of moves and he attacks more squares than does the Western chess Knight on most of the board (48 of 64 squares) and he may give advantages when Protecting the Queen whereas "Long Castling" in Western chess is not considered preferable in most situations.

Of further note is that as well as the usual opening line transpositions there are also (part) game transpositions here where LancerChess can transpose to Western chess if all the Lancers are captured (discounting the slight differences in promotion choices). Transpositions from Clash of this sort are also possible - see next; also others  - e.g. Capablanca chess and my variations of this - see the page Storm.

Western chess is often called International chess and this reflects the status this game has been accorded.

Individual pieces are usually referred to by Northern or Southern but Orange or White is allowed.

The board as shown is the Chess-valley board.

Note: the advantage of LancerChess over Western chess is, I think, that the King's Lancer is a stronger piece in all phases of the game than the Western chess Knight - see notes to LancerChess above, though not greatly so and this may be somewhat counter-balanced by the Queen's Lancer being "colour bound",  but on balance the Lancers seem to have a small advantage over the Knights.

This is a basic tour puzzle suitable for beginners played on a 3x3 board where the King’s Lancer of LancerChess commences from square A1 and he must land on every square of the board once and finish back on square A1. An example follows:

Prior to commencing the Tour the King’s Lancer on A1 faces north-east, whereas when finishing the Tour he faces either south (as in the example above) or west depending on his last move.