This variant came to me when considering whether a 7 by 7 board could be reduced to 45 squares in any other, but equally elegant, way than removing the four corner squares. It occurred to me that removing four squares from the same corner would make for a lopsided game - unless the symmetry between the two sides were changed to a diagonal one. Well here is what I came up with as a result. As I had to choose what to do with the resulting concavity I kept to the "one foot in the grave" rule so characteristic of my concave-board variants. That apart, it has little stamp of myself, sticking to those "timeless" pieces common to most of the standard forms of Chess.

This is of course intended as an entry in the 45-46 cells contest. It came to me rather suddenly, hence my haste posting it. I gave the board an orientation allowing a name with a simple literary allusion - to the novel The L Shaped Room, by Lynne Reid Banks, and its various dramatisations. 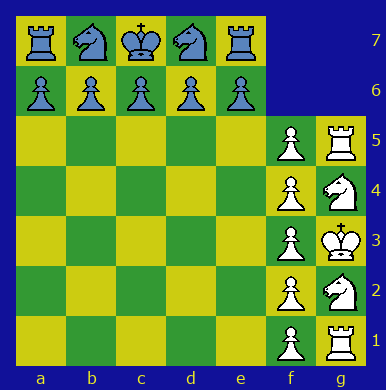 The pieces are the same four kinds of Chaturanga piece that have spread both northwest to Europe and southeast to Burma and Thailand. The only clarification required is that forward for Pawns is away from their own camp. This allows non-mutual threats between Pawns, such as occur between neighbouring players in certain 4-player variants. Indeed it could be thought of as a 65-square 4-player variant with two players and their camps entirely removed.

As there is no "Queen's side", pieces starting on either side of the King can be distinguished by the labels concave (those nearer the concavity) and convex (those further from it).

No piece may move from one camp to another in a single move. This means that the concave Rooks' Pawns cannot immediately capture each other (of course if either moves two steps forward the other can then capture it). One of my reasons for excluding pieces with a Bishop move was to express this rule simply.

Pawns have an optional initial double-step move. If they make this move, they can be immediately captured En Passant by other Pawns as if they had made only the single move.

There is no Castling, Kings and Rooks being too close together.

Pawns ending a move unable to move any further must be promoted to Knight or Rook. The promotion zone generally being emptier than in 8x8 variants should make promotion easier and so compensate for the small army size and lack of Queens.