This page is written by the game's inventor, Jose Carrillo. This game is a favorite of its inventor. 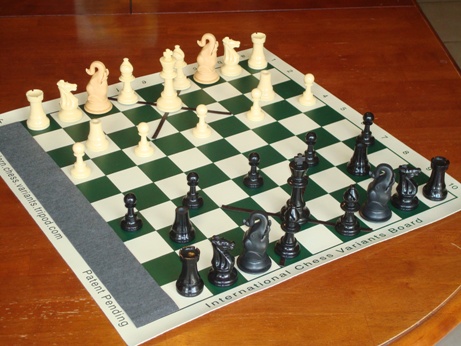 My 'Western' rendition of a Changgi board (above) and my Traditional Korean Chess set (below). 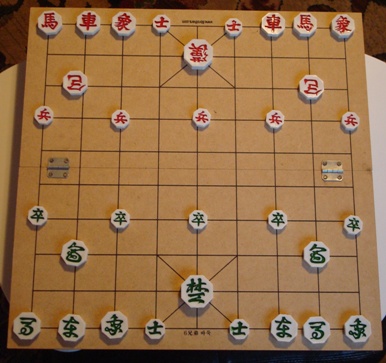 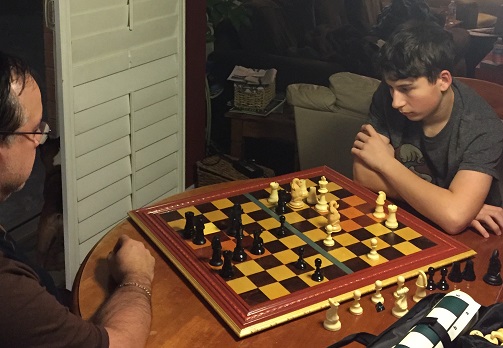 My son Joseph and I playing KRC on my homemade Xiangqi Cambaluc board. (Dec 28, 2017)

Korean Chess has the following features which I consider enhancements: Between the Knight-Elephant switch innovation above and after finding out that in North Korea the initial positions of Rooks and Elephants was actually interchanged (diagram below), an idea of a more formal random Korean setup started brewing in my mind... 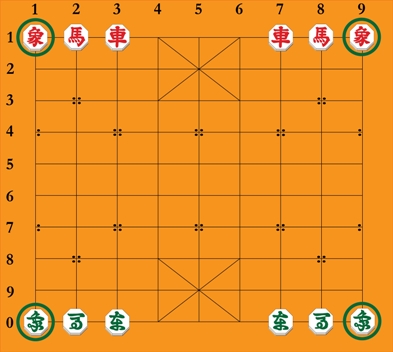 Initial setup for Rook and Elephants for North Korean Chess


... along with a couple of rule changes of my own, to complete my westernized random Korean Chess variation.

The Pope in Rome has Swiss Guards; in Korean Random Chess (KRC), Kings are protected by powerful Samurai Guards inside their palaces, and also outside!

KRC introduces Guards that can exit outside of their King's Palace and the Banzai tactic to the world of Oriental based chess variants.

In addition to the Japanese Samurai and "Banzai" tactic, KRC also features Pawns that promote to any friendly piece (including Samurai Guards ) that has been captured, and for which they must be exchanged, upon reaching the 10th rank. This new rule was adopted in 2016.

In my 'Western' rendition of a Changgi board above, for the Palace I'm using vynil strips (cut from a placemat just placed [not glued] on the board), Seirawan Elephants for the Elephants, Orthodox Bishops as the Samurai Guards, and homemade Cannons. 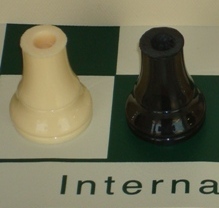 For the Cannons I used drilled beheaded Rooks (I used the Rook tops to glue on Knights to make Chancellors). 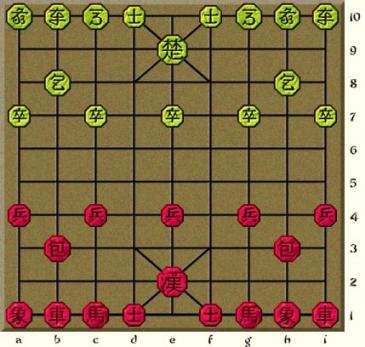 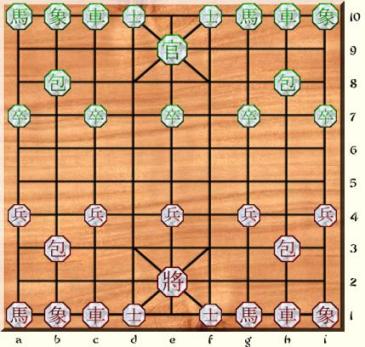 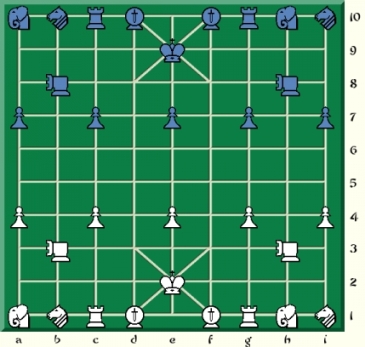 The initial position in the first row for the Rooks, Elephants and Knights is totally random, with the only restriction that you have one piece of each type at both sides of the King. There is direct symmetry accross the board for both armies.

There are 36 possible random setups in Korean Random Chess.

The initial position for the King, Samurai Guards, Pawns and Cannons is the same as in Korean Chess.

Korean Random Chess can be played with a variety of character sets and boards.

Here are two Chinese Chess board setups, one with Chinese Characters and one with Western Chess pieces on a Cambaluc board: 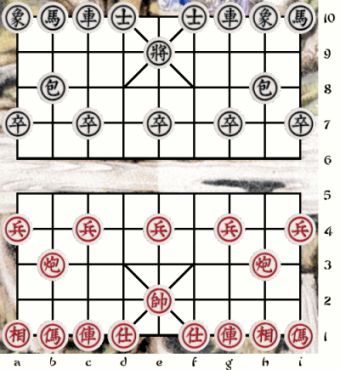 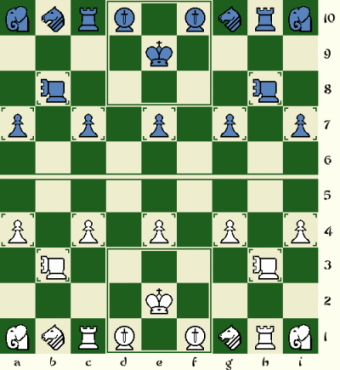 Remember that when using Chinese boards, the River must be ignored.

The Rook moves exactly the same as in Orthodox Chess. It moves in a straight line horizontally or vertically across any number of empty spaces, stopping either on an empty space or the first space it comes to that is occupied by one of the opponent's pieces. It may not pass over occupied spaces.

The Knight first moves one space orthogonally followed by one more space diagonally outward. When the first space it would move over is occupied, its movement in that direction is blocked.

The Elephant is like a giant Horse. It moves 3 positions away from itself: first by going one step horizontally or vertically and then TWO outward diagonal steps and there must be clear passage.

Just like in Korean Chess, Cannons must jump a piece in order to move; but Cannons can not jump over Cannons, nor can they capture enemy Cannons. Therefore (unlike in Chinese Chess), a double Cannon lineup against a King poses no immediate threat, as the rear Cannon can't jump over the front Cannon.

Pawns move the same way they capture: they can move either one step forward or one step sideways. They can never move backward. If a Pawn makes it to the last row, it must promote and be exchanged by a friendly piece (including Samurai Guards) that has been previously captured. This new pawn promotion rule is inspired by a similar rule from the Changgi Association Tokyo Branch.

In the example above, the pawn at h10 promotes into a Rook.

The King in Korean Random Chess moves just like an Orthodox Chess King, one step in any direction orthogonally or diagonally, regardless of whether there is a line or not showing the path within the Palace, which is different than in Korean Chess. Kings can not move outside of their Palaces.

The two enemy Kings can NEVER face each other naked (without any pieces between them) on an open file at any time, just like in Chinese Chess.

Korean Random Chess features Samurai Guards, which also move just like an Orthodox Chess King, one step in any direction orthogonally or diagonally (like a Courier Chess Man or Commoner). But a novelty in Korean Random Chess is that the Samurai Guards DO have the ability of getting out of the Palace. Therefore these Guards can be used both defensively (within the Palace) or offensively (outside of the Castle).

The only catch is that when Samurai Guards are outside of the Palace, they must take (or kill) the enemy upon first contact (similar to how Checkers men are obliged to jump when possible and capture). Should a Samurai Guard be in contact with more than one enemy piece (i.e. fork), the player may choose which of the attacked pieces to capture.

When a Samurai Guard is in a position where he must capture an opponent piece, the Guard is said to be in banzai.

In the opening and early in the middlegame (when there are still lots of pieces on the board), players should keep their Samurai Guards in defensive outposts inside or close to the Palace, as offensive Samurai Guards in banzai must capture even if the capture will cause the suicide of the Guard or will weaken his army's own defense.

Samurai Guards prove to be very powerful and efficient killers later on in the middlegame and endgame, when there are not too many pieces left on the board. A Guard and his King will easily be able to checkmate an opponent lonely King.

Similar to calling 'check', calling 'banzai' to remind an opponent he is in a must take situation is optional. But should a player in banzai miss the situation and attempt to move without capturing with the Samurai Guard, or move a different piece altogether, then his opponent must call banzai as a reminder to the first player that he must take with his Guard.

The only exception to the Samurai Guard's banzai rule is when the Guard's capture might otherwise either: In this case the player is able to play any move, with any piece, to protect the King. A player's FIRST obligation is to protect his/her King from check. However the player is still allowed to move the Guard, as long as the move either: It is possible for two friendly Samurai Guards to be in banzai at the same time. In this case the player chooses which Guard to execute the banzai attack with. If the other Guard is still in banzai in the next turn, then he will have to do a forced capture as well on that turn.

It is possible for Samurai Guards to be in banzai for consecutive turns, which could prove deadly to the Guard early in the game.

Players need to be well aware of the banzai tactic as the obligation to capture can be unfavorable to Samurai Guards outside their Palace. In some positions they may be forced by the enemy to capture to their disadvantage. Because of this risk, players should keep their Samurai Guards close to the Palace early in the game to avoid being forced into a banzai charge that may weaken their game.

Below we ilustrate some Samurai Guard attack examples: 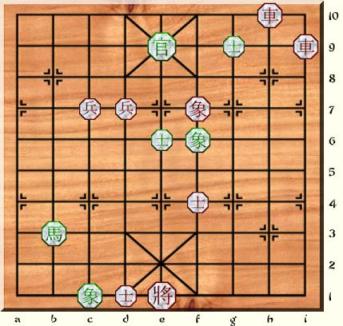 Green's Guard threatens to take the Red Elephant at c7, but since the Green King is in check, Green is obliged to get out of check first.

Green actually played 27... Re9. Red played 28.Ef5 to protect his Elephant from the Guard and threaten the Green i3-Rook. 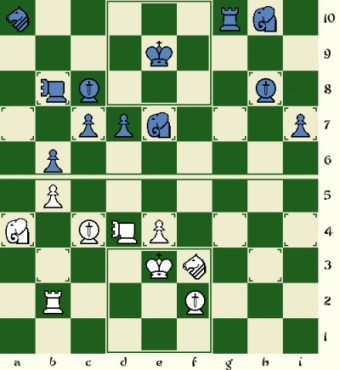 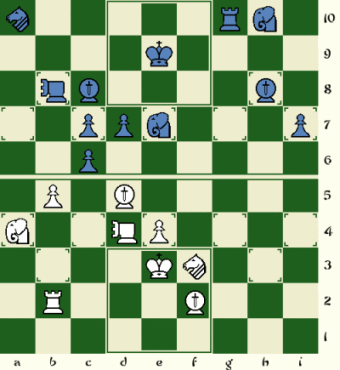 Actually, Black sets up a trap! Black intends to play 25... bxb5 placing the Samurai Guard in banzai, forcing him to retake the b-Pawn, leaving the White Rook exposed to the Black Cannon's attack.

White's Samurai Guard avoids the 1st trap, but falls for a 2nd trap. The b-Pawn move places the d-Guard in banzai and creates a discovered attack for the Black Cannon on the White Rook.

This position shows the risk of having Guards wondering outside of the Palace when there is still too many pieces on the board, as Guards may be forced to capture to their disadvantage.

The goal of the game is to checkmate or stalemate the opponent's King. Stalemate is a loss for the side unable to move.

Just like in Chinese Chess, the two Kings can NEVER face each other naked (without any pieces between them) on an open file at any time.

Draws are discouraged. Most games in Korean Random Chess end in a win for one side.

A player whose turn it is to move who has no move that does not worsen his/her position is in zugzwang, and he/she must play. Players are not allowed to pass in Korean Random Chess.

When a player is unable to legally move, but is not in check, the position is a stalemate and he/she loses the game.

Games are only drawn by mutual agreement when neither side feels they can force a checkmate, after 50-consecutive-moves without a capture or a forward Pawn-move (sideways Pawn-moves do not reset the 50-move count), or by insufficient material.

The only insufficient material situations that are automatic draws are lone King vs lone King, and lone King vs King & Cannons(1 or 2).

White currently has a slight advantage and a more solid position. Should the Black Rook (the aggressor) have continued to chase the White Elephant (the victim) back and forth between a1 and c4, after: 29. ... Rc5 30.Eca1 Ra5?? 31.Eac4(3); White would have won the game by the KRC Threefold Repetition rule.

Black played 29. ... Ege7 instead, to break the repetitive sequence and avoid a 3rd repetition of the postion above.

A King and any one piece (except a Cannon) are sufficient material to defeat a bare King (in the diagrams above imagine the position with the Kings with any one of the Red pieces on the board). 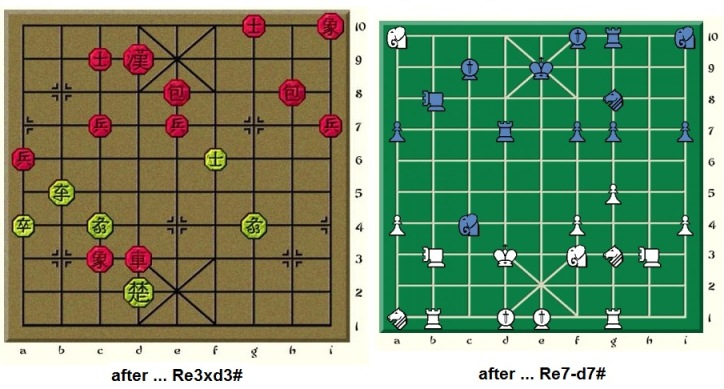 A very powerful, often mortal attack! It's really a double check by Rook and Cannon, where the Cannon is backed up by the King (or another Rook).

After the removal of the Cannon, when the Rook is then supported by the King (or another Rook), Triple Checks often prove to be very lethal!

Left diagram after 9. ... Rd7-e7+++, a double check with the extra support from the King; diagram on right, two moves later after 10.Kd3 Ce8-e1!! (the Cannon has a fork on both White Rooks) 11.Gfxe1 Rd7# checkmate! Look at the important role of the Black King in the final position, on the original file of the triple check. 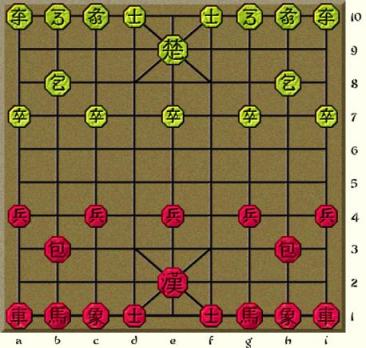 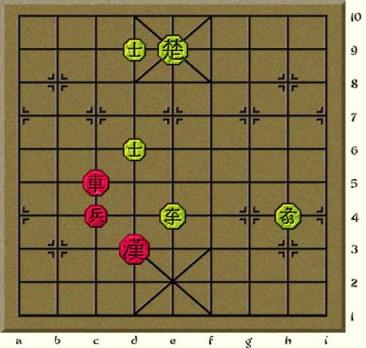 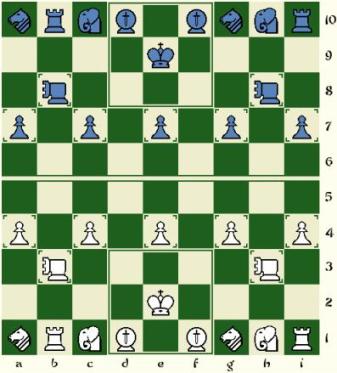 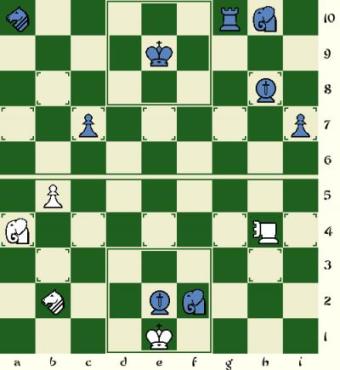 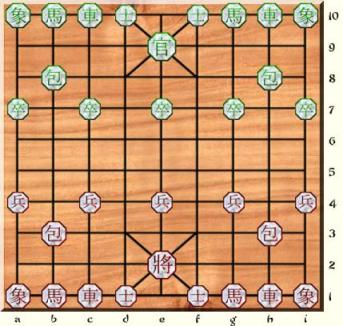 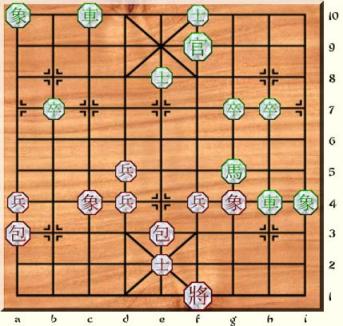 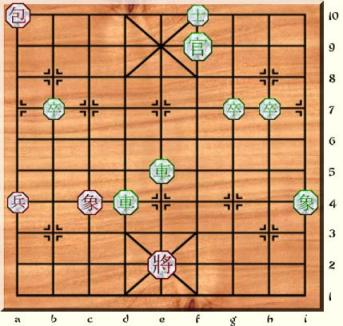 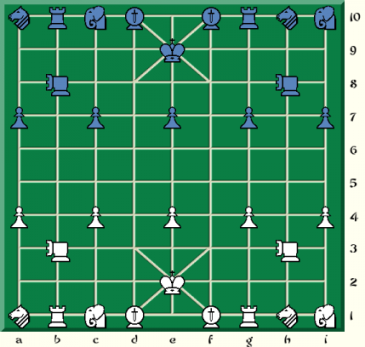 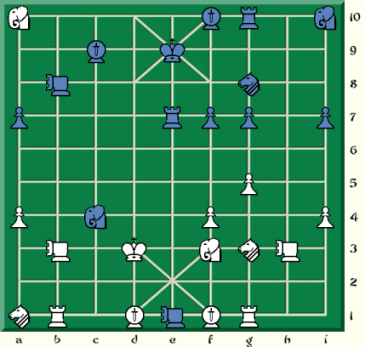 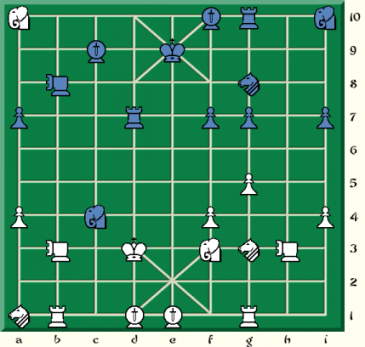 Remember that at the start of the game the Rook, Knights and Elephants will be shuffled and placed randomly.

Oriental Character Presets:
Preset 1 (The labels on the green pieces are all written in the Semi-cursive script)
Preset 2 (The labels for Rooks, Knights, Elephants and Cannons for both armies use the same set of Traditional characters)
Preset 3 (Chinese Chess characters)