This playful variant introduces an important novel concept, "the King's entourage" which should open up whole new vistas for chess variant design.

It was inspired by a chess piece, the ridiculously strong Ubi-Ubi, one of the most powerful chess pieces invented, being able to make arbitrarily many knight moves, an "everywhere" piece.

The initial pawn setup is designed to protect the king from the Ubi-Ubis and the Ubi-Ubis from getting exchanged immediately with one another. 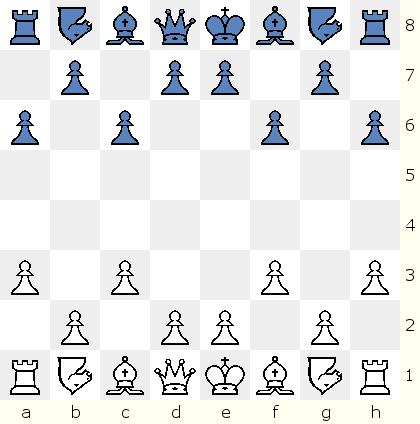 In this variant, it is highly advisable for the King to move around a lot!

In fact, in this variant, finding ways to move the King can be more important than devising ways to capture pieces.

When ever the King moves, any empty spaces one knight's distance get to be filled in, with rooks on the rearmost, knights on the forwardmost, pawns on the narrow forward and bishops on the narrow backward, as follows: 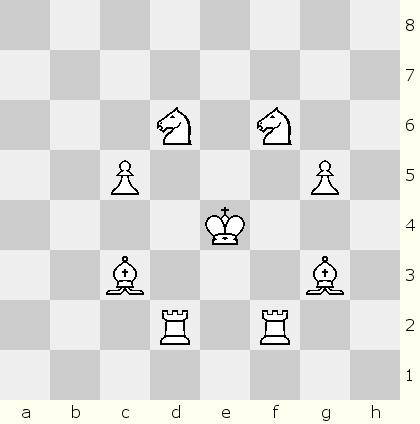 These can be considered the King's bodyguards!

Pawns can promote to Ubi-Ubis or to kings but not to any other pieces in this game. Promoted kings function just like other kings, with their same entourages. To win, all kings must be checkmated or captured. Extra kings can be captured, but a solo king can not be captured and must be checkmated.

The goal of this game is still to checkmate the king.

Otherwise, White's opening move advantage may make him too powerful.

In some ways, the Ubi-Ubi can be even more powerful than a Ubi-queen that can make arbitrarily many queen moves because of the Ubi-Ubi's power to jump over obstacles. Not so in Ibu Ibu Chess. Because of the King's entourage, constantly throwing up barriers, barriers that wouldn't be barriers to a Ubi-Queen. A Ubi-Queen could be thought of as a space-filling device, a Plasma Queen.

Fortunately, there is no Ubi-Queen in Ibu-Ibu Chess or any other variant I'm aware of!

A variant with a Ubi-Queen could be devised too, but the King would have to be given an entourage on all of his immediate surrounding sides, all eight of them. Such a king would be trapped behind his entourage. To avoid this, the king could be allowed to capture his own pieces, hence move and create new entourages as in Ibu Ibu Chess, and/or a member of the entourage could be allowed to move while depositing a piece in the square just left so that the king's entourage is never left with gaps in it.

In Ibu Ibu Chess, the King can not eat his own pieces (though in many cases it would be useful to do so) and he benefits from no such depositing on the part of his entourage. When a member of the King's entourage leaves in Ibu Ibu Chess, nothing is left behind but the space left (unlike all the pieces in wormhole chess), as with most chess pieces. They take themselves and all their "possessions" with them every time they move).

In Ibu Ibu Chess, the King creates a new entourage everywhere he goes. New members of the king's entourage appear magically out of nowhere and the old entourage is left behind. An alternative which could also apply to the Ubiqueen variant would be for the King to take the same entourage with him everywhere. Such a king would be like a snail, turtle or crab in taking his "home" with him, his shallow shell.

You could turn the Ubi Ubi into an even more powerful piece by making it a multiple displacer in which case, the Ubi-Ubi becomes a mass destructive piece, capturing all of the opponent's pieces on the first move or turning them all into pieces of the same color (depending which rule of multiple displacement is being used).

This concept (of a more powerful Ubi-Ubi) is sure to give me nightmares!

The only way to protect oneself from these multiple displacing Ubi Ubis would be to limit their movement to a single board and start opposing pieces on a different board in a 3-D chess game. Or simply specify that certain pieces as immune to such mayhem caused by MDUUs (Multiple Displacing Ubi Ubis, or, if you like, Mass Destructive Ubi Ubis)

Special thanks are due to Eric Greenwood for playtesting Ibu Ibu Chess with me. His advice helped me improve the design of the initial structure and led to further exploration of the potential of Ubi Ubis and opposing King entourages.