This page is written by the game's inventor, Yu Ren Dong. 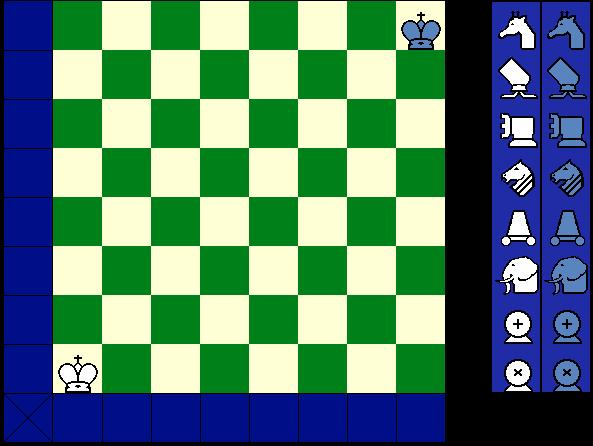 The zone consisting 16 blue squares outside the 8*8 board is named Hunt Trophy Zone. White King: a1 Black King: h8

Horse: Stones may move like a Knight in Chess, except that they can't jump over other pieces.

Pao: Stones may hop orthogonally any number of squares.

Vao: Stones may hop diagonally any number of squares.

Giraffe: Stones may move one square diagonally then 3 or more straight.

1. Players alternate making one of their own pieces a move.

2. Any opposing piece is captured by displacement. Stone only can capture Opponent's King. King behind a friendly Stone, after capturing an Opponent's Stone.

3. A piece cannot move to a square occupied by a friendly piece or move into Hunt Trophy Zone.

4. On any turn, instead of moving a piece on the board, a player may drop

one of his eight Stones on any empty square of 8*8 board.

5. On any turn, instead of moving a piece on the board, a player may drop one of his eight Hunt Trophies on any empty square of Hunt Trophy Zone. After dropped, trophies are not movable.

6. Players would move their own stones as any-owner Hunt Trophies whichever are standing on the same file or the rank.

7. The object of the game is to checkmate Opponent's King.

This chess variant is my first variant.