Early in 2009 I read that the nursery rhyme Humpty Dumpty originally referred to a cannon used against the siege of Colchester. Its transformation to the strange character who, accordingly to Lewis Carroll's Alice, looked "exactly like an egg" I discuss in Notes. Anyhow, it struck me that this chain of events connected an object represented by a Xiang Qi piece, in a town associated with Latrunculi, with a character in a Looking-Glass World having a strong element of FIDE Chess. Being the person that I am, I wondered in spare moments how elements of all three games might be brought together in a themed game.

First I decided that the game should use the Colchester Latrunculi board of 12 files by 8 ranks - coincidentally the same dimensions used in Courier should you wish to see such a board in use - and use FIDE pieces and Cannons. With this combination it seemed sensible to add Yang Qi's Arrow in. The start of Humpty's name, combined with one of Lewis Carroll's own verse works mentioning "a camel with a hump", and Colchester's ancient name of Camulodunum, suggested that Camels too suited this game. This mix of pieces recalls my Wildeurasian (WEA) Qi, but I could not connect the Gnu with any aspect of the theme and there were certainly no tanks in the siege! I therefore decided to exclude compounds of duals - even a Queen - from the array, but introduce them later by promotion. Where the array might otherwise have had them I put the Frog which I use in CoBlaChe, a Double Cross Besiege subvariant also set in the East Essex lowlands - and which is also a recurring motif of Lewis Carroll's works.

It seemed to me that a variant set in Europe shouldn't be too like Xiang Qi. I chose a front rank of Pawns, but with XQ-like gaps mainly to keep representation simple. I followed the WEA Qi pattern of two FIDE sets - one representing themselves and the other with Knights as Camels, King as Gnu, and linepieces in Hopping-capture form. The second set's Pawns would represent Frogs. The Essex river Colne (the Co of CoBlaChe) played a major part in the siege but neither of my Anglis Qi River rules suited this variant. The Bishop's run-up was specific to that variant, whose name has echoes of a neighbouring and rival region, so Essex locals might resent the connection. Early Pawn promotion is also used in offshoots, but the array already has pieces represented by the second set's Pawns. Eventually I decided to make the River a restriction on that latter piece, reflecting how bridges were guarded in the siege. 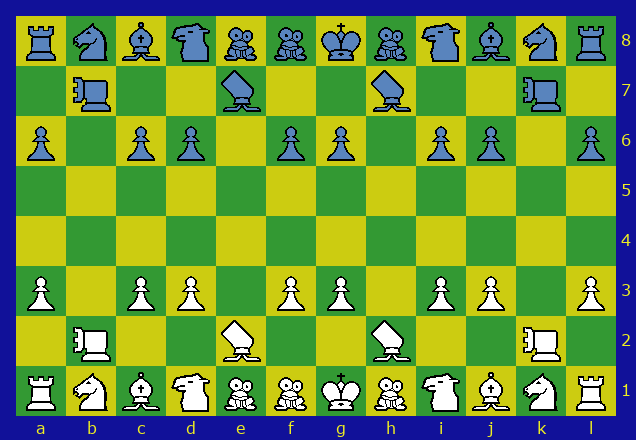 There is no initial double-step move or En Passant as Pawns start on the third of eight ranks. Castling is as in FIDE Chess, except that each piece moves one step further. It is not as useful with Pawn gaps and no Queen, but it is there just in case it ever is needed.

The boundary between the fourth and fifth ranks is a River that Frogs can cross only if there is no intervening piece of either army.

Although it is easy for either player to deliver Check on their first move with an Arrow capturing a Camel's Pawn, the Checked player can respond by moving their own intervening Arrow to capture a Camel's Pawn. The Checking player will not be able to repeat the Check or capture a further piece. It will be difficult to withdraw the Arrow back to its own camp. Capturing the Rook's Pawn is not advised either, but if your opponent tries it the best response is to capture the Arrow with the Knight (removing the Cannon threat to it) rather than the Rook (removing the Rook's protection of the Knight).

I ruled out Pawn promotion to simple pieces as it would be a complication to also allowing Frogs to be promoted, and I didn't feel like laying the variant open to debating the relative strength of the colourbound Bishop, colourswitching Knight, and Frog which is neither!

The rhyme Humpty Dumpty describes how the cannon so named met its demise in the siege. No doubt illustrations would have depicted the cannon in a more animate form with an open-mouthed face - like the "barking dog" cannons in Terry Pratchett's Interesting Times. The next stage must have been a loss of perspective, taking out the depth of the fortifying wall and length of the cannon. So the sense of "wall" as fortification and Humpty as cannon became forgotten, reducing the character to a spheroidal monster perched precariously on a narrow garden wall.