This variant arose from ideas of maximising the directions in which Castling and Cathedsralling was available. The arrangement of a square back rank of even side was never ideal as its effect was to put the royally-restricted piece off-centre and so ill-positioned for Cathedralling with pieces at the ends of the back-rank diagonal not going through its cell. Conversely, a square back rank of odd side would mean having the Bishops, if Bishops they were, all on the same binding.

Two options that I considered for a cubic board were to have only compound pieces - Chatelaines at the corners of the middle level, Vicereines at those of the middle filestack, Primates at the top corners of the entire cube, and Moderators at the bottom ones - and only divergent pieces - Stewardesses, Waitresses, Contrastewardesses, and Valets in the same positions. In the latter case the moves for Castling and Cathdralling would be the noncapturing ones. These two options might yet see the light of day as Crowned 3d Chess and Churlish Chess.

The idea leading to this variant, however, was to use a hex-prism board, on which Bishops themselves are unbound. As the Unicorn is very severely bound on this geometry it turns out to be an especially good 3d geometry for armies of purely 2d pieces, as described in the Honeycomb Chess page. What I was however less happy with was using progressively larger ranks than the 7x7 end ranks that were the minimum requirement for Castling and Cathedralling on eight sides. However, the Hourglass Hex Chess principle of ranks progressively decreasing in size from the ends could also be applied in 3d, and that was what I decided to do to effectively give a board of two overlapping triangiular prisma, of side 7 throughout. It is the combination of the principles of the two variants that gives this variant its name.

Honeycomb Chess itself is hex-ranked and so the same pieces can and cannot move within a rank as on square-cell boards, but Hourglass Honeycomb is hex-level and so transfers this distinction to levels. To restore pieces that cannot move within a rank I chose to fill out the spaces between the symmetric pieces with their rankers - versions of them restricted to moving more ranks than files. The Mitregi-based subvariants also use forward-only pieces.

Since the introduction of an economic way to display a wider range of piece images in arrays I have been emboldened to add a subvariant featuring Crooked pieces, and upgrade the thoughts of.Mitregi-based gamse into full subvariants. 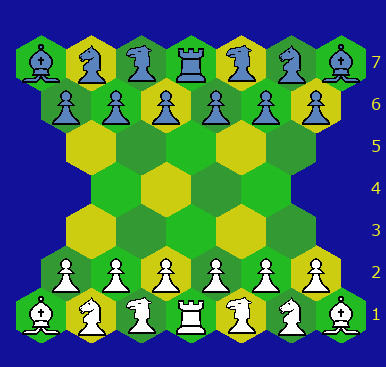 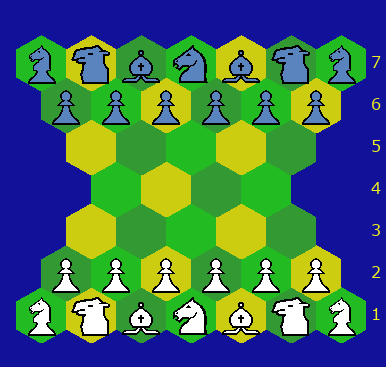 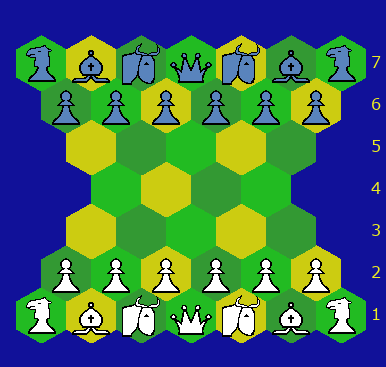 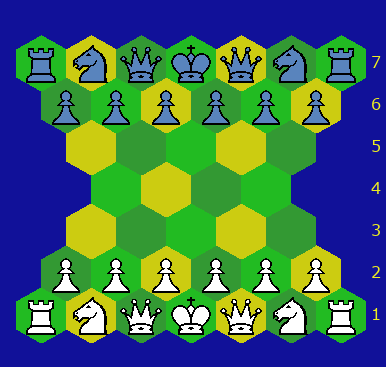 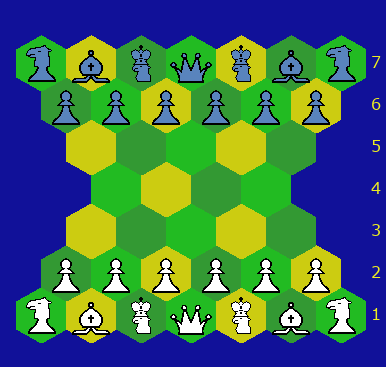 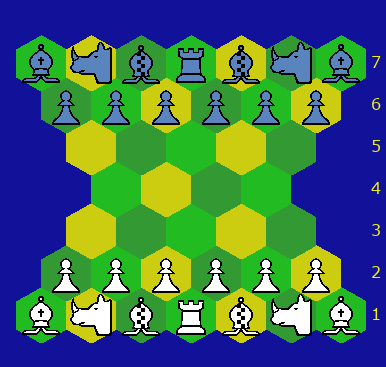 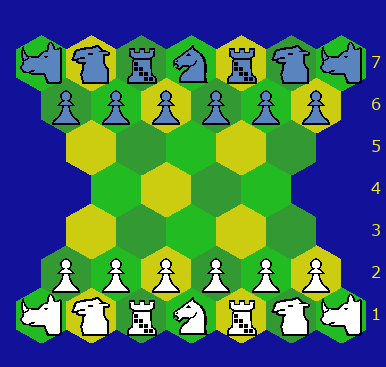 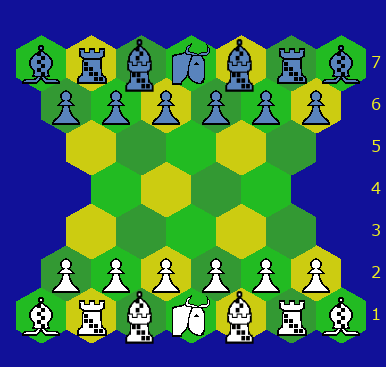 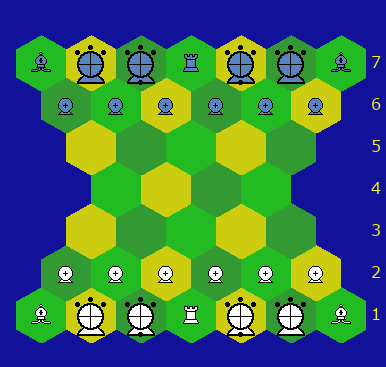 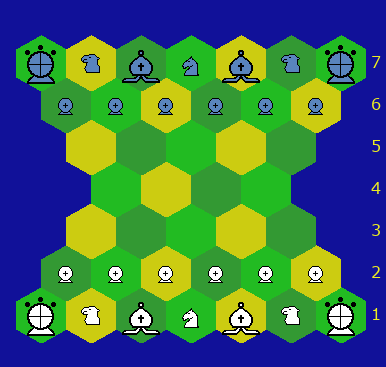 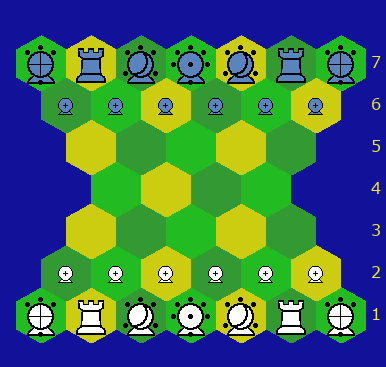 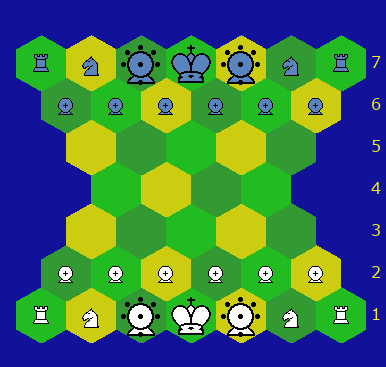 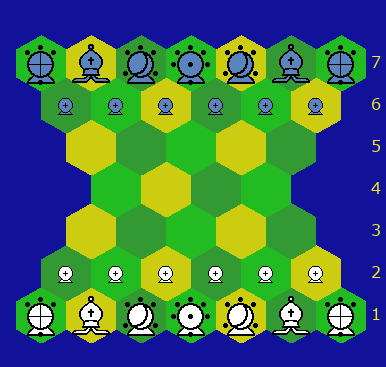 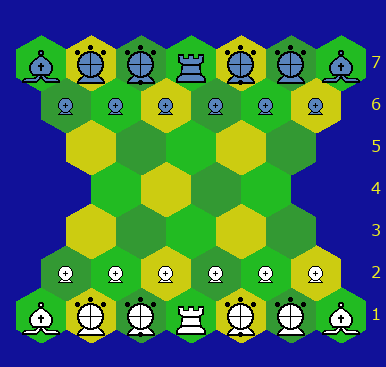 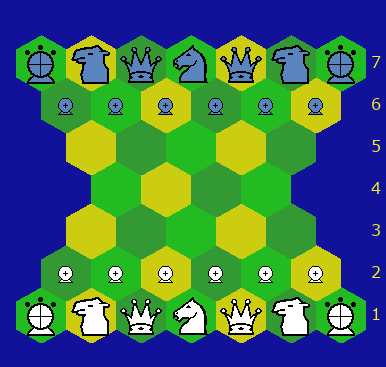 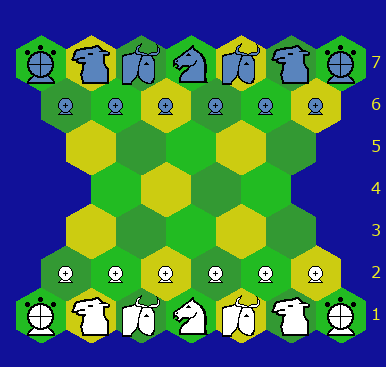 The KING moves one step along any of the 8 orthogonals and 12 root-2 diagonals. It is unpromotable and must be kept out of Check.

Most straight pieces have a ranker and a forward-only form. The linepieces also have Crooked versions. Pieces in italics are not used in these variants but are included in the table for completeness' sake. All other pieces in this table are unpromotable unless otherwise specified.

The PAWN moves one step along either forward orthogonal except when capturing, which it does one step along any of the 4 forward root-2 diagonals. It is promotable to any other capturable array piece, although promotion to anything but Queen or Gnu is an underpromotion.

The POINT moves one step along either forward orthogonal. It is promotable to Goldgeneral.

There is no double-step initial Pawn move, and therefore no En Passant, as the Pawns are one rank less apart than in FIDE Chess.

In the first two variants the King can Castle with any Rook or Cathedral with any Bishop, with both pieces moving exactly two steps. Restrictions are the standard FIDE Castling ones: both intermediate cells must be empty, they and the King cell must not be threatened by an enemy piece, and both pieces must be previously unmoved.

In the first two variants a Pawn reaching the far rank must be promoted.

In the last two variants promotable pieces may be promoted on any move entering, within,k or leaving the two ranks of the enemy camp. If a piece has no further move unpromoted, promotion is compulsory.

In the last two variants captured pieces can be reintroduced, unpromoted, in the army ofthe capturing player. Humps cannot be reintroduced on their new player's second or fifth rank, as this would make them unpromotable.

Victory is by Checkmating the enemy King.

Wildokisaki is an idea that I recently had for a 2d variant adding a Gnu and Camels as well as a Queen and Knights to Shogi. This is my provisional array: 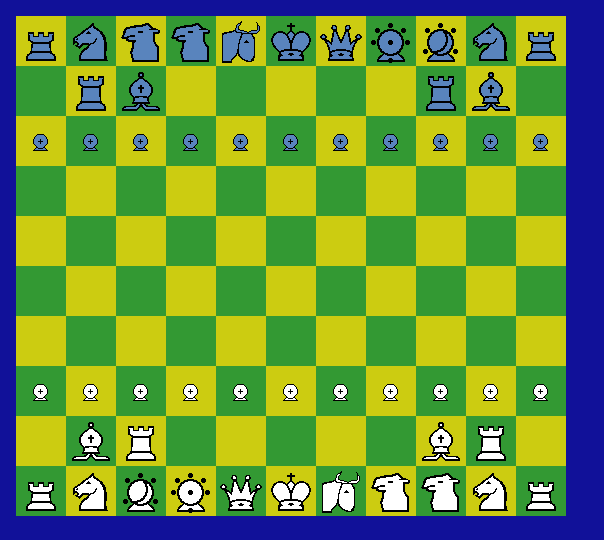 but this is contingent on suspecting that this is the array for the original Okisaki: 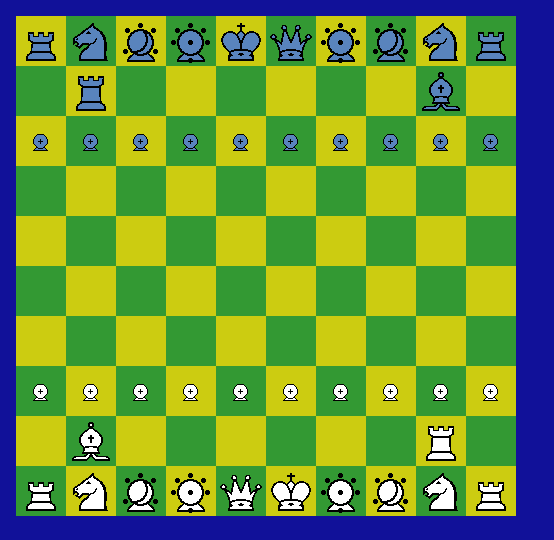 If anyone can confirm either way, and present the correct array if I am wrong, I will both be grateful and review my Wildokisaki array.