The step from Mitregi to Dai Mitregi was quite a big one, increasing part-symmetric pieces from two to three components and so expanding the number of types of these from 2 to eight - four Gold and four Silver.

Hoo Mitregi is a compromise, limiting components to two but mixing one- and two-step moves on the same piece. It could be seen to have that in common with Symgi, although that variant has different pieces again of six, all symmetric, types. In fact Hoo Mitregi uses the same four part-symmetrics as my large variant Nested Shogi. My piece article Man and Beast 11: Long-Nosed Generals explains their names. Mitregi's 2 diagonal/orthogonal combinations, Hoo Mitregi's 4, Symgi's 6, and Dai Mitregi's 8, in all cases excluding the King, make a rather good if fortuitous progression. As with Dai Mitregi there are leaping and stepping subvariants. The four types remain equally divided between Gold and Silver. As one Hoo Mitregi half-symmetric piece is unbound and the rest bound to halves of the board (not all to the same two halves) it is more appropriate to have one aside of that one and two aside of the rest than Mitregi's one Goldgeneral and two Silvergenerals aside.

The name comes from Hoo being the Japanese name for the Waffle, as two types of piece have subsets of its move. 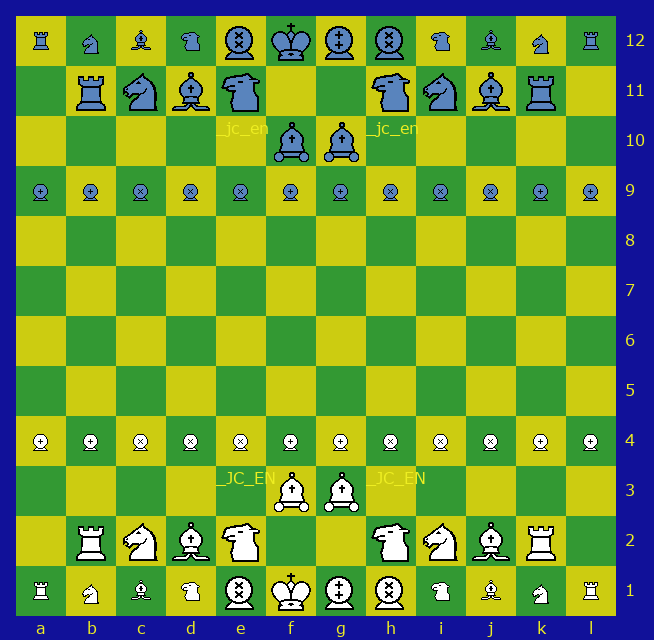 There is no initial double-step move, En Passant, or Castling, as Shogi has none of these.

The promotion zone comprises the four ranks of the enemy camp. Promotion is allowed at the end of a move starting or ending in the zone, and required if the piece has no further move unpromoted. Rooks are promoted to Chatelaine, Bishops to Primate, Knights and Camels to Gnu, and forward-only pieces to any kind of part-symmetric array piece. Part-symmetric pieces themselves are unpromotable, as are Kings.

Players keep pieces that they capture in a Reserve, whence they can reintroduce any except the Waffle and Fezbaba as their own pieces, unpromoted and able to move in that form. Each player may not have more than one unpromoted Point per file, nor more than six unpromoted Crosses per Bishop binding.