This variant combines a scaled-down Honeycomb Chess board with the ethos of 3d Minishogi. It uses the setup phase of a subvariant added to the latter just before this page was first posted, inspired by the even more diminished array of the original 2d Minishogi. The hex-prism nature of this game's board allows pieces to be far closer in nature to those of 2d Shogi/Minishogi than is the case in cubic variants.

This could potentially be an entry in a 50-cell contest, but given that we haven't even had the 48-cell contest yet I couldn't be bothered waiting.

As with other hex-ranked variants, I display each level as a square-cell board. Note that each file of the top three levels is directly above the boundary between two files on the level below. 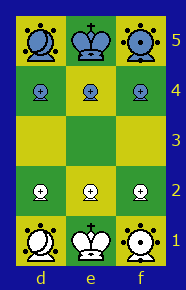 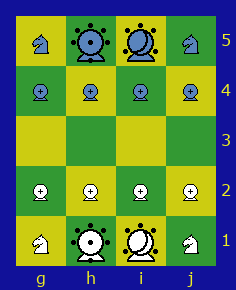 Pieces are the short-range Shogi ones. Side-effects worth noting are that:
1: The King has over twice its 2d moves.
2: The other generals' numbers of moves still differ by one, the "5 for Silver, 6 for Gold" rising to 13 and 14. Also preserved is the Gold's ability to triangulate (forward diagonal, sideways and backward orthogonals, in any order), and the Silver's inability (as it always moves one rank forward or backward) to lose the move at all. These features make Silver-to-Gold promotion still valid. Contrast 3d Minishogi, which promotes Silver and Gold alike by adding triaxial moves.
3: The Silver retains its inability to move within ranks, which are hex boards and so have no standard diagonal.

The game starts with a setup phase. Starting with Black, each player removes one of their Points from a file in which the other player also has a Point, until each file has just one player's Point on it. The Points removed in this phase drop out of the game and cannot be reintroduced. Because Points, unlike 3d Minishogi's Princelings, cannot change file unpromoted I make the setup phase compulsory.

The players then alternate moves, starting with White.

There is no initial double-step move, En Passant, or Castling, as Shogi has none of these.

Unlike in 3d Minishogi, promotion (always to Gold) is compulsory and happens only on the far rank. Kings and array Golds are not promoted. Captured pieces may be reintroduced in unpromoted form as in Shogi, on any rank except the promotion one.

This variant can be played with a standard Shogi set treating Rooks as extra Golds, Bishops as extra Silvers, and Wings (forward-only Rooks) as extra Helms. Black can set up their pieces with the first Point already removed and White then do likewise.