This page is written by the game's inventor, Stephen Howell.

Background – in the 80’s a good friend (Galth Ractus) and I decided to see if we could make Chess more challenging, yet still easy to remember. It is already a great game, but I really wanted to see if it could evolve to another level by taking more than one move a turn. So, after much playtesting we decided that upping the number of moves you can make each turn to two dramatically changed the game. (We did try 3 and 4 move variants, but they seemed fraught with issues and would require extensive changes to work.) After working out a few challenges to make sure the game was balanced and fair, we came up with what was dubbed Rune Chess, as I was running a BBS on my C64, dedicated to gaming, called Runestone BBS.

Over the years I have honed the rules and determined that playing Hit and Run Chess adds a whole new dimension to chess. I am not sure if it makes your chess game any better, but it sure makes you think at right angles.

If Chess represents a war, then Hit and Run Chess represents modern warfare. It moves quicker than standard chess while giving you the same challenging strategy and play, only at a new level.

Hit and Run Chess is played with a normal chess set with normal pieces, placement, and movement.

The big difference is the combination of pieces and moves you can make after the 1st turn.

It’s really simple, especially if you already know how to play chess.

This usually results in much longer games requiring more pieces to pin the king. Although the King is the piece this variant most affects, it may have some situational benefits across the board. 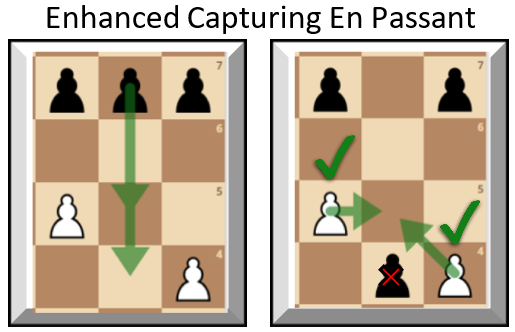