This variant followed a number relating to the common dimensions (9 by 9) of the Shogi board and the Sudoku grid, some playing on the subdivision of the latter as 3+3+3 by 3+3+3. The suffix -ku in this context brought to my mind the haiku, a Japanese minimalist poetic form in which two 5-syllable lines sandwich a 7-syllable one. Note that this has no conection to Aikou, the Chinese word for a mountain pass incorporated into my Pass Variants in June 2016. An example in English would be:
Shogi is a game
played on a nine-by-nine board
with eight types of piece.

This gave me the idea of a large Shogi variant (hardly unprecedented so far) on a 5+7+5 by 5+7+5 board. My way of emphasising the 7 central and 5 edge orthogonals in each dimension was to have a 4-player variant with camps measuring 7 files by 5 ranks (from the relevant player's perspective) along the middle of each edge. The standard Shogi camp of course measures 9 files, its full board width, but eliminating the Helm made sense to avoid it ending up unable to either move or be promoted.

The final stage was overcoming the sloth of Shogi's short-range pieces on so large a board. I considered using Ryu Shogi dragons, but rejected these because they would be too late as promotees only and too unlike standard Shogi as array pieces. Eventually I settled on an extreme version of the FIDE two-step initial move. It is because I view it that way that I retain one-step names, just as a FIDE Pawn and a Chaturanga Pawn are still both Pawns. 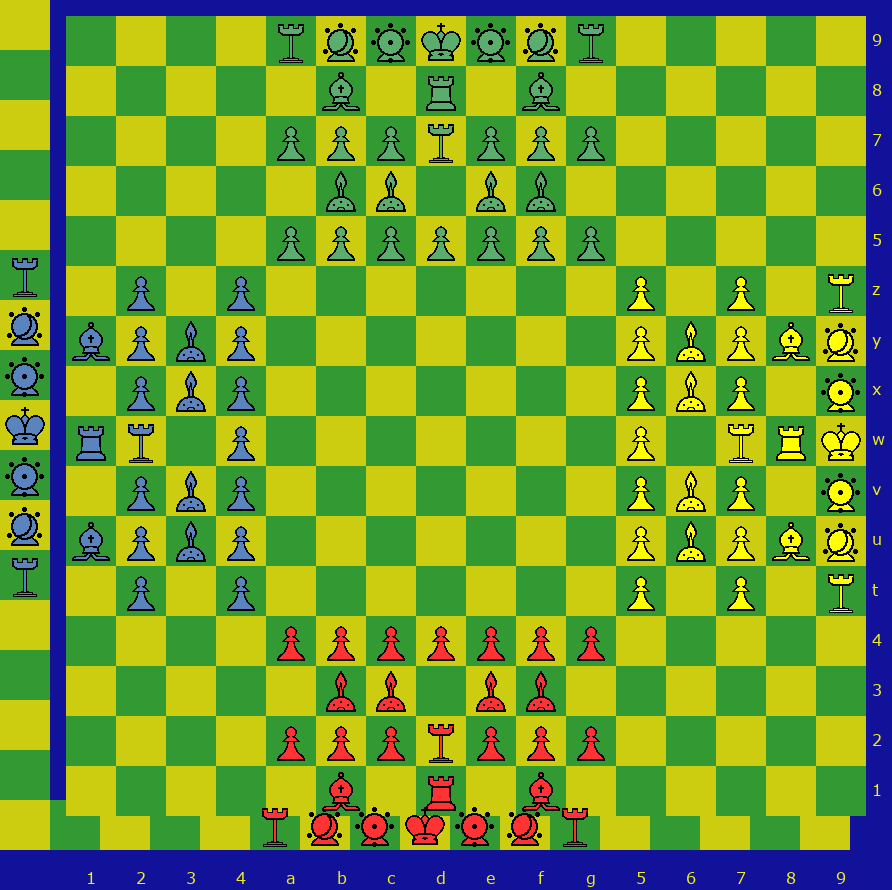 The 7x5 camps, 5x5 corners, and 7x7 central area are termed zones, and that part of an army in a zone is termed a contingent.

As there are no concavities there is no restriction on which diagonals can be used.

A long-range move is any distance through empty intermediate squares to an empty or enemy-occupied destination square.

A short-range moves is usually a single step, to an empty or enemy-occupied destination square. The following exceptions are however also allowed as long as the destination and any intermediate cells are empty (i.e. not capturing or leaping):
* two steps if starting or ending within its own camp (the analogue to FIDE's double step for Pawns leaving camp);
* two steps if starting and ending within a single zone where its contingent is strictly larger than any other (not joint largest) and it can make a future move in its current form;
* three steps if starting and ending within its own camp when its contingent is strictly larger than any other there (not joint largest).
Note that this does not cover any piece making a short-range move:
* between different zones where its contingent is in the majority, unless one of them is its own camp anyway;
* within a zone where the piece is in an equal largest contingent, except for two-step moves within its own camp;
* to capture an enemy piece.

A piece making a multiple-step short-range move may be captured En Passant (as if it had made a shorter move), but only by an enemy of the same piece type (in terms of its unpromoted move within its current army, rather than what it might become if it changed side) and promotion status moving a single step within its normal range of moves. A piece making a long-range move cannot be captured En Passant even when moving less than four steps. For example, a Chatelaine can be captured En Passant only after moving two or three steps diagonally, and by an enemy Chatelaine moving like a King. An unpromoted Rook or Bishop cannot be involved in En Passant, either capturing or captured. Golds can capture each other only if both are array ones or both are promoted from the same type of array piece.

In a corner zone, only the armies whose camps it adjoins may capture, but they can capture each other's pieces as well as those of the other two. There is no restriction on who can capture within camps.

A captured piece enters the capturing player's Reserve unpromoted. That player can then introduce the piece as part of their own army in place of future move. It must return in either the player's own camp, the central zone, or the opposite-colour camp, with the obvious bar on Wings and Points on the last's King rank. Wings, Points, Golds by promotion of those, array Golds, and all opposite-colour captives return as themselves unpromoted. However the following adjacent-colour captives return as different pieces:
* Coppers and Copper-promotion Golds as Silvers;
* Silvers and Silver-promotion Golds as Coppers;
* Bishops and Primates as Rooks;
* Rooks and Chatelaines as Bishops.

A player whose King is en prise to the player about to move is checkmated and - because of the low piece density - their pieces transferred to the Checkmating player. On the board this means rotating them to point in that player's direction, and in Reserve the two Reserves combined. The Checkmating player then makes their move and play proceeds with the remaining players. The first player Checkmated loses and the last to survive wins.

You will notice that this variant uses the following pieces in terms of every kind of return:
* 52 Points;
* 12 Wings;
* 12 pieces that are Copper when played by Red or Green, Silver otherwise;
* 12 the other way round;
* 8 Golds;
* 6 pieces that are Rook when played by Red or Green, Bishop otherwise;
* 6 the other way round;
* 4 Kings.
The astute will realise that this allows play with three standard Shogi sets, with orientation affecting piece type as well as allegience (hence the type switching rule). It is even playable on four overlapping Shogi boards with thin enough borders, although a board specific to the zoning might be more useful.

I doubt that a satisfactory variant of any of the standard games of mainland Eurasia can be devised for a board divided this way. It would be difficult to stop Rooks and, in the Xiang Qi case, Cannons getting too mobile too early. Paradoxically the lack of leaping moves gives Haiku Shogi an air of Xiang Qi.

The name translating as Heavenly Horse (the piece that I considered using but - perhaps wisely given the naming controversy - rejected) is given in various forms across the internet. Tenma is an "average" from which others (Temma, Tenba, Tianma) differ less than from each other.