This page is written by the game's inventor, Aurelian Florea. This game is a favorite of its inventor. 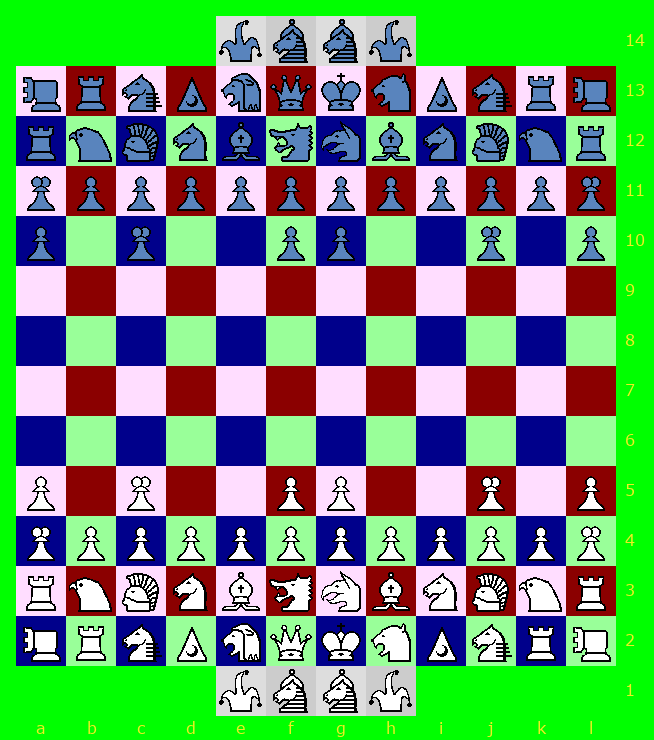 The Pawn moves like an orthodox pawn. It can promote at the furthest 3 ranks for each player. On the rank closest to the player it promotes to either bishop, knight, cannon, wizard or champion. On the next rank the pawn can also promote to rook, joker, knightrider, vulture or sangoma.  At the furthest rank the pawn may also promote to queen, dragon, griffin, tiger or lion. But also, in order to promote, the player must have the required piece in reserve. In reserve enter all lost pieces by the player allong with (from the beginning of the game) 1 queen, 1 rook, 1 knightrider, 2 bishops, 1 knight and 1 champion.

The Queen  is an orthodox chess queen.

The Dragon is a bent rider. It starts the move like a ferz and may stop here or continues toward outside like a rook.

The griffin is a bent rider. It starts the move like a wazir and may stop here or continues toward outside like a bishop.

The Lyon is a bent rider. It starts with a diagonal move of exact 2 spaces (it can stop here  or in the intermediate square) and then continues towards outside like a rook. It may also move like a dabbabah.

The Tiger is a bent rider. It starts with and orthogonal move of exact 3 spaces (it may stop here or in the intermediate squares) and then continues towards outside like a bishop. It may also move like an alfil

The sangoma is a bishop+zebra(3 2 leaper) compound.

The Vulture is a path mover akin to the falcon piece in falcon chess, but it's destinations are the 41&43 squares away from the piece. It may also jump withouth capturing 2 squarez orthogonally.

The knight moves and captures like a regular knight but it can also move (but not capture) with a trebuchet (3,0) or a alfil(2,2) leap.

The wizard steps 1 step diagonally  or leaps like a camel (3,1).

1.Heavy Pieces: Queen, Dragon, Griffin, Lion and Tiger - they worth 9 points in the points count.

2.Average Pieces: Vulture, Rook, Knightrider and Sangoma- they worth 6 points in the points count

4. Light pieces: Bishop, Knight, Cannon, Wizard and Champion - they worth 3 points in the points count

IIn this game there are 4 different castling moves for each side of the king.

When beginning the design of this game I wanted the piece to fall clearly into 3 categories light, average and heavy with respect with there importance in exchanges. This was done in the previous 10x10 apothecary games to favor dynamically balanced endgames (meaning equal endgames where the material is different, example from chess: B+2P vs R and other things that are the same). Now at the end of creating the 12x12 game I don't see why was that a priority because in a such large game it is very unlikely to have rook and pawns endgames. But the did is already done and lessons will be used in the design of future variants. The light and average pieces were also (with exceptions) selected do be as different as possible. The heavy pieces less so as I considered that each set of stronger piece would give the game the name as in my 10x10 games. I don't know if this was a happy choice also. And that is it with my self criticism. From now on I'll explain why each piece type was considered.

The bishop and the rooks where not changed themselves as they are considered by me to be emblematic pieces that needed to be in the game. Moreover the rooks receive 4 spots for being such right pieces for chess. So this game has four rooks. I could not do that for bishops also as there was just not enough space.

The knight if left just with it's usual powers loses strength to the bishop. As I wished for the two to be as strong I had enhanced the knight with just move powers (just move so that it's flavor it's not lost). In this game the just move ability is threeleaper + alfil meaning the full piece in Betza is written NmHmA. I had chosen this kind of enhancement in the apothecary modern game and kept it for the grand apothecary modern game as it covers well the area around the knight and provides speed which the knight now needs on bigger boards. I consider this enhancement after testing to be, among the three enhancements in the three grand apothecary games, the best working one and probably the strongest.

Not much I find there is to be said about the cannon. It is the Chinese chess piece in a western environment. It is a different concept (a hopper) from the other pieces of similar strength (bishop, knight and pure leapers). I chose it because by being visibly different it adds flavor to the game.

I thought the nightrider to also be a natural addition to the game, for a rook strength (average) piece, but it seems in the end it is to much of a trouble maker. I kept it though in the final version in an attempt to try to see if it works out. Anyway I'm working on 12x12 games where it will most likely not be present. To reach a rook strength piece maybe a maorider compound with something weak (like a ferz) is better.

The vulture takes it's concept from falcon chess where the falcon is a 31&32 destination path mover. The vulture (name proposed by HG Muller) is a 41&43 destination path mover in the same way. My idea was that the falcon is a long path mover (with paths longer than a knight jump) of approximate (a bit stronger) rook strength. I wanted something similar. This game already has leapers that leap 3 and something squares away so I went for a 4 and something destination path mover. The vulture is weaker than a falcon because it can be blocked on more occasions, and also because it's longer destinations (although this is undone by the larger board) and so I decided to add a leaping non-capture move to ease the vulture movement and opening development without affecting it's already tremendous forking power. So in this game I have added a just move dabbabah jump. Why 41&43 destination path mover and not a plain 41&43 leaper, as the leaper would be easier to view. Well, the ability to block the piece makes the game more strategic than tactical as players need to open up lines before using the forking power of the vulture. There are also enough leapers and I prefer leapers to stay in the light pieces groups so that their forks of stronger pieces (even if defended matters). To me rook strength pieces and above, need to be able to be blocked as they enter later in the game anyway, they can fork less defended pieces, and must (to be useful) fork undefended pieces. So a strong leaper (and stronger than an equivalent path mover) seems a contradiction. As the leaping part is designed to fork as much as possible and the strong part is usually related with forcing issues on the board and delivering checkmate.

At some point I have decided to introduce something rook strength initially on the brouhaha squares. As there is no zebra move used in this game I wend for a zebra and bishop compound (zebra and rook would have been too strong as the goal was for a rook strength piece). I gave it the name (after an suggestion by Fergus Duniho) sangoma.

As the higher success of my apothecary chess modern game by comparison to the apothecary chess classic game suggests, bent riders seem to be more popular then the Capablanca pieces, so the Dragon and Griffin are back.

Capitalizing on the above mentioned success I have added two more bend riders here the Tiger and the Lyon (because of lack of icons and lack of talent in drawing on my part I had not chosen more fantastic names) . They are also bent rider which bend later than the above mentioned ones. This is why why I have added them an alfil respectively an dabbabah move. That helps their development and makes them be around queen strength.