This page is written by the game's inventor, Christine Bagley-Jones.

'Gods on Pluto' plays with extremely weak pieces, no pawns, and drops (captured pieces are kept in-hand and may be placed back on the board).

Just over half of the pieces have no backward movement. Though there are pieces that can move backwards, the strongest piece is 'Ramshead-Soldier' (Tai Shogi), which moves like a Bishop, but only in the forward directions.

There are 3 'themes' played out on the 9x9 and 8x8 boards, described as follows.

* 'In the Nursery' - plays with the weakest pieces.

Mainline games are 'War on Pluto' and 'Flying Snow' on the 9x9 board.

This is a screenshot of the 8x8 board. 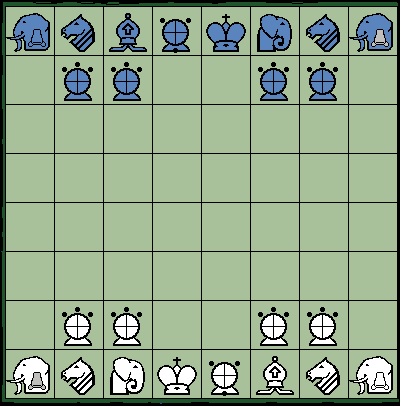 Piece Descriptions: In order of strength according to Zillions.

Xiang and Mao are from Chinese Chess.

The others are pieces i have made up, or pieces that exist somewhere i have never seen :)

you know the rules :)

games notes: love ramshead-soldier, is this piece cool or what :)

i had already finished the game, but i had not released, because of all the times i release, and then update etc etc .. when i was just about to release, news went around the world that Pluto was no longer a Planet :))

zillions would place a normal Dabbaba, if it were in this game, as the 3rd most powerful piece

9x9 board is a nice size, play is very good.

i think zillions under-estimates the mao. with the 8x8, white can maybe 'force' to win an irongeneral with nice mao play from the opening, but this isn't a big deal really, because black will not find it at all difficult to 'drop' the mao to get back this 'exchange'.

'war on pluto' variant does not really play with the strongest pieces .. it just kind of plays with that atmosphere.