Ever since seeing Fergus Duniho's Fusion Chess I have considered applications of fusion. I soon came up with a Fusion Xiang Qi, but a Shogi-based fusion variant has taken a little longer. Here is what I have finally come up with on that front.

My first decision was to use pieces from Mitregi's first two ranks, with the restriction that a piece could not fuse with one having a subset of its move. I then wondered whether to make it a Strategoblastic variant (meaning "building generals") with the part-symmetric generals as simple pieces to be combined (like Fusion Chess' King) and overlapping moves recovered by both pieces on separation, or a Strategoclastic (meaning "destroying generals") one, with them already fusion pieces and separable into a symmetric and a forward-only component. I eventually settled on having both with the same array (abbreviated to SBFM and SCFM), giving this page two variants for the price of one! As SCFM generates Points and SBFM allows Bishop+Silver compounds indistinguishable from Bishop+Point in move, instead of having the Point and Cross unfused in the array I formed the front rank from other relatively short-range pieces. I also did away with promotion, as other mechanisms would be available to extricate forward-only pieces from the enemy camp. 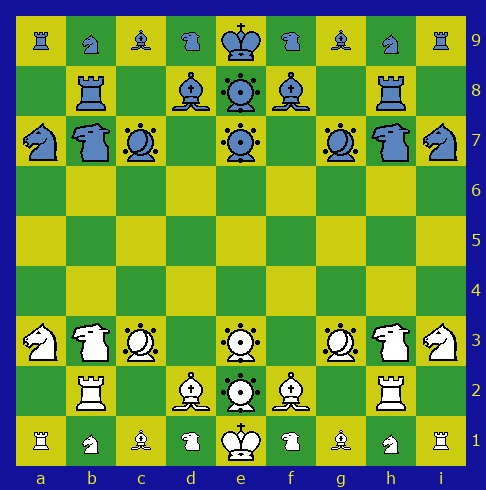 Fusion pieces in SBFM only:
Fusing Wing with Gold gives the GOLDSOWON.
Fusing Mitre with Silver gives the SILVERBOARON.
As yet I do not allow fusing of either general with oblique pieces as I have not coined suitable names for the resulting pieces.

There is no initial double-step move, En Passant, Castling, or promotion.

Fusion involves an unfused piece using its usual move to reach a square occupied by an unfused ally and the two becoming a piece having the moves of both. If the destination square is in the enemy camp, at least one piece must possess a backward move.

Fission involves one component of a fused piece making a noncapturing move and the other staying still. The move must be a usual move of the moving component. If the original pieces had any move in common they both retain that move. Thereafter the two can then continue as separate pieces. A fused-piece move into the enemy camp must be fission.

A captured piece enters the capturing player's Reserve, separating out into its components in the case of a fusion piece. That player can then introduce simple pieces as part of their own army in place of a later move. Players cannot combine pieces in Reserve, or even preserve fusion pieces as captured, to reintroduce fusion pieces.