This variant is inspired by the likes of Chess for 3, 3 Handed Chess, 3 Player Chess, and Yalta - 3-player versions of FIDE Chess in which, give or take advantages of move order, each of the six relations of player x to player y is the same. This cannot be achieved with a 4-player FIDE as relations betweem opposite-colour players always differ from those between adjacent-colour players. The reason is that 8 of a player's files can be divided into 2 equal groups of 4 shared with each of 2 other players, but not into 3 equal groups shared with each of 3 other players. It then occurred to me that the 9 files of Xiang Qi can be divided into 3 equal groups of 3 for a 4-player variant, with suitable treatment of the middle ranks. Again like e.g. Yalta it preserves the piece density and file length of its 2-player original.

Here is my effort in that direction. As one River crossing flies over another (hence the name) it is not a normal 2d variant but, like L. J. Weijden's Novo Chess and my own Flyover Shogi, nor is it like conventional 3d variants. I have therefore not ticked a dimension number. Note also that although I have given double the number of ranks and of files, as each of one intersects only half the others the total number of cells is also only doubled. There are differences between Flyover Shogi and Flyover Xiang Qi, for while both the Shogi board and the Xiang Qi board comprise 3 groups of 3 files the Shogi board also comprises 3 groups of 3 ranks, where as the Xiang Qi board comprises 2 groups of 5 ranks. In both Flyover variants each camp has complete 9-cell ranks, but in Flyover Shogi it is only the camps, with the middle sections being 3x3 blocks isolated from other files, whereas in Flyover Xiang Qi it is the whole half-boards, with only the Rivers being just 3 files long and isolated from other files.

Generic graphics are more suited to this variant than to Flyover Shogi, as every cell can be shown as part of a Xiang Qi half board. It falls to the lettering of the files to indicate how they continue across the complex of waterways, always continuing directly from one player's fifth rank to another. Each of the 6 groups of 3 orthogonals is marked on the cells of those ranks. 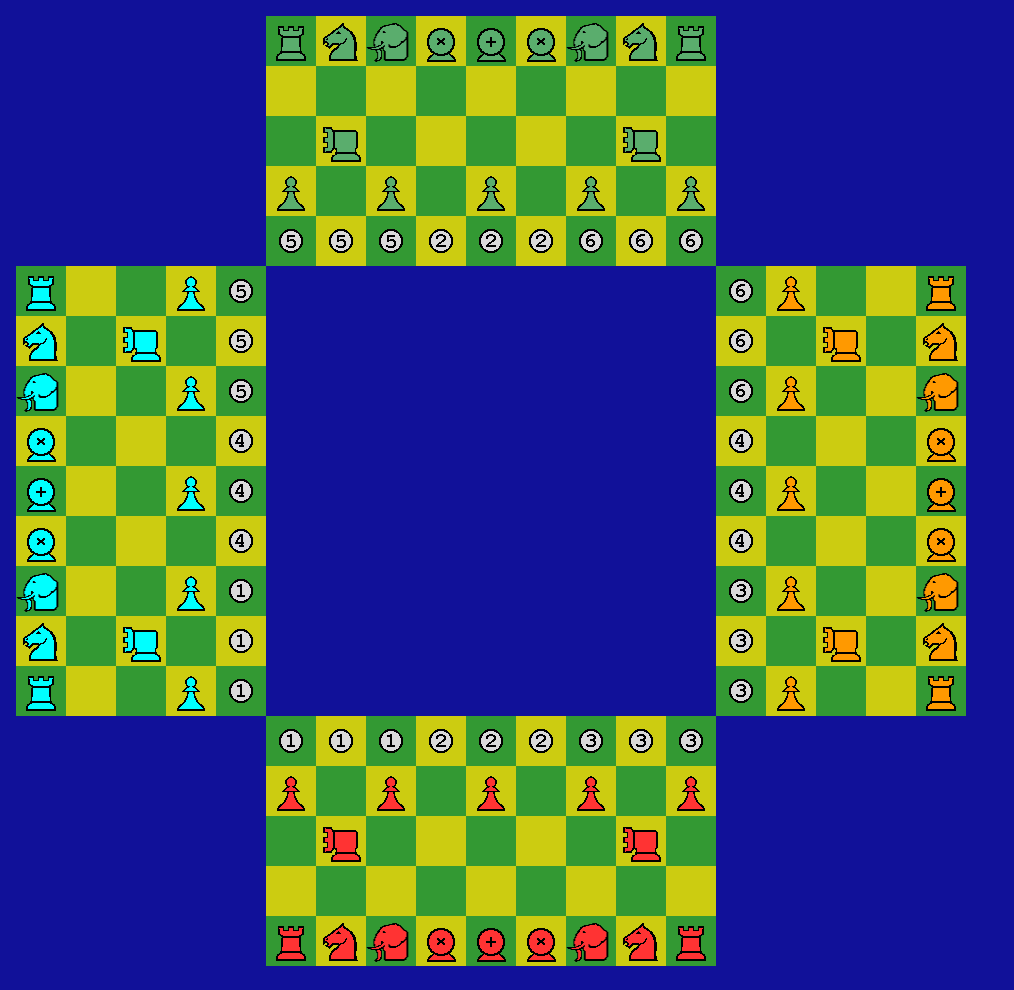 Pieces are the same as in Xiang Qi itself. Forward is taken to mean toward the nearest enemy camp. As it happens, no simple diagonal move crosses the River. The only complexity is where Knights go when crossing, and I suggest that they cross whichever River segment is exactly halfway between the start and end of the move. Thus a crossing between Ferz and Knight files is always between adjacent-colour players' quarters, and one between General and Elephant files is always between opposite-colour players' quarters. A crossing between Ferz and Elephant files crosses whichever River segment borders the start or end of the move.

Red moves first, and play proceeds in anticlockwise order. Rules are largely as in Xiang Qi.