For many years I have been designing three levels of geographically-themed variants.
* At one extreme are the Armies of Faith series themed on the religious differences of the civilisations west of the Sea (also called Bay) of Bengal. AOF is not touched on further on this page.
* At the other are the Anglis Qi offshoots set mostly in individual English counties and representing the combination of one or more (1) rivers; (2) "excel-league" universities; and (3) cathedrals or their suffregan outposts. The most relevant to this page is Avon, set on the historic Somerset-Gloucestershire boundary. In the Dark Ages this was the national frontier between Wessex and Mercia, but after the union of these and five other kingdoms of the time into England the city of Bristol straddled both sides of the boundary.
* In the mid-range are 3d variants alluding to England itself uniting with Scotland, and in some cases Ireland, into larger realms still. It is, however, a later "England" than the union of the seven and has subsumed Cornwall, Cumbria, and Wales in between. It is because Wales was conquered, unlike Scotland, that it became a "principality" within the English "kingdom" rather than one of the equal "kingdoms" of the union, and is unrepresented in the British royal arms or national flag. My variants largely reflected this status.

My own lack of reference to Wales was for want of an obvious piece to represent it. The Welsh flag bears a dragon, and there were two 2d pieces termed Dragon on these pages when I first encountered them. Neither appealed to me. That was, however, before Jared McComb's Ryu Shogi introduced a wider range of more specific dragons. Dragons in heraldry come in many colours - the green one of the City of London, the gold one that some say was an emblem of Wessex, and the red one of the Welsh flag. For a shade of green there is a choice of going 3d for a Jadedragon, or going hex with Chevron Ranks for an Emeralddragon, but Ryu Shogi refers directly to two of the seven heraldic colours, Gold and Silver, and indirectly to a third, red, through Copper. So the idea came to me to pit Golddragon against Copperdragon across the expanse of water into which the estuary of the Severn, the river which the Avon joins at Bristol, opens. This expanse is termed the Bristol Channel. To the south is again Somerset, historically in Wessex. To the north is Glamorgan, the part of Wales where another populous port like Bristol, the Welsh capital Cardiff, and its suburbs are located.

Well that was where the water in between came in - paradoxically making a variant with Ryu Shogi pieces more akin to Xiang Qi than to Shogi. As it was obviously more substantial than a river I decided to heavily restrict crossing from one player's half of the board to the other. In general, pieces would have to use a Ferry in the style of my Ferry Xiang Qi. It seemed sensible to lift this restriction from dragons, which can supposedly fly and are perhaps too large to fit on a ferry. It then occurred to me to extend the ability to fly to other pieces with a flying aspect to their name, including the Rook but not the Bishop.

Originally I designed this variant to be played, like my even earlier "micro-regional" Magna Carta Chess, with usual equipment if you can remember that the two armies move differently, although a pair of extra markers was still required for Ferries. The original array had Copperdragons replace Bishops on the Welsh side as Anglicans are both a minority of Welsh Christians and officially disestablished in Wales. As this preserved some long-range diagonal moves the natural way to balance this seemed to be for Golddragon to replace Rook on the Welsh side, preserving the long-range orthogonal moves. Ultimately this gave the Welsh side too great an advantage.

After JÃ¶rg Knappen pointed out the huge advantage to Wales of having Rooks when Golddragons cannot occupy Ferries, I came up with some possible ways of mitigating this problem and listed them including my preference. Meanwhile I moved the Ferries to give Wessex more of a balancing advantage and removed some ambiguities that had been pointed out. Finally (fittingly enough on Saint David's Day 2012) I decided to abandon the "usual-equipment" aspect and have the dragons on extra ranks added behind the FIDE camps - and add a sideways Rook move to the Bishops on the Welsh side to balance moves completely. The extra ranks make the Xiang Qi likeness even stronger. 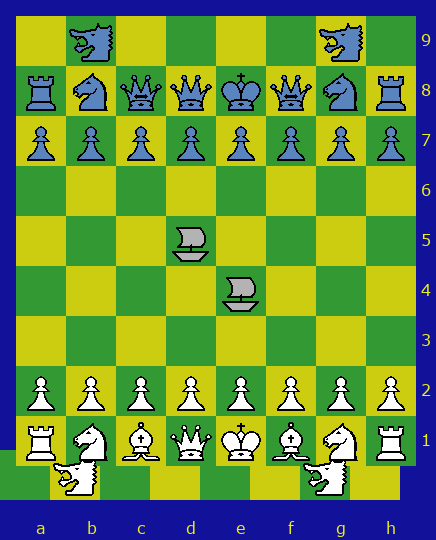 Normally, pieces crossing between the two middle ranks can do so only by using a Ferry. Pieces can cross without a Ferry using a Rook move if they have the full forward and backward components of that move, but not if their orthogonal move is restricted to fewer than three steps and never by a Bishop or Knight move.

Play alternates between the two players, starting with the Wessex side (numbered 1 in the array Ascii Art).

Three kinds of move involve a Ferry. A piece can move over, onto, or off a Ferry by its normal noncapturing or capturing move, move as a FIDE King with the middle two ranks taking the Ferry with it, or send the Ferry from under it to any other square on those ranks. The first includes usual restrictions on any other piece already occupying the Ferry, and the last two exclude a square containing a Golddragon or Copperdragon or the other Ferry. For example a Rook, or Queen moving like a Rook, can move over an empty Ferry, but not an occupied one, en route to another square. A Pawn can use a Ferry to cross either way, without restrictions as to which moves are noncapturing and which capturing.

A piece can move on a Ferry to capture the enemy kind of dragon, as the dragon will not be there at the end of the move.

Thematically the special captures by the dragons represent a warrior on a ferry being easier to spot than one on land in the orthogonal case, and the dragons snatching them off the ferry and breathing fire on them in the diagonal case. Capturing a dragon while on a Ferry represents drawing up alongside it to slay it. The Queenfiler's Japanese name of Honcho means Free Boar - a creature that cannot fly and could be found for real in Britain at the time of the dragon legends. This variant does not use the Queenranker but its Japanese name of Flying Ox would suit it having the move along a file that here allows the flying action.

I have noticed a certain similarity between this game and Jose Carrillo's Ajax Chess, specifically that pieces have a limited additional ability to move like a King. In Ajax Chess it is conditional on moving to unoccupied squares. Here, as in Ferry Xiang Qi, it is conditional on moving within the middle two ranks, with a Ferry underneath, to a square not occupied by another Ferry. The similarity was not however intended, as Ferry Xiang Qi is many years older than Ajax Chess. Other "carrying" pieces are listed at the end of my piece article Man and Beast 21: Lords High Everything-Else.