The name Dream Chess refers to the fact that the idea behind this variant came to me in a dream, in the early hours of the 16th of November 07. I have fast-tracked it because soon after waking I realised that one form of it had 46 squares and was therefore eligible for this year's contest. Since thinking about it whenever I've had any free time today I realise that it has certain similarities to my previous variants L Shaped Chess, Intrusive Squares, Gateway Chess, my Corner Variants, and even my 4-player Pass Variants.

The general principle is that any square board of side x can have its squares reduced by removing from opposite corners a square block of side y, for any integer y less than x/2. This formation can also be seen of two overlapping square boards of side x-y - supersquares within the board as a whole - with the overlap a square array of side x-2y. It can quickly be proved that these definitions give the same number of squares: 2(x-y)Â²-(x-2y)Â² = 2(xÂ²+yÂ²-2xy)-(xÂ²+4yÂ²-4xy) = (2-1)xÂ²+(2-4)yÂ²+(4-4)xy = xÂ²-2yÂ². The case of x=8, y=3 gives 46 squares. I include the number 46 to distinguish from potential variants with different values of x and y - which as far as I can see give a different number of squares for each combination from x=6 (with half-size armies) to x=12 (probably with Pass-variant-style enlarged ones). However, x=13, y=5 gives 119 squares - the same as x=11, y=1. 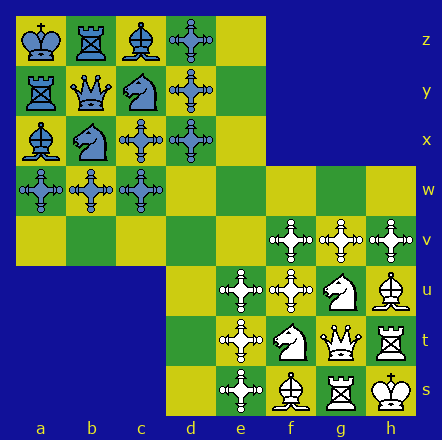