This page is written by the game's inventor, Ian Douglas.

Douglas Modern chess is a new variant that uses the same board, pieces and rules as conventional chess, but has a different starting position. 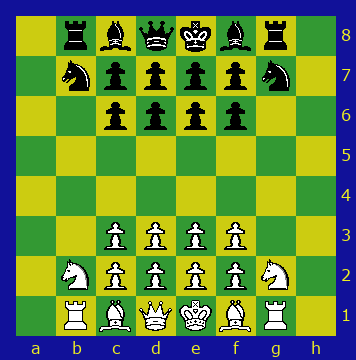 Pieces are standard chess pieces with same movement rules, some oddities noted in next section.

The rules are as per standard chess.

En passant: en passant works as normal, but only for the pawns that started on ranks 2 and 7, as per normal chess.

The layout leads to more decisive / less drawy games amongst computer engines, certainly with a shorter time control like 3 minutes/+5 seconds. On occasion, however, they do get themselves tied up in pawn block knots. Humans would probably break those blocks quickly.

There is further discussion on my blog, starting here: Rethinking chess.

I ran a mini tournament which played 162 games, and despite there being no opening books, the games were all unique. The games may be viewed on my blog.