This variant came about by extending Nested Chess to another level of nesting. This time I pushed the boat out and went for riders of semi-royal pieces. I noticed a similarity to Timur's Chess, which extends the Xiang Qi one-binding-per-bound-piece-type rule to a larger number of bound pieces. The most severly bound Timur pieces do not appear in their own right in this variant, but their riders and compounds do.

Unlike Nested Chess itself I stick to just a face-to-face array - reflecting the character of the doubly-transformed subarray and the original pieces equally well.

The name is self-explanatory. No geographical theme is intended, despite a similarity in sound to the Irish city of Dublin.

Note the missing corner squares, derived from the Nested Chess board. 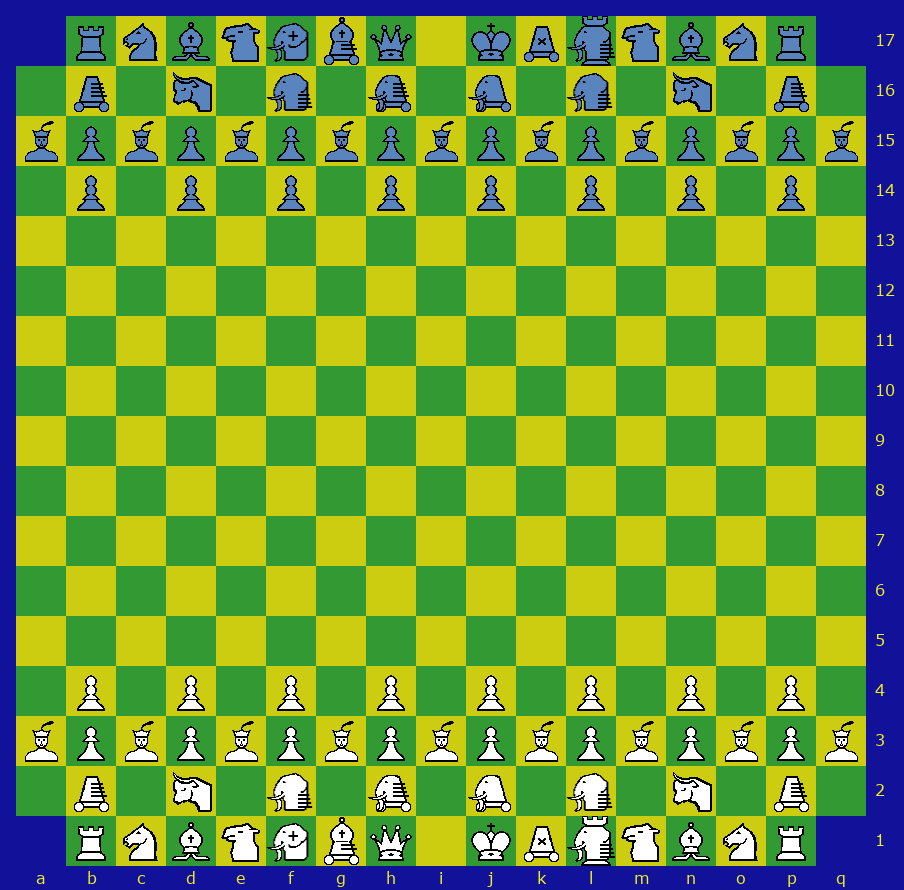 Pieces fall into four groups. Short-range radial pieces (group A) have special properties. Others may be bound to some or all of the 64 squares of the original board (group B), bound to all 141 cells of the intermediate board (group C), or unbound (group D). Any intermediate cell that cannot be stopped on can be leaped over, noting that initial double-length moves are optional. Thus a Dabbarider or Elephrider moving four squares can leap over pieces on any intermediate square except the middle one, but a Rook or Bishop doing so can leap over none. This is to prevent bound pieces being affected by pieces outside their binding. Note the uniform extrapolation of my usual Hopping-piece images to Group A's 2-step linepieces.

Pawns, Esquires, and Vanguards all have an optional double-length noncapturing initial move. The halfway square must be empty. A piece making such a move may immediately be captured En Passant by an enemy of the same kind but by no other piece, not even one of the other two forward-only kinds.

Castling involves a King and Rook, or an Alibaba and Dabbarider, moving toward each other. The King/Alibaba moves four squares, and the Rook/Dabbarider to the King's/Alibaba's halfway square. All intermediate squares on the first rank, or even ones on the second, must be empty at the start of Castling. The subset of those on the King/Alibaba path must be unthreatened.