The initial setup is completely the same as normal shogi.

Unpromoted Eight-directional Knights move the same as Western chess knights, being (2,1) or (1,2) leapers. If an Eight-directional Knight moves to a promotional zone, it becomes an Eight-directional Promoted Knight (Japanese: å…«æ–¹æˆæ¡‚, or simply æˆæ¡‚), which, in addition to moving as a gold (as a normal promoted knight does in shogi), may move also as a Western Chess Knight. In fact, this piece is so powerful it could deliver mate with relative ease without requiring a protector, as normal shogi pieces generally do when giving checkmate.

In the example diagram below, the black king has already been mated by the Eight-directional Promoted Knight alone. 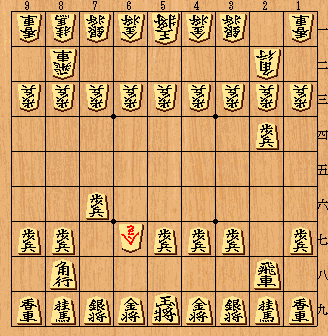