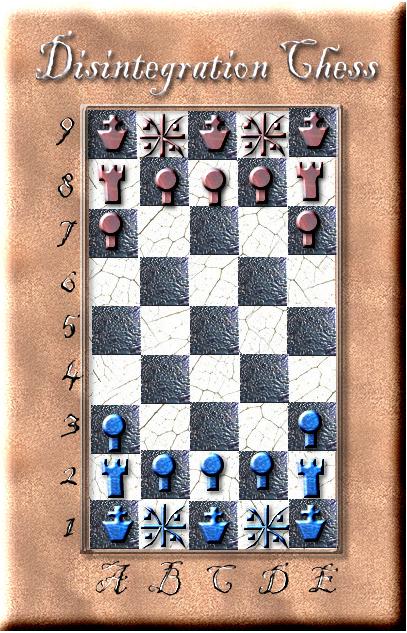 "Disintegration Chess" is an entry for the 45/46 square contest. The board was modified to the 9x5 board seen above.* Object of the game: Disintegrate your opponent's 3 Kings. (Put each of the three Kings into check.) Putting a King in check causes it to disintegrate. Only Kings disintegrate. Pawns and pieces are removed only by displacement. *See the notes section regarding an earlier 7x7 based board and the reason for changing to the 9-ranked board. Note: a working pre-set is at this link: /play/pbm/play.php?game%3DDisintegration+Chess%26settings%3DDC Plans are to make a pre-set that looks similar to the above image. 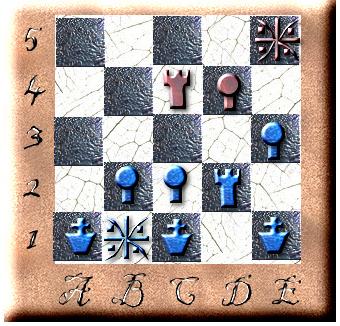 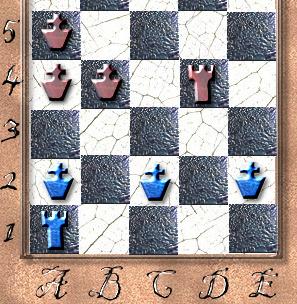 We can see some interesting disintegration factors in the above position. Let us assume that there are no other pieces on the board. Also, please note that I am not saying the first moves shown are best-- I just want to show some important chain reactions. CASE 1: Blue to move. Assume Blue moves 1. King A2-B3. This causes that Blue B3 King to disintegrate itself, plus the Red Kings on A4 and B4, and the Blue Rook on A1 is now open to [and disintegrates] the last Red King (on A5). Red gets one last move, and plays Rook to d2, disintegrating Blues last 2 Kings. The game is drawn. Note that 1. King A2-A3 will also result in the 3 Red Kings disintegrating. Do you see how? CASE 2: If it is Red's move, it looks like he would win with Rook d2. This makes Blue Kings on c2 and e2 disintegrate. When the c2 King is gone, the a2 King disintegrates, when that happens, the Rook on a1 attacks the two exposed Red Kings on the A-file, they disintegrate. But, Blue did not even move. He now gets his last move. Rook A4, or Rook to B1, either destroys the last Red King. The game is drawn.

The Fye'tin was inspired by Adrian Alvarez de la Campa's "Templar" piece (found in his excellent game Templar). Movement was simply made opposite. If the Fye'tin exists somewhere under a different name I can rename it later... currently I am not aware of it existing elsewhere. The Fye'tin image - The plus shape indicates the 2-move slide. The curves over a small image represent the "leap over a square" aspect. The following text concerns the original board and why it was replaced. The original board was 7 x 7 with four corners removed. I like the looks of it. As George Duke has stated, this was the same technique used in Horus' 7x7 with the same 4 corners removed and there also the central square... Anyway, I do believe the 7 x 7 board is visually more interesting. However, Abdul-Rahman Sibahi wanted to see an example of disintegration. I then added a few moves to show what could be considered a standard opening and a defense to it. On the 7 x 7 board White (Blue) can use a Fye-tin to quickly go for a double-disintegration. He does this by getting a Fye'tin to check Red's (Black's) two corner Kings. Red, knowing this, will move one King out of the check area. The question is, "Is the Fye'tin worth this one King?" 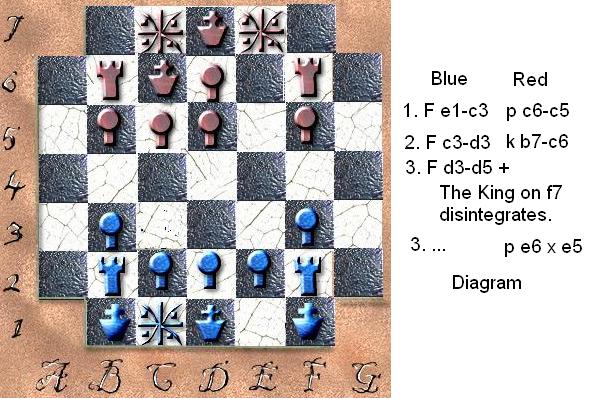 The original board appeared as in this figure. It looks nice, but White has far too much control in the opening. By removing the ten side squares and adding them to the center as two ranks, we remove the quick and forceful Double Disintegration Attack Opening... of course, the technique remains for later use by either side. Gary K. Gifford, 9/11/2007 updated 9/16/07 working pre-set added on 9/20/07