This variant started with the idea of putting the duals of the Chaturanga (4R) back rank onto another dimension but still within some kind of 2d board. This is in contrast to Courier and my offshoots of it, Courier Kamil and Courier Ashtaranga, which add them alongside the original pieces.

Immediately I thought of Quadruple Besiege Chess, as this has camps facing in both dimensions - sa well as both directions in each dimension. Unfortunately the simple 2x8x8 would not work as it would be impossibl.e to avoid starting with pieces En Prise. Next I considered linking the two boards inm some completely different way, perhaps so that they would overlap, but this would make for too complex a geometry and too crowded a board. The next consideration was retaining the standard QB interface but enlarging the boards to 2x10x10 with Pawns topping and tailing the ranks, but that would still leave the new Pawns starting En Prise. After that it was a choice of going to 2x12x12 or taking out the Camels and bringing Knights to the corners where the original Pawn ranks intersect. The latter seemed more promising as I really wanted to avoid exceeding 200 squares - over thrice the Chaturanga/FIDE size and over twice that of the Courier board - and was defensible in that the radial pieces would still all be nicely dualled even if the oblique ones would not.

Then it suddenly struck that having a single 12x12 board and drawing the Knights in and removing Camels was an option, and one not only reducing the number of squares well below 200 but simplifying from the QB joins by having simple toroidal joins. This gave Pawn diagonals facing along a quadruple diagonal besiege. My last touch was putting the Bishops further in than the Dabbabas to prevent any initial En Prise. I was happy with this array.

The final stage was a name. Well, as the arrays were diamond in shape on a board that was a toroidal ring, I realised that these words went rather well together. 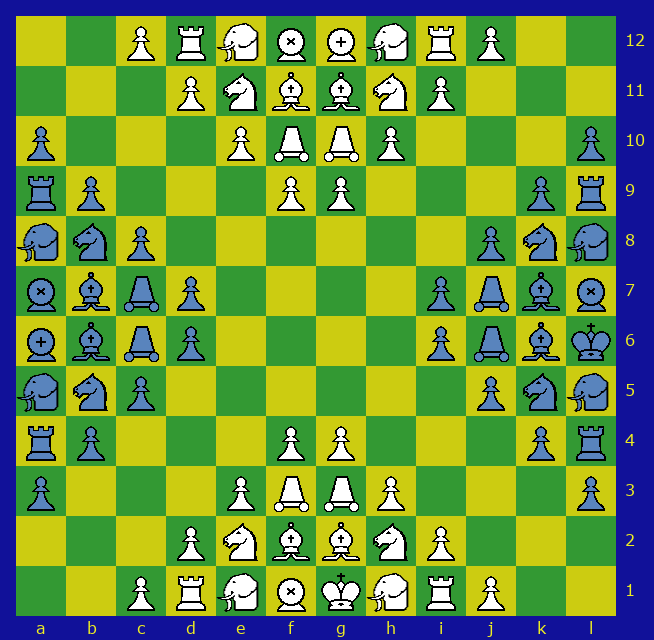 I have shown the board broken through both camps. I could have chosen two breaks through the White camp, but the diagram that I chose illustrates the equal nature of the wraparound for both players and also draws attention to the underlying 4R pattern.

The pieces are listed in order outward. The following table illustrates how the number of pieces per army (PPA) grows to twice the number in the first variant in the series to use them, and their array distance (AD) from the King/Wazir/Ferz group preserves its order through the series.

Pawns reaching an enemy King/Wazir/Ferz square can obviously move no further as Pawns, and so must be promoted. The promotee can be any other kind of capturable array piece, although I anticipate a preference for Rooks!

The variant can be played with two pairs, distinguishable by size, of identical standard sets. Large pieces (Queen apart) as themselves, large Queen as Wazir, small Queens as Ferzes, small Knights as Dabbabas, small Bishops as Elephants, and small Rooks on standby for promotee Rooks!

A few subvariants come to mind. They are too minor to use as a basis to tick extra options.
* The board as shown, without the wraparound, but allowing Pawns on the edge to capture away from it.
* As above with four different players, substituting whichever of King or Wazir is missing for each Ferz.
* Diamond Ring Mitregi. This substitutes Wing for Dabbaba, Mitre for Elephant, Gold for Wazir, Silver for Ferz and inherits Mitregi promotion anywhere within the enemy camp. For long/range FO moves each step must take the piece further from camp.
* 4 Linepiece Diamond Ring variants. These substituute Gryphon/Girlscout/Wolf for Dabbaba, and Anchorite/Boyscout/Fox for Elephant respectively.
* Diamond Ring Wildeurasian. This substitutes Cannon for Dabbaba, Arrow for Elephant, Queen for Wazir, Tank for King's Ferz, and Gnu for Wazir's Ferz. The last three may not enter the enemy camp but can interact between the camps.