This game can downloaded from Zillions of Games website. 'Dai Dai Shogi' is a large board variant of shogi (japanese chess). According to Wikipedia, it dates back to the 15th Century. It is played on a 17x17 board. Each player begins with 64 different piece types, and more pieces come into play due to promotion. Therefore, it can be difficult to play, trying to remember how all the pieces move. 'Dai Dai Shogi Western' plays with western style graphics, and i have attempted to make this game easily playable by editing the graphics to show how most pieces move, just by looking at the piece. I hope i have been successful with this attempt. Below the screenshot you can read full info on the game. 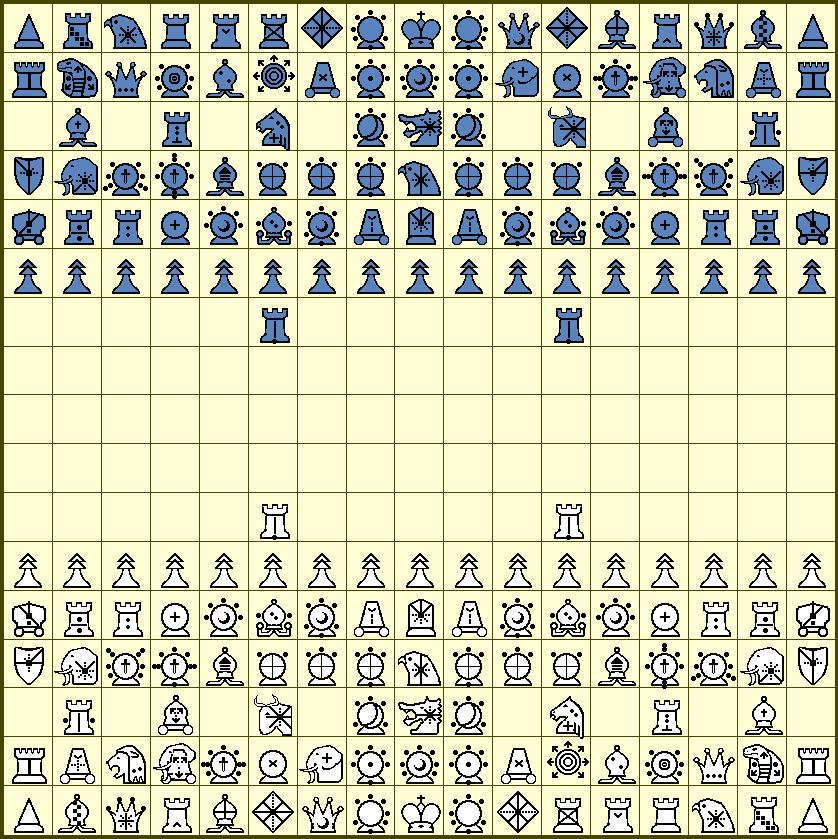 Dai Dai Shogi ('huge chess') is a large board variant of shogi (Japanese chess). The game dates back to the 15th century and is based on the earlier Dai shogi. Apart from its size, the major difference is in the range of the pieces and the â€œpromotion by captureâ€ rule. It is the smallest board variant to use this rule.

The objective is to capture the opponent's king. Unlike standard shogi, pieces may not be dropped back into play after being captured.

Two players, Black and White play on a board composed of squares in a grid of 17 ranks (rows) by 17 files (columns) with a total of 289 squares. The squares are undifferentiated by marking or color.

Each player begins with 96 pieces of 64 different types. In all, the players must remember 68 different moves.

A NOTE ON GRAPHICS:

Generally, a straight line on a piece graphic indicates an unlimited slide, like a queen, rook or bishop. The line would go to the end of the piece graphic. If a line does not go to the end, it genearlly indicates a 1-3 or 1-5 step move. If the graphic was unable to 'handle' 3 or 5 dots (not big enough or clear enough), then a line, not going to the end of the piece, would be used to indicate 3 or 5 squares. There is only a couple of pieces with this 'problem'.

Pieces that move 1-2 squares or 1 square should be easy to see. I think, after a few games, you should be able to learn how all pieces move.

The players alternate making a move, with Black moving first. (The traditional terms 'black' and 'white' are used to

differentiate the sides during discussion of the game, but are not literally correct.) A move consists of moving a piece

on the board and potentially promoting the piece. Each of these options is detailed below.

Unusually for a large-board shogi variant, only a minority of pieces (20 of 64) are able to promote. The rule for promotion

in these larger games is different from smaller board variants. See below for promotion piece list.

A piece promotes at the end of its first move to make a capture. Promotion has the effect of changing how the piece moves,

and is effected by turning the piece over after it moves, revealing the name of its promoted rank. Promotion for pieces able

to do so is both compulsory and permanent.

This is very different from smaller shogi variants, where pieces promote when they cross a promotion zone (the enemy camp),

and where promotion is optional. The dots on the dai dai shogi board that would represent promotion zones in other games only

function as placement guides for the initial setup of the two camps.

Most promoting pieces promote to a piece that exists in the initial setup of the board. However, such a promoted piece cannot

then promote a second time as its namesake does. For example, a lion promotes to a furious fiend. However, while an eastern

barbarian promotes to a lion on its first capturing move, it does not further promote to a furious fiend on its second. Rather,

it remains a lion for the rest of the game. This should be obvious from the game pieces, which only have two sides.

If a piece which is only able to move forward (a pawn, lance, stone general, wood general, or iron general) reaches the far rank,

it is unable to move further and must remain there until captured.

piece is displaced and removed from the board. A piece cannot move to a square occupied by a friendly piece (meaning another

piece controlled by the moving player).

Each piece on the game moves in a characteristic pattern. Pieces move either orthogonally (that is, forward, backward, left,

multiplication sign, Ã—). The lion and furious fiend are exceptions, in that they do not move, or are not required to move,

in a straight line.

If a piece that cannot retreat or move aside advances across the board until it can no longer move, it must remain there until

Many pieces are capable of several kinds of movement, with the type of movement most often depending on the direction in which

they move. The movement categories are:

Some pieces move only one square at a time. (If a friendly piece occupies an adjacent square, the moving piece may not move in

that direction; if an opposing piece is there, it may be displaced and captured.)

Some pieces can move along a limited number (2, 3, or 5) of free (empty) squares along a straight line in certain directions.

Other than the limited distance, they move like ranging pieces (see below).

Several pieces can jump, that is, they can pass over any intervening piece, whether friend or foe, with no effect on either.

These are the lion, kirin, phoenix, and poisonous snake.

Many pieces can move any number of empty squares along a straight line, limited only by the edge of the board. If an opposing

piece intervenes, it may be captured by moving to that square and removing it from the board. A ranging piece must stop where it

captures, and cannot bypass a piece that is in its way. If a friendly piece intervenes, the moving piece is limited to a distance

that stops short of the intervening piece; if the friendly piece is adjacent, it cannot move in that direction at all.

The hook mover and long-nosed goblin (tengu) can move any number of squares along a straight line, as a normal ranging piece,

but may also abruptly change tack left or right by 90Â° at any one place along the route, and then continue as a ranging piece.

However, a hook move is functionally a single move: The piece cannot capture twice in one move, nor may it capture and then

move on. It must stop before an intervening piece (unless it first changes direction to avoid it), and must stop when it captures,

just like any other ranging piece. It can only change direction once per move.

see below for full description.

When a player makes a move such that the opponent's king could be captured on the following move, the move is said to give check

to the king; the king is said to be in check. If a player's king is in check and no legal move by that player will get the king out

of check, the checking move is also a mate, and effectively wins the game.

A player is not allowed to give perpetual check.

A player who captures the opponent's king wins the game. In practice this rarely happens; a player will resign when loss is inevitable

A player who makes an illegal move loses immediately. (This rule may be relaxed in casual games.)

If the same position occurs four times with the same player to play (sennichite), then the game is no contest. (Recall, however,

the prohibition against perpetual check.)