Since the invention of the Crooked Bishop there have been several variants devised for Crooked pieces, including my own Herichess. It occurred to me to also consider a whole board that is crooked, and this is what I have devised here - although its linepieces are entirely straight.

Since first posting this page I have had my attention to two earlier variants that could be described as "Crooked Board Chess". Romanchecko's Chess has a similar level of crookedness, while Zigzag Chess could be seen as the possibly inadvertent "Really Crooked Chess" in George Duke's comment below.

I decided not to break up the board so much as to require the use of, for example, Crooked Rooks, but to stick to 4x4 supersquares - a terminology inherited from Intrusive Squares which deals with concavities the same way. I also decided to arrange it so as to minimise shortening and lengthening of Pawn treks, ruling out having some files of length 4. I eventually settled on having all files of length 8 but some ranks of width 4.

Arrangement of pieces is heavily influenced by John Groeneman's Half Chess, which has 4 files throughout and no Pawns, via my own Fivequarters, some versions of which have some or all Pawns added back in. 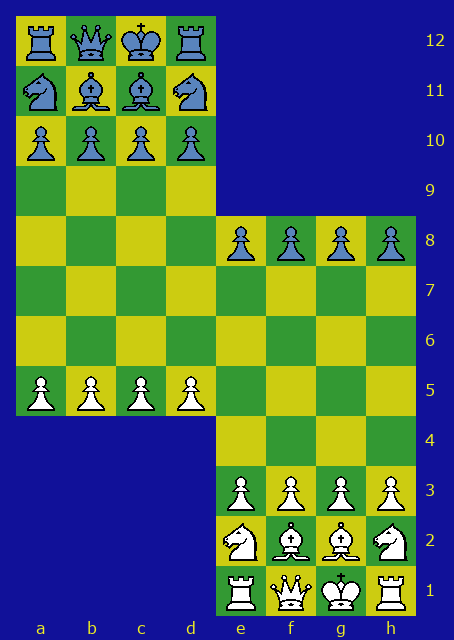 The one-foot-in-the-grave rule applies. Thus Kings and Knights cannot cross between ranks 4 and 5, or 8 and 9, and also between files d and e, in the same move. Queens and Bishops cannot do so in the same step of a move, but they can cross one and then the other as parts of a longer move.

Pawns starting at the back of their file may make a double-step noncapturing move from either that cell or the next, and may immediately be captured En Passant by enemy Pawns. Pawns starting in front of their allies have no double-step move. Unpromoted Pawns are barred from capturing from file d to file e and vice versa. Promotion is required on reaching the end of any file.