The primary inspiration for this variant is Courier de la Dama, which builds on Courier by stripping out the severely bound Elephants, doubling up the Ferz to have cover both bindings, and adding the FIDE Queen to really boost the power.

Well, I've done a few Courier variants of my own in my time, most recently one with Cannons and Xiang Qi steppers, but so far always with no combined capturable piece. I even stripped out the Prince (aka Mann). It was when I began contemplating a 4 player Courier that I revisited CDLD in earnest, as the Queen is one of relatively few coloured images. It then occurred to me that combining the Queen, a retained Prince, a second Wazir, my variants' Camels, and a Gnu would create a Courier-based variant but with the 2-pairs-of-duals-plus-compound pattern of pieces characterising both Wayne Schmittberger's Wildebeest Chess and my offshoot thereof Wildeurasian Qi.

As I add extra pieces but preserve the original board I push steppers forward to the second rank, and adjust the Pawns accordingly.

The name is of course an extrapolation of "de la Dama", noting the convention that a mixed-sex group takes the masculine gender. 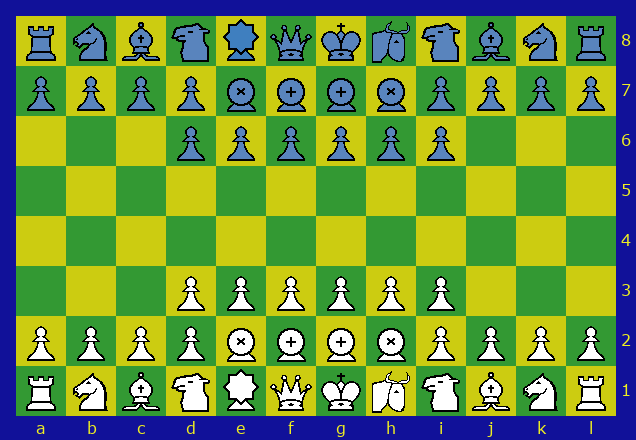 The rear Pawns have an initial noncapturing double-step move, and may be captured En Passant. The front Pawns are already far enough forward not to need one.

Castling involves the King moving three steps either way along its rank, and the corresponding Rook moving to the square two steps from the King's starting square. Usual restrictions apply.

There are no other special moves such as CDLD's Ferz-initial-Elephant-leap option - not least as Ferzes start further forward than in that variant.

Pawns reaching the far rank must be promoted to Queen, Gnu, or Prince.

Check, Checkmate, and Stalemate are standard. As the compounds are array pieces, and are strong enough to make Checkmate easier, there is no alternative win of the kind found in my earlier Courier variants.

As with my previous Courier variants and WEA Qi, this variant can be played with two standard sets differentiable by size. In this case the small pieces would be used as follows: King as Gnu, Knights as Camels, linepieces as corresponding stepper. Pawns of both sets would be used indiscriminately.