The starting point for this variant was a series of pieces based on the Panda, or odds-only Rook. The inspiration for naming copmpounf ones came from having my attention drawn to statues of the characters Harlequin and Columbine from the Commedia dell'Arte in the grounds of Cliveden in South Buckinghamshire. That location is on a southward bend in the Thames, upstream of Runnymede where my Magna Carta Chess is set, but downstream of Oxford where my Isis is set. Curiously it was my friend Isis Maitreya who drew my attention to those figures. Looking back I also owe something to William Overington, as the surroundings rather echoed the theme of his Tree Garden Chess.

Since first posting this page I have posted a variant on a larger board with a larger hole in it, Herichess. One of the subvariants of my new 3d variant Flipped-return Nichtschach, BÃ¤rnichtschach, features CDA pieces along with the Unicorn, Duchess, and Governor and their odd-only versions the Raccoon, Pantaloon (another CDA character), and Balloon. More recently I have used the Panda and Bear, though not their compounds either with each other or with standard linepieces, in GraTiA.

The board can be thought of as a 5x5 board with the centre square and the four corner squares missing, and each remaining square then split into 2x2 smaller squares. This gives 80 cells altogether, with camps of 6 files by 2 ranks, but 10 files on each player's next 2 ranks. The missing centre cells block the Pandas from going too far on the first move. An alternative to conventional cell colouring is to replace the white squares with red and green on alternate ranks, and the black ones with yellow and blue likewise, but that is optional. A four-colour board would certainly echo the Harlequin reference. Note how the central King-Queen pair is preserved, and the Harlequin and Columbine too are side by side. 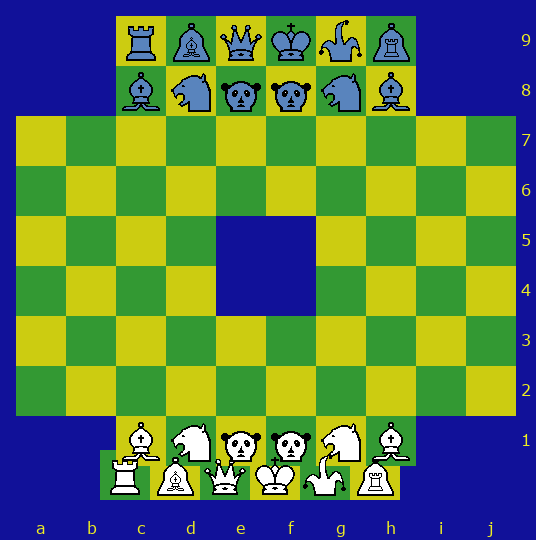 Since first posting this game I was encouraged to rethink it as games are likely to be on the short side - though not with enough certainty to qualify for the 32-move contest, even had anyone thought of this variant at the time. One obvious extension is to use the board's symmetry to extend it to a four-player variant, giving twice the piece density and an element of alliance-making and treachery. Checkmated armies - those whose King is threatened with capture by the player about to move - could be taken over, once their own King was removed, by the threatening player. Another option is to allow Shogi-style reintroduction of captured pieces so that the weakest pieces aren't permanently lost at an early stage. Certainly the few pieces of each of many types make Shogi pieces (including some promotees) the equipment most suiting CD'A Chess, and these would facilitate both types of defection. A third option, perhaps better than the sum of its parts, is apply both, involving players being cautious not to let allies get too strong through captures for when the alliance ends! These I term DOUBLE CD'A CHESS, CD'A CHESSGI, and DOUBLE CD'A CHESSGI. The choice between the terms Chessgi and Bishogi is somewhat arbitrary given the absence of promotion, but I choose the former as the latter puns on Bishops starting in a position analogous to Shogi generals, which they do not in CD'A Chess.

A more radical departure is FILLED CD'A CHESS, in which the 4 centre cells are restored and a Pawn rank of some kind added. It has 84 cells, but like the four-file versions of my Tryzantine Chess it was invented much too late for the 84-square contest. It also unbreaks ten broken diagonals, making the diagonal moves more useful. I do not envisage four-player or Shogi-style 84-cell versions. 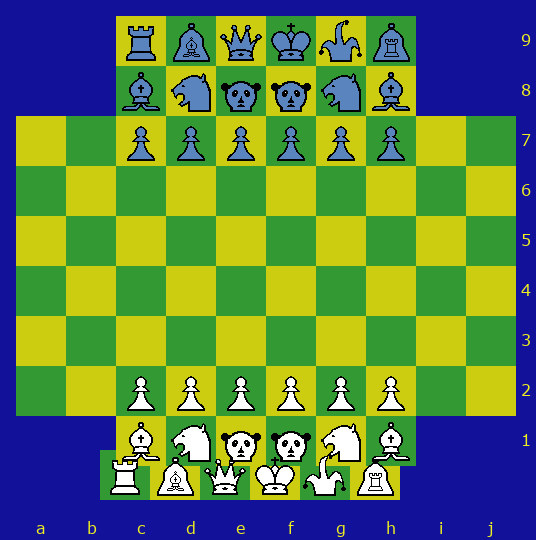 The simplest versions have 12 individual pieces aside of 8 types, with two each of the minor pieces. The Filled version adds six extra pieces of common type. I leave spotting the number of senses of the word common as an exercise! My piece article Man and Beast 06: The Heavy Brigade includes a fuller list of pieces using odd-only (and even-only) moves. 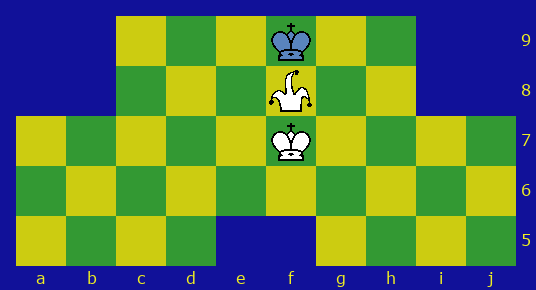 The rules for an odd-only move can vary, making for 6 times as many variants (48 in total!) as I assume that the same rule would be applied to all odd-only moves. I would be interested to hear analysis of their relative merits playwise. They are listed in order from the weakest to the strongest. With the first two the Pandas are blocked by the Pawn rank in Filled CD'A Chess, and first-rank pieces blocked by second-rank ones in all versions, but even with the later ones capturing an enemy piece on its home rank would leave the captor itself open to a revenge capture.
(1) Stepping: no moves through occupied cells;
(2) Even-leaping: the default form for the established Panda, a King move followed by a series of leaping Alibaba moves in the same direction, blocked by pieces on odd cells but not even ones;
(3) Odd-leaping: the reverse of the above, a series of leaping Alibaba move followed by a King move all in the same direction, blocked by pieces on even cells but not odd ones;
(4) Alternate-leaping: the King move can be at either end (but not both in the same move), so that intervening pieces on odd and even cells can block the move;
(5) Flexi-leaping: one King move anywhere within the complete move - I leave blocks as an exercise for the reader;
(6) Maxi-leaping: any combination of King and leaping Alibaba moves in one direction, as long as the total is an odd distance, blockable only by intervening pieces on successive cells.

As each player's King and Rook are three cells apart Rookwise they can Castle, the King moving to the Clown cell and the Rook to the Queen one. The destination cells must be empty. Castling into, out of, or through check is not allowed.

In the Filled version Pawns (or Yeomen if you use them instead) have an initial noncapturing double-step move. They may immediately be captured En Passant by enemies of their own kind. They may be promoted to any compound array piece.