Chess+ was jointly invented by Nick Bentley and Christian Freeling in late 2018 and early 2019. The invention was motivated by perceived shortcomings of Fischer Random Chess. Chess+ is intended to reduce the reliance on opening books without presenting players with randomized positions they did not choose.

Though independently invented, Chess+ is similar to Pre-Chess, with two new innovations:

The board starts with each player's pawns lined up on their second ranks and the remaining pieces "in hand". The yellow circles mark locations where pieces may be entered. 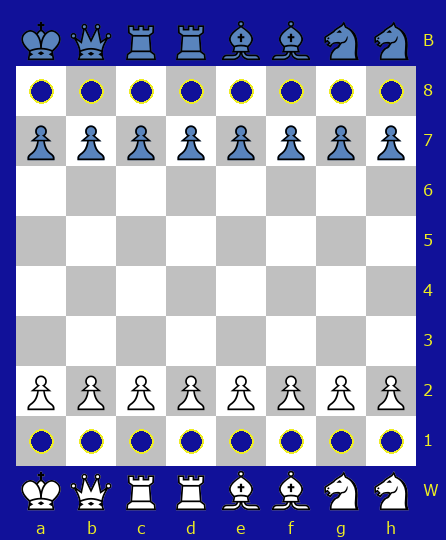 As in orthodox Chess.

On their turn, a player must do only one of the following:

Castling is disallowed. (Since the king and rook can simply be entered in their "castled" positions, there is no use for castling.)

En passant applies as in orthodox Chess, whether the pawn to be captured double-moved on its own or in conjunction with a piece entry.

Other rules are as in orthodox Chess.

The King may not be entered any later than the eighth turn.

A player may enter a piece without moving the pawn, move away the piece, then enter another piece on the same square.

If none of a player's pawns remain on their second rank, said player may no longer enter pieces.

It is permitted (though inadvisable) to enter both bishops on the same color. 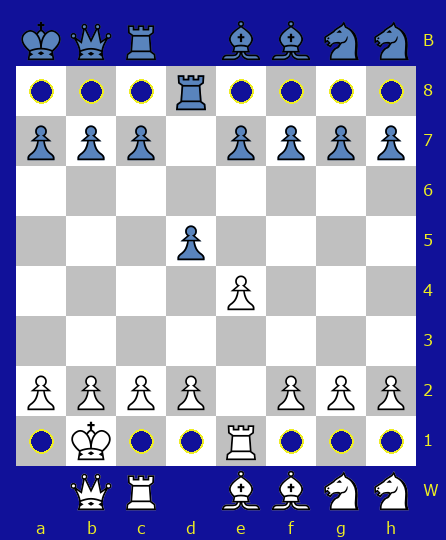 The diagram shows the position after 1. Re1,e4 Rd8,d5 2. Kb1. Black cannot yet make any orthodox Chess moves, but White can. Pieces may be entered on any marked square, or on b1 once the king moves away, but not on e1 or d8 even if the rooks move away (because the pawns in front of those squares have moved).