This is one game of chess, with one set of pieces, played simultaneously on two overlapping but independent chessboards, with pieces able to move freely and independently on each board.

Addendum, 2009: While this is an excellent idea in theory, unfortunately, this game is "broken". The optimism I displayed in the original notes below was unfounded, and the misgivings I expressed were not strong enough. It does not play properly; while initial playtesting showed that the game played, the current piece mix gives a really jammed up game, with too many pieces that are too weak. This game needs work. JJ 2009 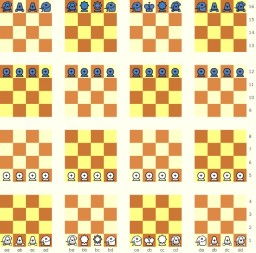 The pieces are set up as shown in the above picture.
You may click on the picture to get the preset.

Sliding General - This piece moves like the king, to any adjacent square, from which it may make another kinglike move. It slides 1 or 2 squares. It may not jump. It may change direction during its move. It may not make a null move [move off and then back onto its starting position]. It captures by replacement.

Guard - The guard moves one square in any direction, like the king, but is a non-royal piece. It captures by replacement.

Hero - The hero has a 2 part [step] move, a 1 square orthogonal slide [Wazir move] and a 2 square orthogonal leap [Dabbabah move], jumping anything next to it. It may use either or both parts of its move each turn. So, it may slide 1; or jump 2; or slide 1 and jump 2; or jump 2 and slide 1. This piece is a linear mover. It may not change directions during its move. If moving two steps, it must use both parts of its move; it cannot make 2 wazir or 2 dabbabah moves. It captures by replacement.

Shaman - The shaman, the diagonal counterpart of the hero, may slide 1 square and/or jump 2 squares in a diagonal line. So it may move 1, 2 or 3 squares diagonally, making its range the diagonal of a board. This piece is a colorbound linear mover. It may not change direction during its move. It captures by replacement.

War Elephant - The FAD. This piece may move like a ferz or an alfil or a dabbabah. So it slides 1 square diagonally; or jumps 2 squares either orthogonally or diagonally, leaping over anything next to it. It captures by replacement. The piece is colorbound.

Wazir - This piece steps 1 square orthogonally. While it is a replacement for the pawn, it does not promote. It captures by replacement.

White moves first and Black moves second in each turn.
Each player may move 1 piece in a turn.
A piece may move on either the Big Board Board or the Little Board, never both, during its move.
Each piece moves in exactly the same ways on the Big Board Board and the Little Board.
Capture is by replacement, with the capturing piece moving into the same square on both the Big Board and Little Boards as the captured piece, and ending its move there.
Victory is by checkmate or by baring the opponent's king without your king becoming bared on the immediately following move of the opponent, in which case it's a draw. If you stalemate your opponent, you win.

I'm not entirely sure what to say about this game. It can be seen as a two-, three-, or four-dimensional game, depending on just how you want to look at it. But it's no more three-dimensional than any game played on a flat board where you pick up pieces to move them. And it's only four-dimensional in the sense that 2D + 2D = 4D. The game is *flat*. It's meant to be as easy as possible to play. No piece moves more than 2 squares; and, though most jump, there are no tricky or difficult moves to see. While it's completely playable, I consider it a work in progress because I'm not fully satisfied with it; but it is the first of several designs that has actually given what I wanted, one game played simultaneously on two totally separate boards. Special thanks to Mike Nelson, who helped test some versions that were less than satisfactory before we liked this one. And also to Jeremy Good, who made the Hyperchess preset which I ripped off for this game.