The western game of Chess is a European adaptation of the Arabian game of Shatranj, which is itself based on the Persian game of Chatrang, which has its roots in the Indian game of Chaturanga. Unlike these earlier games, Chess replaced some slow moving pieces with faster pieces, and it gave the Pawns the power of making a double move and of capturing by en passant. This sped up the game and produced a greater symmetry between the pieces than there had been previously. It is related to east Asian games like Xiangqi and Shogi, and there is some controversy over whether its ultimate origins lie in India, China, or somewhere else. For more on that, see The History of Chess Variants.

Chess is widely played around the world, and its greater popularity is why we call games similar enough to it Chess variants rather than Shatranj, Xiangqi or Chaturanga variants. Unlike most Chess variants, it has official organizations behind it. These include the Fédération Internationale des Échecs and the United States Chess Federation, which both promote the game, sponsor tournaments, and provide official rules.

Chess is played on an 8x8 checkered board, the same as Checkers is played on. Each side gets sixteen pieces, traditionally referred to as White and Black. While pieces don't have to be strictly colored black and white, lighter colored pieces will normally be used for White, and darker pieces will normally be used for Black. The game is setup as shown below. Note that the closest square on each player's right should be light-colored. 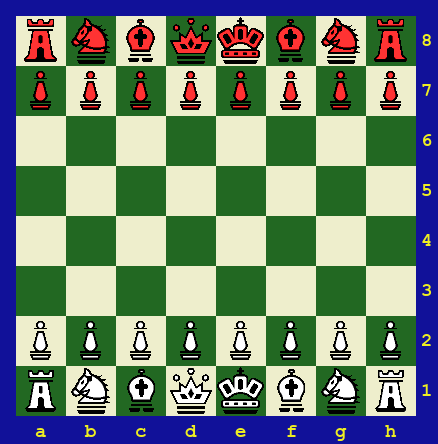 Algebraic notation is normally used to identify each space with a coordinate. Each vertical column is known as a file and marked by a letter, and each horizontal row is known as a rank and marked by a numeral. Together, the file and rank of a space give you its coordinate. The file letter is given first, followed immediately by the rank numeral. Using this coordinate system, here is how each side should be set up:

The pieces are described in order of increasing complexity. When first described, each piece is linked to a page giving more information about the piece. However, all you need to know about how each piece moves is given below.

The Rook may move across any number of empty spaces in a vertical or horizontal direction until it reaches another piece. If the piece belongs to the player, the Rook may go no further than the last empty space before the piece. But if If the piece belongs to the opposing side, the Rook may capture it by moving to its space. The captured piece is removed from the board and taken out of play. The diagram below shows the full range of movement for White's Rook, and it shows that Black's Rook is blocked by two Pawns. It can capture the White Pawn, but it cannot capture its own. 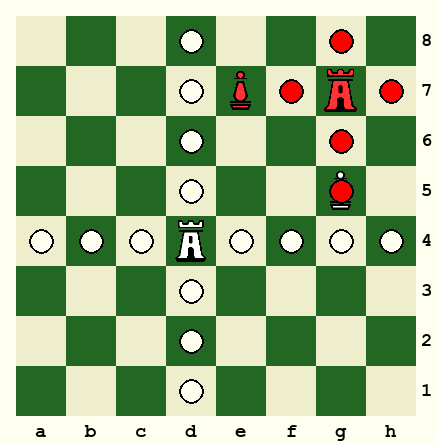 The vertical and horizontal directions are collectively known as the orthogonal directions. The word literally refers to right angles, and the most fitting definition from the dictionary is having a set of mutually perpendicular axes; meeting at right angles . Orthogonal movement may be thought of an movement along a single axis of the board. Each file is a vertical axis, and each rank is a horizontal axis. These are sometimes also called lateral directions, which means directions going through the sides of spaces. This term works better for some boards with unusual geometry, such as hexagonal or spherical boards, but either term works for the Rook in Chess.

The Bishop can move across any number of empty spaces in a diagonal direction until it reaches another piece. Just like the Rook, it must stop short of its own pieces, though it may capture an opponent's piece in its path by moving to its space. The diagonal directions go through the corners of spaces. Since each space at each corner of a space is the same color, the Bishop's movement is colorbound. Each Bishop can cover only half the board, and Bishops on opposite colors cannot protect or capture each other. 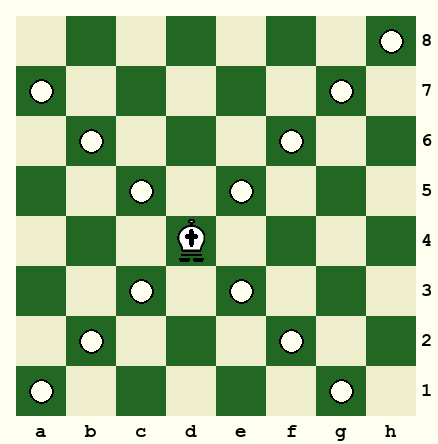 The Queen can move as either a Rook or a Bishop. 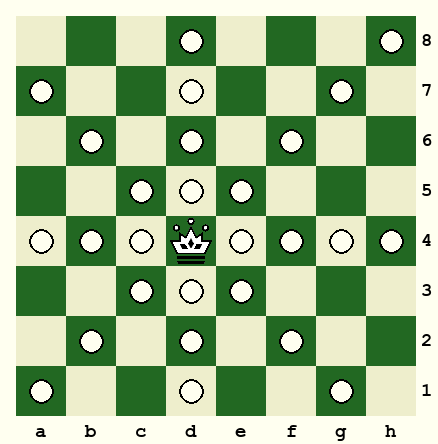 The Queen is known as a compound piece. This kind of piece combines the powers of two or more lesser pieces. While not used in Chess, the Knight/Bishop and Knight/Rook compounds are popular in other Chess variants.

The Knight can leap directly to any space at the other corner of a 2x3 rectangle. As shown in the diagram below, the Knight on d4 can reach e6 or f5 even though there are other pieces standing between the Knight and those spaces. 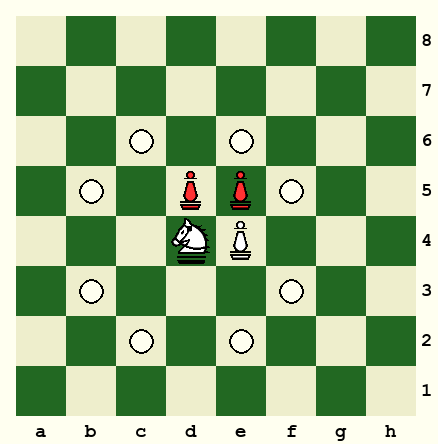 The Knight is commonly described as a 1-2 leaper. This means it leaps to a space that is one space away along one axis and two spaces away along the other. Other sorts of leapers are used in other Chess variants. For boards with more unusual geometry, the Knight's movement might be described in less mathematical terms. For example, we might say that it leaps directly to any non-adjacent space that can be reached by a single orthgonal move and a single diagonal move, or we might say that it leaps directly to any of the nearest spaces not on the same rank, file, or diagonal. Either one works equally well for the Knight in Chess, though each might work a bit differently on other boards.

The King moves one space in any orthogonal or diagonal direction, though it may not move where it may be captured, which is called moving into check. In the diagram below, White's King may move to any adjacent space, but Black's King cannot move into the f file, because White's Rook could capture it on any space in that file. 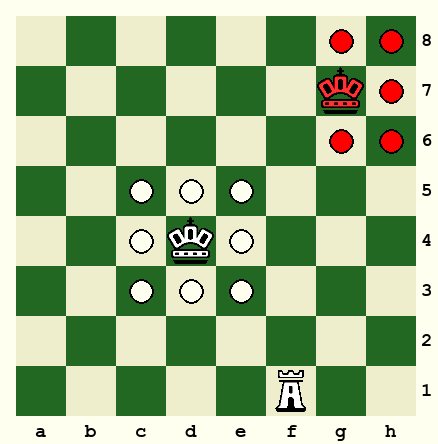 The reason the King may not move into check is that the object of the game is to checkmate the opponent's King. A checkmate is a position in which the opponent's King is threatened with capture, which is called check, and the player has no legal move that could prevent the capture of his King. The following diagram shows an example checkmate, and it illustrates how the three usual ways of escaping checkmate are unavailable to Black. The King has no place it can safely move to escape check, and the Knight cannot capture the checking piece or block the check without exposing the King to check from the Bishop. 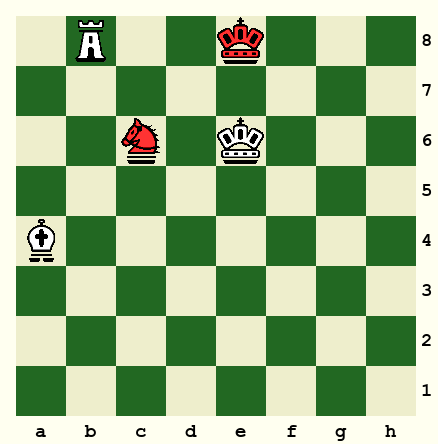 For more on check and checkmate, see the Check, Mate and Stalemate FAQ. 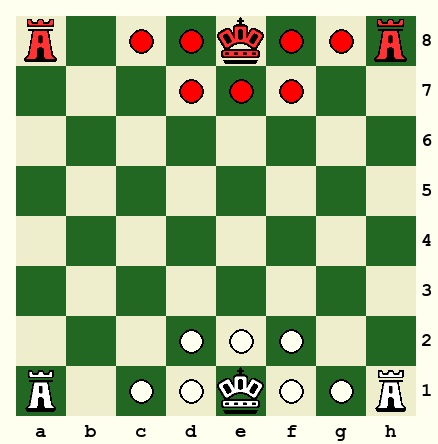 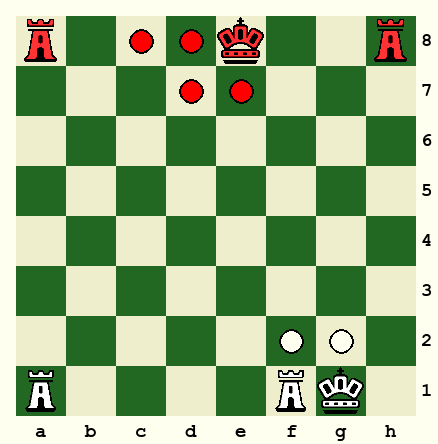 After White made a King-side castle, the Rook moved to the f file, where it threatens f8. As shown in the diagram, the Black King can no longer move to f8 or move over it to castle with the Rook on h8. 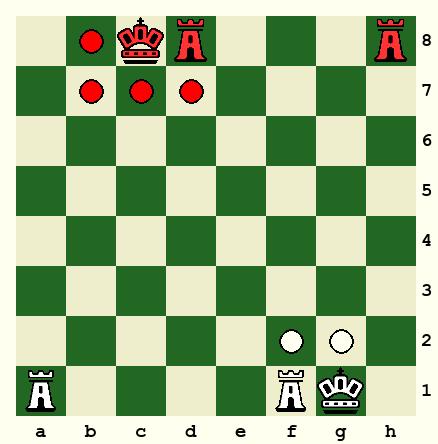 For more on castling, see the Castling FAQ.

While the other pieces all have completely symmetrical powers of movement, the Pawn does not. The Pawn may move one space straight forward to an empty space, or it may capture a piece by moving diagonally forward. On its first move, a Pawn may move two spaces forward to an empty space so long as the intervening space is also empty. In case another Pawn could have captured it if it had moved only one space, that Pawn may capture it en passant on the very next turn, though not on any later turn, by moving to the space it passed over. Note the following details in the diagram below: 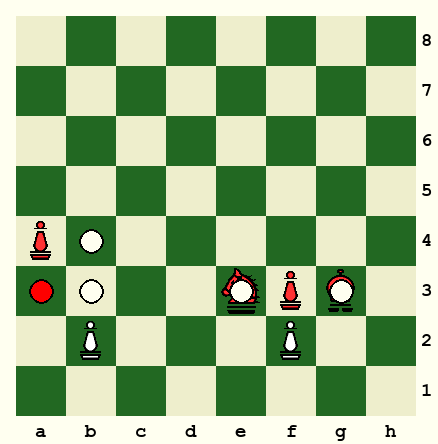 Upon reaching the last rank, a Pawn must promote to any other piece except a King or another Pawn. While the Queen is the most popular piece to promote a Pawn to, there is sometimes cause for underpromotion, such as a checkmate position that requires a Knight or avoiding a stalemate position. For more on the Pawn, see the Pawn FAQ.

FIDE and the USCF differ on how they handle draw claims. For FIDE, the player just has to show that the condition applies. For the USCF, a draw claim is a draw offer, and it must be accepted by either the director or his opponent. Unlike stalemate, which is an obvious game-ender when it happens, the other draw conditions are things that someone could miss. Since FIDE and the USCF are both concerned with managing over-the-board games between human opponents, it makes sense to leave it up to the players to catch these conditions. However, computer programs can easily keep track of details like position repetition, captures, Pawn moves, and the material on the board. So, computer programs for playing Chess may sometimes handle these draw conditions automatically instead of relying on human players to catch them. Also, computer opponents may not be programmed to make or accept draw offers. So, the rule that the game is drawn when both players agree to a draw may not come into play when playing against a computer.

Both FIDE and the USCF have rules concerning the touching of pieces. The main rule is that if you touch a piece that you can legally move without previously stating an intention to adjust it, you must move that piece. This is mainly a tournament rule and may be ignored during informal play unless the players agree to it ahead of time. It makes sense to ignore this rule when playing against a computer program or with the assistance of one. There is no actual touching of pieces when playing on the computer. The closest analog is clicking on a piece with a mouse or tapping on a touchscreen, and sometimes because of software glitches, such as a page shifting at an inopportune time or the computer moving more slowly for a while, someone may click or tap the wrong piece. Additionally, programs for playing Chess often show you legal moves when you click on a piece, and some allow you to preview a move before making it, which are both helpful in preventing you from accidentally making a move you didn't intend to make.

FIDE and the USCF are both focused on organizing touranaments between people who play face to face in a structured environment that has a referee present, and to better facilitate this, they have various rules governing the mechanics of the game, the resolution of conflicts, the conduct of players, and other details. These are not essential rules of the game, and they may be ignored for informal or computer play. For more on what these rules are, you should consult the most up-to-date rules of your tournament's sponsoring organization. Our website is not affiliated with a specific Chess organization, and our software for playing Chess normally ignores the various tournament-specific rules.