This game is an attempt to develop a game on a large board that does not suffer from some of the problems that normally plague such games, namely too many pieces, too many tactics overwhelming the strategy, and the game running on for hundreds of moves. It is played on a board with 16 files and 12 ranks, and has mostly short-range pieces. 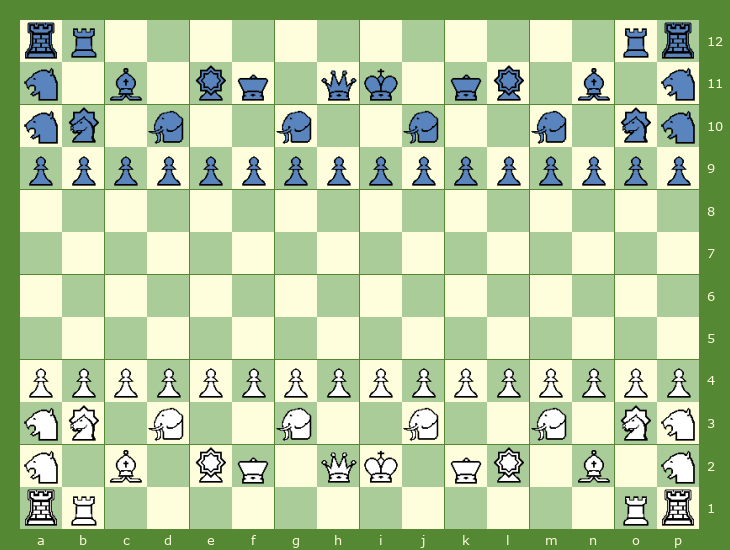 The King, Queen, Rook, and Bishop are as in Orthodox Chess. The other pieces move as follows:

Grand Rook: The Grand Rook can move as either a standard Rook, or as a Cannon from Chinese Chess (that is, it can capture an enemy piece by leaping over exactly one piece of either color and capturing the first piece beyond, if that piece is an enemy piece.)

Sorceress: The Sorceress is a 2-space area-mover. She may make either a single step in any direction as a King, or may make two consecutive steps in any direction and may change directions in between. The only limitations are that the Sorceress may not return to her original square (thereby making a null-move) and may not capture a piece on the first move and continue on - her move ends with any capture.

Pawn moves: The pawns move as they do in Orthodox Chess, except that they have an additional option for development. A pawn that has not moved may move two spaces forward, subject to En Passant as in Chess. But a player also has the additional option of moving two different pawns forward a single space on the same move provided that (a) neither pawn has moved before, and (b) neither pawn is moved to a position where it attacks an enemy piece.

The values of the pieces are hard to determine. The best pieces are the Queen and the Grand Rook. After that, it is difficult to tell. The Rook is better than the Bishop. The Tiger might be better than the Elephant. The Centaur is probably better than a Tiger or Elephant. The Duke is better than a Tiger or an Elephant, probably about the same as a Centaur, and almost certainly not as good as a Sorceress. But is the Sorceress better or worse than a Rook or a Bishop? It depends on the situation. The Sorceress has serious short-range power, but the Rook and Bishop may fly all the way across the board. Is a Bishop better or worse than a Duke or a Centaur? It all probably depends on position and strategy.