When I created the variant Isis I remarked that it concentrated the strength of the FIDE (and Anglis Qi) back rank in just 6 pieces more accurately than Lilliputian Chess by not combining the Bishop with a non-colourbound piece. Caliph Qi extends the same principle to the Modern Kamil army and Tor Qi the Wildebeest Chess one. Those variants add a fourth simple piece, the Camel, sharing the Bishop's colourbinding, so the combining of the non-colourbound Rook and Knight from Isis is matched by combining the colourbound pieces to form the Caliph. As the most famous seat of Caliphs was at Baghdad, in what was then known to Europeans as Mesopotamia - literally "between the rivers", I made the further change relative to Isis of having two Rivers, enlarging the board to 9 ranks so that it can comprise three equal portions, with the 125% Xiang Qi restrictions on relevant pieces. Caliph Qi refers to Caliphs replacing Anglis Qi's Bishops (Anglemovers). Tor Qi puns on the English seaside resort of Torquay, now part of the borough of Torbay. In the sitcom Fawlty Towers, Basil (John Cleese's character) rants to a guest: "What do you expect to see from a Torquay hÃ´tel... the hanging gardens of Babylon [in Mesopotamia]... herds of Wildebeest [synonym for Gnu, as animal and piece] sweeping majestically..." See also Gnu Qi. 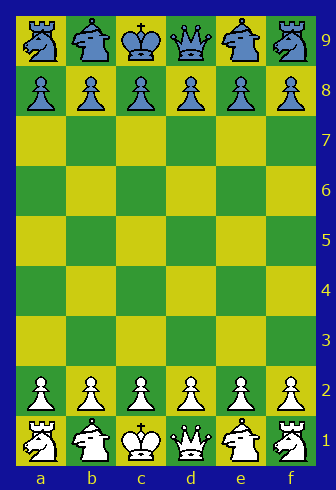 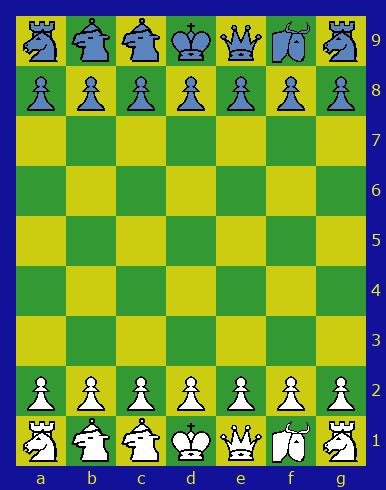 As in 125% Xiang Qi, each player has their own River. It is between their third and fourth ranks, and as there are no Fortress restrictions all their pieces can cross this freely and unaffected. The King, Queen, and Gnu, however, cannot move or Check across the enemy River. Pawns crossing the enemy River are promoted to Wazirs. As the Pawn trek is much longer than in Isis, Pawns have their FIDE double-step move and En Passant. Wazirs crossing their own River are optionally promotable to any stronger piece that the enemy has captured. Kings cannot be adjacent when both are between the Rivers, but a King on its third rank can check an enemy King adjacent across the adjoining River. This differs from Anglis Qi/Isis, whose Kings can remain adjacent across the one River with neither in check, and also from 125% Xiang Qi, whose Generals cannot even reach an enemy River. There is no Castling. Checkmate and Stalemate are as in FIDE Chess.

To clarify the relation between the variants, I list here the number of pieces with each kind of move in six variants' armies. Each has exactly one King of course.