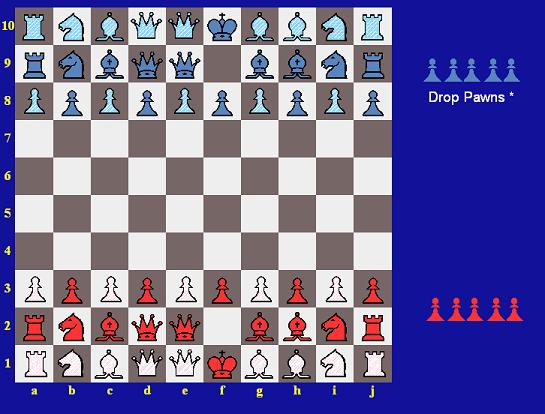 Win by one of three methods: (a) checkmating your opponent (b) making it impossible for your opponent to move, or (c) by capturing his King if it is in a (0) OFF state. Pieces change state from OFF(0) to ON(1) and visa-versa. The solid pieces are in an ON state (1) and can move and capture. The light cross-hatched pieces are OFF (0) state and cannot move. On your turn to move, if you (a)have all zero-state pieces and (b) have no pawns to drop (see rules) you lose. See setup and rules. Link to pre-set: /play/pbm/play.php?game%3DBinary+1010%26settings%3Dred_blue