This variant was inspired by two existing ones. K?l Karakus' Besiege Chess and David Short's Double Chess both involve taking 2 FIDE sets and changing the Kings on one to third Queens. The first then joins the two Black camps back to back.involves is, the second splits the two-Queens board between the Queen files and sticks the King board in the middle. Sergey Sirotkin's Full Double Chess is a further development of Double Chess - or perhaps more accurately of Ralph Betza's Doublewide Chess as it has two Kings - using two sets of Tutti Frutti Chess pieces. Furthernmore, I have occasionally suggested a Besiege subvariant replacing one King and Queen aside with a Cardinal and Marshal.

Well here is a variant combining all those ideas simultaneously. This takes 4 FIDE sets, replaces 2 Kings and Queens aside with Cardinals and Marshals, and a third King with an Ace. 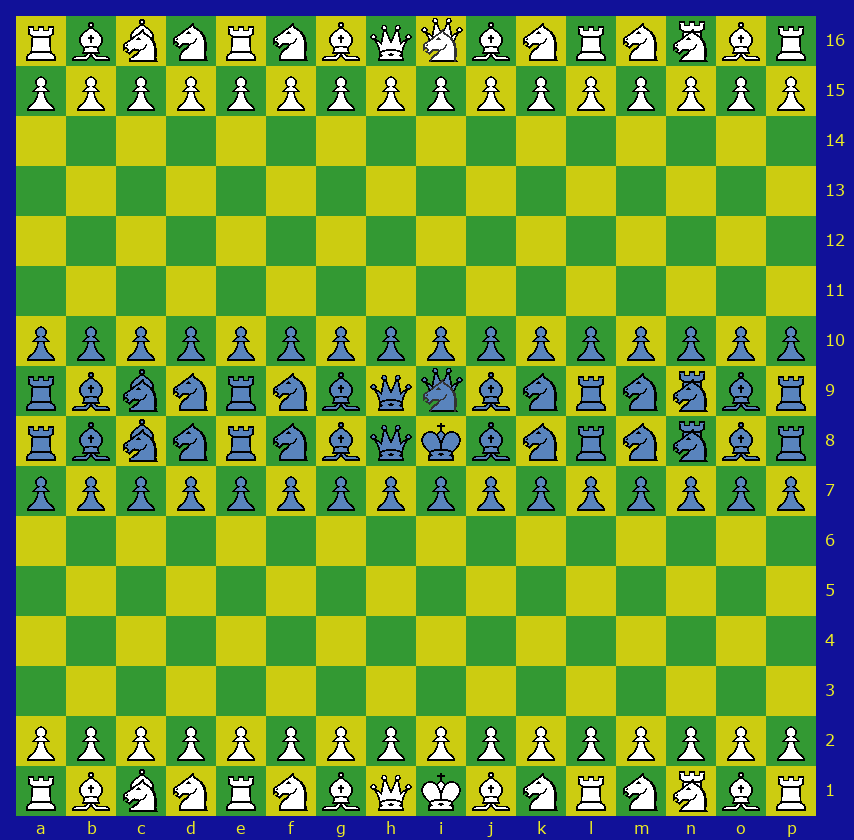 The PAWN, ROOK, BISHOP, KNIGHT, QUEEN, and KING are the usual FIDE pieces - except that all linepiecs have a range of up to 15 squares.

The initial double-step move and En Passant are as in FIDE Chess.

Castling with inner Rooks is as in FIDE Chess. Castling with outer Rooks differs in that the King moves 4 squres instaed of 2, but the Rooks still move to the King's last intermediate square.

A Pawn reaching an enemy non-Pawn rank must be promoted to another capturable array piece.

The variant can be played with 4 distinguishable FIDE sets, but 4 identical sets and an additional larger one are better. That way the pieces from the large set can be used to represent their Knight compounds. The spare pieces will come in handy for promotion. For the latter reason it is also logical to use the large King for the King.