This time I am applying it to a variant with a smaller-than-FIDE board, Doug Chatham's Bachelor Chess. The resulting game is correspondingly smaller than Nearlydouble Chess - though paradoxically larger than FIDE Chess! This combining and partial cancelling-out of enlarging and shrinking has echoes of one of my earliest variants, Bachelor Kamil, which combines the Wildebeest and Bachelor characteristics.

Pawn structure is based on Nearlydouble Chess. Again enhanced Knights are brought forward to the second rank, protecting front Pawns not protected by back Pawns. 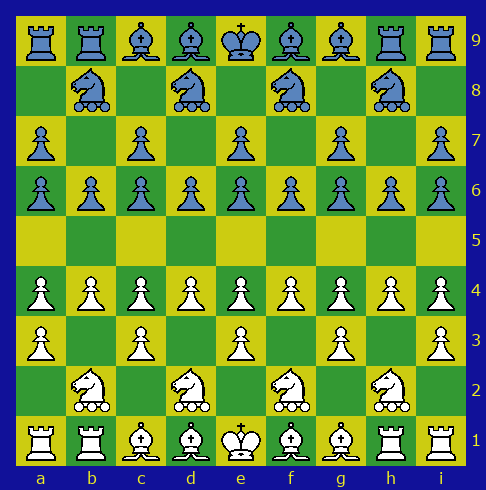 As the Knight comes out of the enlargement rather weak compared to other pieces - in this context weaker than the Bishop rather than stronger as is the case on the 7x6 Bachelor Chess board - I enhance it to the CATAPULT described in Man and Beast 08: Diverse Directions by adding the 3:0 leap, as unblockable as the 2:1 one. It is represented by a lion image as a pun on cat.

Other pieces are, as regards their general powers, the FIDE ones, although as with Bachelor Chess the Queen appears only as a promotee.

A Pawn starting on the third rank, but not one starting on the fourth, has an optional initial double-step noncapturing move. It can be captured En Passant by enemy Pawns, regardless of where the latter start.

Castling involves the King moving to the outer Bishop square and the Rook to the inner one. Restrictions are as usual. Whether Castling in a given direction is with the inner or outer Rook depends on whether the inner Rook is still there, as the outer Rook cannot move through it.

Pawns reaching a cell on the far rank must be promoted to a Rook, Catapult, Bishop, or Queen. They can also optionally be promoted on the enemy Catapult rank, but not to Queen and with no further promotion.

Check, Checkmate, and Stalemate are as in FIDE Chess. A player can also "win by marriage" by promoting a Pawn to Queen and bringing either that next to the King or vice versa. This final move must not put the King into Check. Two subvariants depend on whether a player can win by a "Medinese marriage" - with the Queen threatened but not the King, or the enemy can prolong the game by going through with capturing the Queen.

It may have struck you that Long Yang and Strong Yang could have subvariants allowing promotion to Queen (and possibly Tank as well) and win by marriage (and whatever the Tank analogue would be). Indeed they could, and so could Yang Qi itself. The variant adding just the Queen would be a way of getting that piece in without the larger Eurasian Chess board.

This board and Pawn structure also suit Nearlydouble versions of other 6-rank 7-file variants, again with Castling restored. Two examples are Aletheia and Camilla, whose Nearlydouble forms I show below. As Knight becomes Catapult so Camel gain the 3:3 leap to become Camper and Gnu becomes Achates, the compound of Catapult and Camper. 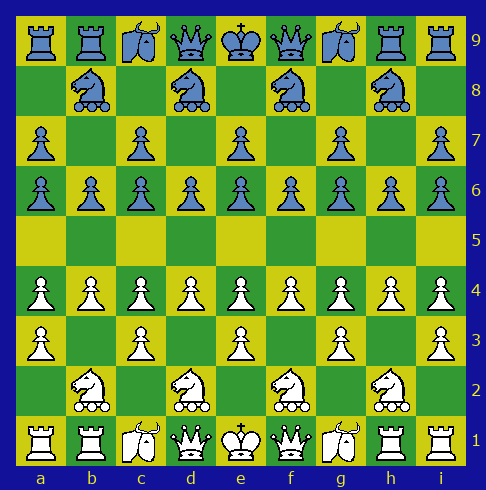 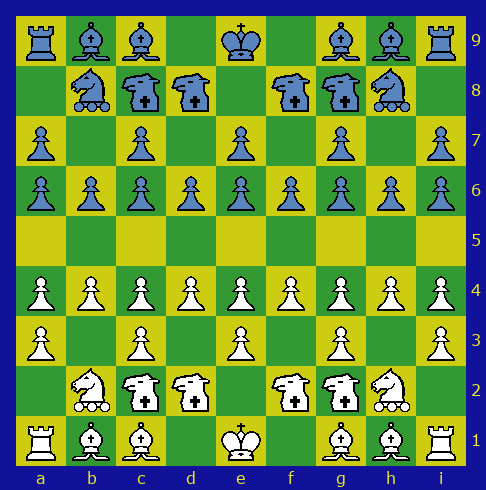 Nearlydoubles of corresponding 6-file small variants can be found here.