Apocalypse was invented by C.S. Elliott in 1976, was featured in Games and Puzzles Issue 53, and appears in Pritchard's Encyclopedia. 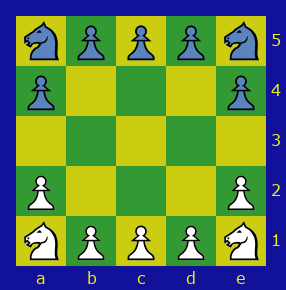 The knights ("horsemen") and pawns ("footmen") move as in chess, except that pawns have no initial 2-step and promote only to horsemen.

The two players move simultaneously (secretly writing their moves then announcing them together). If both players choose moves to the same square, then horseman captures footman, otherwise both pieces are eliminated. If a pawn attempts to capture a piece that moves away, the pawn's move is allowed as a non-capturing diagonal move. An illegal move incurs a penalty point, and getting two penalty points forfeits the game.

The goal is to eliminate all opposing footmen.

Some sources report that a footman can only promote to a horseman if the player has fewer than two horsemen; otherwise, the footman can be dropped onto any empty square.

A few things that aren't made clear, but I assume:

Apart from possibly using a blatantly illegal move as a pass, I believe illegal moves arise only by "speculating" pawns, betting on a piece moving into a square where the pawn will capture it or moving away from blocking the pawn's forward advance. (Is that right?)