Amazonia is played on an 11x11 board. The King lies at the centre of the back rank, flanked by four pairs of pieces on its left and right in the following order (closest to King first):

Eleven Pawns are placed on the third rank. 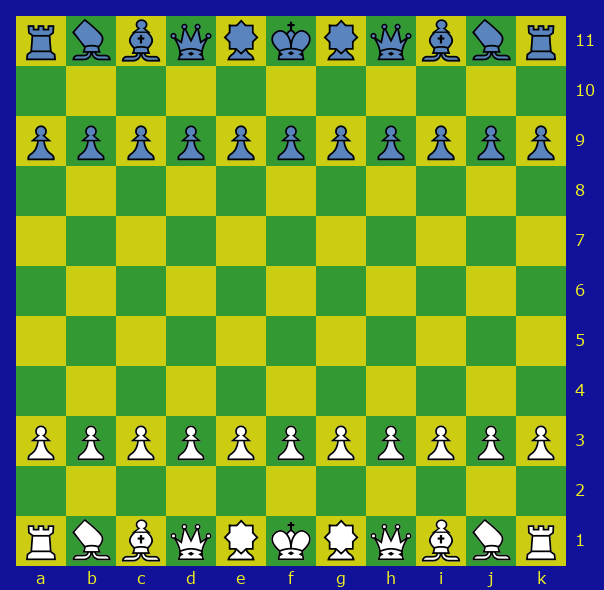 The King, Rook, and Queen move as in Orthodox Chess.

The Cannon moves as in Xiangqi.

The Archbishop is the same as used in Palace Chess. It moves any number of squares diagonally like a Bishop, or one square orthogonally without capturing.

The Princess is a new piece for this board. It moves one square in any direction like the King. It can capture like a King by moving one square towards the opponent, as well as sliding any number of squares orthogonally (similar to the Flying General move in Xiangqi or Janggi where the General can capture the opposing General when they are facing each other in the same file with no intervening piece) and diagonally. The diagram below shows the moveset of the Princess. It can move and capture into the squares highlighted by yellow dots, and can capture only into the squares highlighted by blue dots. Basically, the Princess moves like a King, and captures like a Queen. 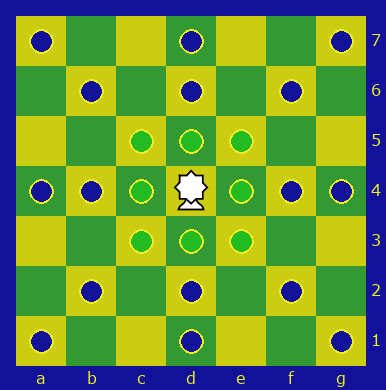 The Pawn moves as in Orthodox Chess, except for the promotion rule described below.

Pawns promote to Princess upon reaching the middle or 6th rank.

The King moves three squares towards the Rook when castling, same as in Capablanca's Chess.

Amazonia is an attempt to create a dynamic and fast-moving chess variant on a large board. Small-range pieces are avoided, and only pieces that can move or capture across the entire board are in the starting lineup. Expect a Pawn race to the middle of the board where Princesses can be born at any time, threatening the King with multiple aggressive Queen attacks.

Amazonia (The 11x11 board image for this Zillions of Games file is taken from Terror Chess.)