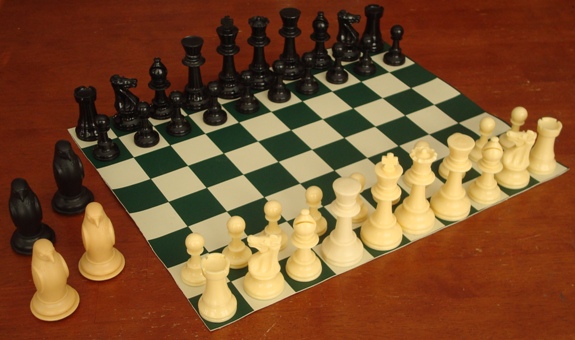 Ajax Falcon Chess is a Cabaplanca Variant that features Ajax Ministers and two drops of the new Ajax Falcons.

In the picture above, the Ajax Falcons are represented by Seirawan Hawks.

I had the pair of Seirawan Hakws for sometime, but had never used them. So I decided to create a new piece, initially based on the Korean Elephant, for my new Falcons. 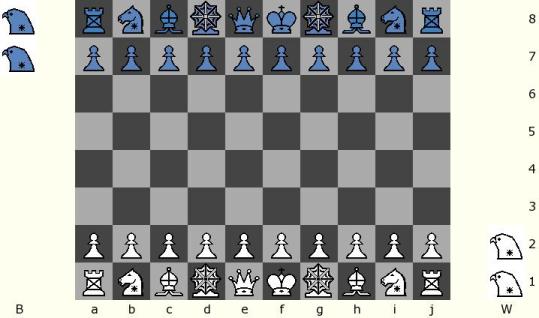 The Ajax Chess Setup is just like in Orthodox Chess, but with Ajax Ministers between the Bishops and the Royals (King and Queen).

At the start of the game, the Ajax Falcons start off the board.

The new Ajax Falcon has the combined movement of a Korean Elephant, Korean (or Chinese) Horse and Wazir, plus the characteristic Ajax one 'non-capturing' step in the remaining diagonal directions. 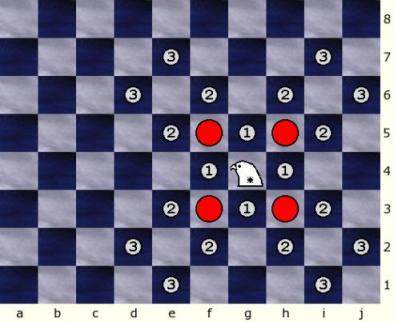 Ajax Falcons are improved Korean Elephants, which move one orthogonal step plus 2 diagonal steps. All squares in the path of the Korean Elephant must be unoccupied for the Elephant to reach it's destination.

The Ajax Falcon is NOT a leaper, so just like the Korean Elephant must also have the path clear to reach the 2nd diagonal square (labeled 3 on the diagram), but the Ajax Falcon can also move and capture at any square along the path to their 3rd square.

Finally the Ajax Falcon has a one 'non-capturing' step in the remaining diagonal directions (red circles in the diagram), like a Ferz, to complete the one-step movement characteristic of the Ajax pieces.

Ajax Falcons change color squares with every attacking move. They remain on the same color when moving on their non-capturing diagonal steps.

Two Ajax-Falcon's Drops are allowed per player on their first rank, per game. The Falcons must be dropped on any empty square on a player's first rank as their sole move in a turn; similar to dropping pieces in Shogi (Japanese Chess), except that the drops are limited to the first rank.

There is no restriction as to when (opening, middlegame or endgame) do players need to drop their Falcons, or even a requirement to drop them (players may play without any Falcons if they choose).

Players can only drop ONE Falcon per turn and the drops may not capture enemy pieces on the same turn.

The Algebraic Notation for a Falcon's drop is: (Fxx) including the parenthesis.

The Minister (enhanced Man or Commoner) is an additional short range major piece to the Ajax Chessmen set that can move AND capture on their one-square moves (just like a Man, circles in green above) or can also do a two-step leap in any direction (Alfil+Dababah - circles in blue above).

The Ajax Minister is the latest re-incarnation of a piece that has been known before as Pasha (Paulovits's Game by Istvï¿½n Paulovits - c.1890), Squire (Renniassance Chess by Eric V. Greenwood - 1980), Jumping General (Grand Shatranj) or Jumping King (Atlantean Barroom Shatranj) [both by Joe Joyce - 2006], and Mastodon or Mammoth (Mastodon and Mammoth Chess by Mats Winter 2006).

Pawns can play one or two squares in their initial move. They capture one square diagonally as in regular chess and may promote to any piece (Queen, Rook, Minister, Falcon, Bishop or Knight) upon reaching their last rank.

The Ajax Falcons start off the board (on the B and W files), and can be played right from there (W1 or W2 for White, B7 or B8 for Black) to their initial squares just as a regular Game Courier move.

The moves above would drop the White W1-Falcon to b1 (provided b1 was empty), and the Black B7-Falcon to g8 (provided g8 was empty).