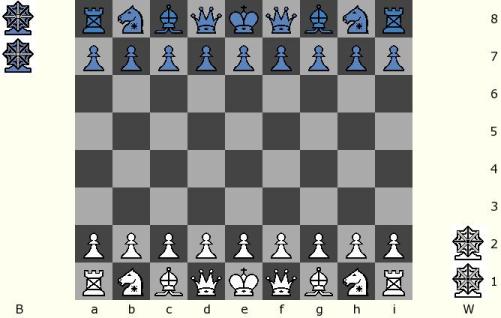 Upon the debut of Ajax Orthodox Chess in the 2009-10's Game Courier Tournament (#4): "An Introductory Semi-Potluck", Carlos Cetina commented:

"The additional Commoner moves to rooks, knights and bishops increases the complexity of the game in a manner so exquisite that immediately induces me to transfer the concept to the symmetric setup on a 9x8 board.

Jose: Would you like to try it? I bring forward a fantastic game! We could play it with or without dropping ministers, as you like.

The Ajax Bigamous Chess opening setup is as follows:

Both White and Black Ajax Ministers start off the board at the beginning of the game.

While both Bishops start off on same-color squares, the fact that Ajax Bishops can switch colors by means of their orthogonal non-capturing 'Ajax' moves, there is no need for any special rule to Adjust or Convert the Bishops to the opposite color.

The game can be played with or without any Ajax Minister drops altogether, it's the players' choice.

It does not matter whether you have dark or light square on your corners at the start of the game.

The Ajax Minister is the latest re-incarnation of a piece that has been known before as Pasha (Paulovits's Game by Istvan Paulovits - c.1890), Squire (Renniassance Chess by Eric V. Greenwood - 1980), Jumping General (Grand Shatranj) or Jumping King (Atlantean Barroom Shatranj) [both by Joe Joyce - 2006], and Mastodon or Mammoth (Mastodon and Mammoth Chess by Mats Winter 2006).