Despite my stream of recent updates it is a while since I have been able to put together and post a new page, as I have been busy with other things. As these other things include a general election it is perhaps appropriate that the first variant since should include armies shown here in the colours of the political parties now representing English seats in parliment and be able to be played Conference-style

My 3d variant Tunnelshogi has an unusual feature in which linepieces require four different faces for four states of promotion as each had three "crowned" forms. They start as the plain linepiece, gain either of two "crownings" on reaching the enemy camp, and gain the other as well to form the strongest pieces on returning to their own camp.

This variant uses the four faces of its pieces in a slightly different way. A piece can be promoted a total of three times, but has only one piece to be promoted to at each stage. This allows just three capturable array piece types, plus a neither capturable nor promotable King, to represent thirteen different piece types including all but the Point from Shogi and two other Mitregi pieces. In particular I preserve Mitregi's orthogonal-diagonal balance. Four of the enemy-territory promotions are also Mitregi ones, of which three in turn are original Shogi ones.

As I decided to name the variant after the alliterative (in English at least) distinctive physical feature of the pieces, I thought that it would make sense to give it four players as well, and decided to use the same board as Mini Fivequarters. Well I wasn't going to make it 4-dimensional, after some of the unflattering recent comments I made about using more than 3 spatial dimensions! This means that pieces actually have two kinds of simple 90Âº turn. Shogi itself uses three kinds of 180Âº rotation: a yaw around the axis at right angles to the board, for unpromoted pieces reintroduced after capture, a roll around the axis of the files, for promotion; and a pitch around the axis of the ranks, for promoted pieces reintroduced in demoted form. Unpromoted pieces reintroduced by an opposite player still yaw by 180Âº, and those reinroduced by a neighbouring player by 90Âº. Promotion involves a 90Âº roll. Reintroducing promoted pieces unpromoted can be either a 180Âº pitch or a more complex rotation.

The armies are named after the colours shown in this array diagram, even though pieces would not normally be coloured in physical play. It is subdivided into five 5x5 supersquares - I avoid calling them camps, which are technically only the two thirds of each where the pieces start. 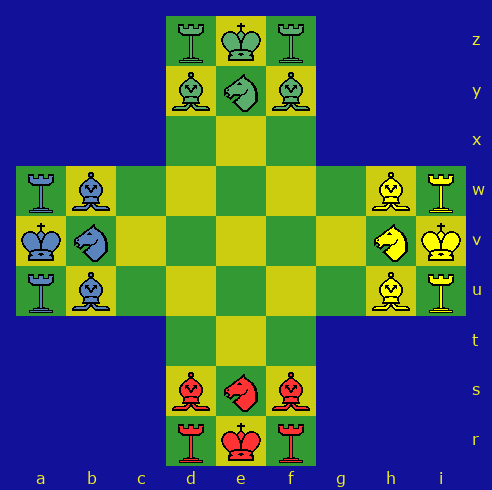 Play starts with Red, and continues anticlockwise. I was tempted to start this game with Blue, reflecting the descending order of votes and seats won this year, but as elections are ephemeral I decided to stick with the spectrum order of my previous cruciform variants.

A Knight or Helm leap, or a single step of a diagonal move, cannot be from one player's supersquare to another. An entire diagonal move may however include a step into the central fifth and another out.

A piece moving into, within, or out of any enemy supersquare can be promoted from Wing to Gold, Mitre to Silver, Helm to Knight, Rook to Chatelaine, Bishop to Primate, or Princess to Queen. If it had no further move unpromoted, promotion is required, otherwise it is optional. A piece moving into, within, or out of its own supersquare can optionally be promoted from Gold to Rook, Silver to Bishop, or Knight to Princess. A piece moving from one player's supersquare to another's cannot undergo both promotions, only that from its current form to the next up. Thus a Wing going straight from its starting square to that of an opposite-colour Wing can be promoted to Gold but not Rook, and must return to its own supersquare to become the latter.

When an enemy King is Checkmated the army is removed and the remaining players continue. The first player Checkmated loses and the last survivor wins.

As with both the original Fivequarters and Mini Fivequarters, Conference and Ringbearer subvariants can also be played.